If you would have asked me back in June if I would be running 6.3 miles along the Pacific Ocean for my first 10k, I wouldn’t have believed you.  Running has changed my life and while my first 10k was challenging for me, it was so rewarding!  I hope you’ll enjoy my photos from the Huntington Beach 10k Beach Derby! 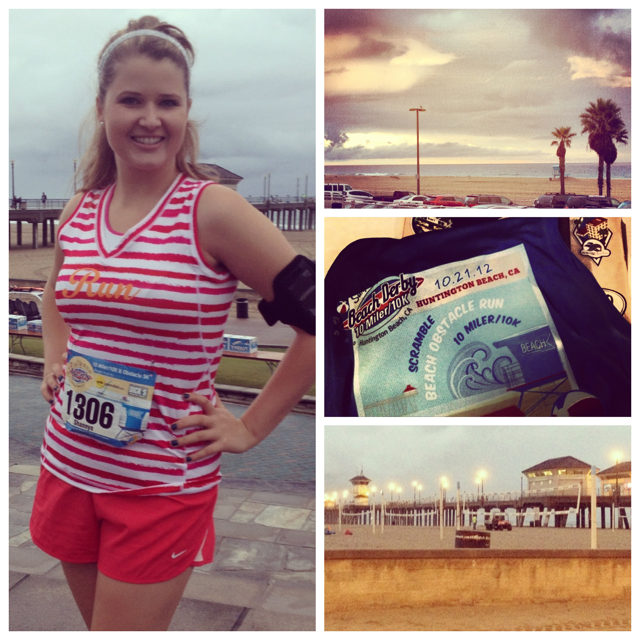 I woke up at 4:30 to make the drive up from San Diego to Huntington Beach.  Of course, I had my makeup on, pearl earrings and had to coordinate my outfit with my nails.  This time, I decided to go with the red/blue beach ball theme so I would match the medal, haha!  I got to sport my new Nike shorts & one of my cute tanks from Run Pretty Far.  It was about 63 degrees and slightly humid with a light rain, it was great running weather!

If you ever get the chance to run along the ocean, take it!  Even though my muscles were totally begging for rest at mile 5, the path was amazing and gorgeous.  The sea air is so refreshing, and if you luck out like I did and get a little bit of rain, it is such an exhilarating experience! 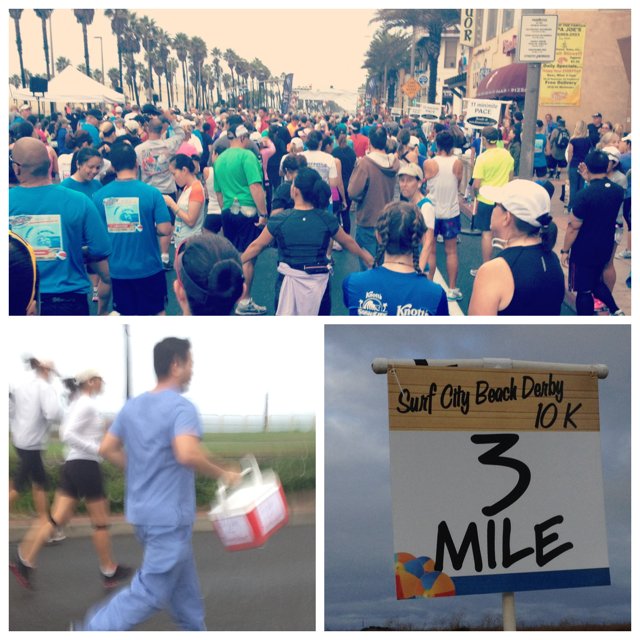 This was my first 10k, but also my first “big” race.  It’s not as huge as some, but bigger than the local events I’ve done thus far.  I loved the static in the air when we all lined up at our pace marks- it was hard to tell the difference between nervous fidgeting and warming up, it looks pretty much the same!  Runners are friendly people, even though I was running solo, there were plenty of nice folks to chat with and my amazing friends on Twitter were blowing it up with well-wishes!

Some people ran in costume, my favorite one being the guy whose blurry picture I captured while running.  Right after we started, from behind a pack of us, I hear, “COMING THROUGH, EMERGENCY ORGAN TRANSPLANT COMING THROUGH!”  Haha, he was an organ runner, in scrubs with a red cooler-  too clever! 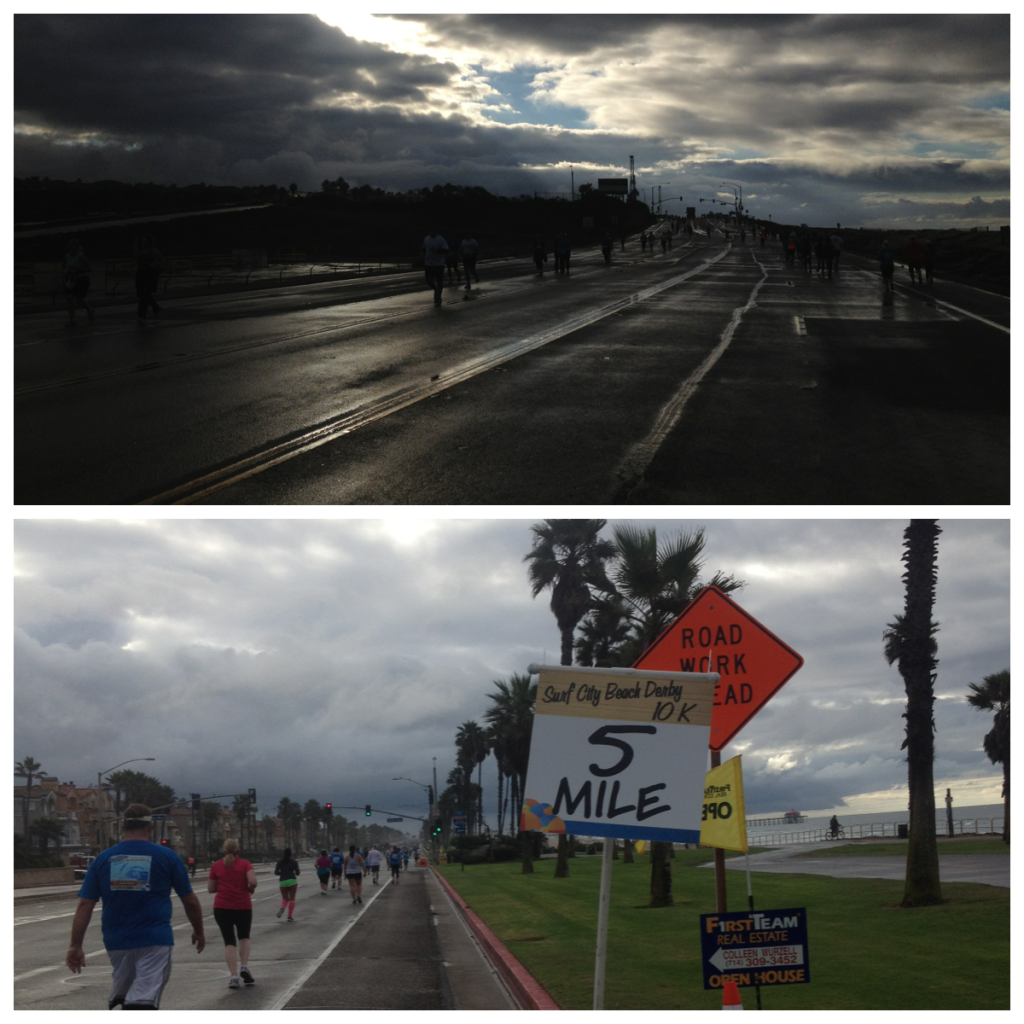 I learned so much from this run about myself.  When I first began running in late June of this year, I had no idea how to pace myself.  I literally couldn’t jog, it was impossible. I only had the stamina to sprint, then walk, then sprint again.  After this race, I’ve learned to pace myself to run for longer distances and exceed my own personal goals without totally exhausting myself.

During the run I’d find a visual marker-a  palm tree, a stop sign or mile marker and run for it, knowing that I just needed to run to that point then I could do a speedwalk.  I surprised myself several times when I could go past my marker and keep going without having to stop, it was awesome! I totally stand behind the run-walk-run method (seriously, it’s all I could do at first) but I’m getting so encouraged that I’m able to run more than I walk now! Woo hoo, progress!

I also learned that you can never judge a runner by shape, size or age!  There were people twice my size and twice my age that were damn fast!  Right at the end of the race, I was passed up by two 75+ year old women…granted, they were both seasoned marathon runners, but seriously- I hope I’m half as fast when I’m 75!  That was amazing!   I finished just a few seconds behind them (ya, I’ll admit they beat me!) but the experience will be one I never forget and what an inspiration!  Seeing what they are able to do keeps me running. 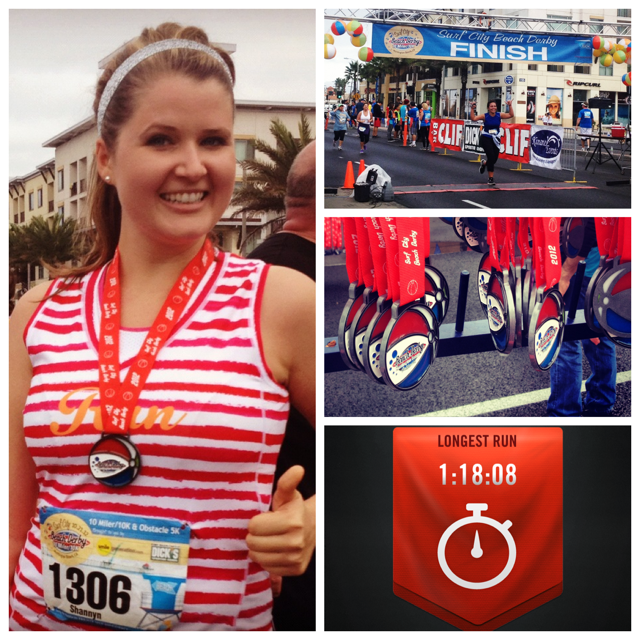 My first 10k was amazing- I am not the fastest runner but damn, am I persistent!   I still can’t believe I ran 6.3 miles- and yes, it was a personal PR!   I ran an average 12:24 pace, not fast but it’s mine!  Of course, this is only my second 6.1+ mile outdoor run but I was able to cut down my pace by nearly 20 seconds a mile from my last practice run 2 months ago.

The only bummer is that Nike+ didn’t record this as my fastest 10k ever (no cool award graphic to display) since I did 6.1 miles on the elliptical and that’s always WAY faster and not a real marker of true-pavement performance.  I wish I had a cool screenshot of Nike+ to display the achievement, but eh, I’ll take the medal and I know it was a PR, booyah!

Crossing the finish line was amazing, I will never forget my first 10k and can’t wait for the next race!

5 Ways to #FindYourHealthy This Summer