Rehab For Couch Potatoes: What I’ve Learned From Running (Part 2) 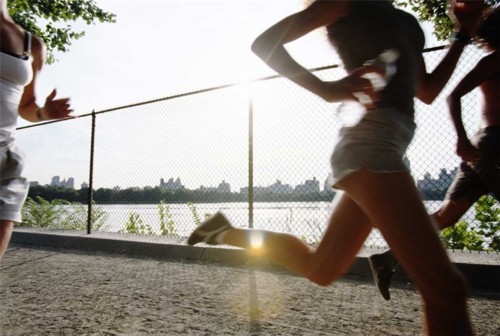 It’s true, I’m a reforming couch potato- don’t ask me how it happened.  I suppose I was just sick and tired of being sick and tired. Mentally & physically I was looking for a new challenge, and in just four weeks I feel like a different person.  Sure, I’m not ready for 5ks and marathon running, but I feel better about myself.  Additionally, after running a few days a week for a month, I have increased flexibility, sustained energy levels and my endurance has already seen dramatic improvements.

Oh, best of all? Sweat doesn’t give me the heebie jeeebies anymore and my running shorts are adorbs.  I’m really embracing this running thing!  I’ve learned a few lessons from my first few weeks of running that totally shattered my previous assumptions about running in public.

1.  You Don’t Need Strict Regimens, Just Get Out There.

Pro-runners and perfectionists be damned!  Ha.  No, but seriously, one  thing I learned from my first month running is that there is way too much information out there-  people take running (or being fit in general) really, really seriously.  They might try and be helpful by posting information or sharing advice that intimidates you.  Know that in the beginning if you can only run a block doing the simple stretches while wearing “normal” running shoes, that’s okay.

I always had this impression that “true runners,” got up at dawn, downed a protein shake and did a series of tai-chi/yoga stretches while burning the incense for the running Gods.  There have been times I failed to get up early, so I’d instead run after work in the evening.  Other times, I’ve had to adjust my schedule to accomodate a busy life but my point is to just GET OUT THERE.

My goal hasn’t been to run as the sun rises or measure my calorie intake- it was simply to habitually run 5 times a week, no matter when/how I did it, that simple.  Just get out there, freak out and plan later!

I had a discussion with a fellow runner a few days back since, as you can imagine- things were hurting.  Knees were sore, ankles were aching and yes, those poor ab muscles of mine finally got used!  When you start running, you have to pay attention to what your body is telling you- sometimes pain is simply a result of using an underworked muscle.  Other times, sharp/shooting pains are a sign that you injured yourself by not stretching properly or hydrating, etc.

Most of us newbies have “keep going” pain that we associate with “stop.”  Quite frankly, it’s uncomfortable being uncomfortable, and there will be days that waking up with tired muscles really, really sucks.  In the morning, I have a cup of coffee, some pain relievers and learn to improve my stretching.  Then I get my arse out there.

Truth be told, the pain gets easier when you just keep going.  You learn to adjust your stride, improve your stretching & listen better to your body.

3.  The Coolest Part Of Running Is Finally Being Able To Run Away.

I know this won’t be inspiring- but to me, it was hilarious.  A few days back, I had to run at night because I was out late the night before and morning running just wasn’t going to happen.  I started out when the sun was setting, just as the random drunk boys & hecklers were coming out for a night of partying.   I was keeping to myself, doing my run, and this guy starts heckling me with “Hey Baby” ‘s and the rest I’ll leave out, it was nasty.

Getting cat-called always sucks-  but when you’ve got your running gear on, you get away faster.  Try running in heels, it doesn’t work.  I know it’s weird, but I had a mondo bout of pride when I could leave that a-hole in the dust.

If you can’t mace a guy in the face, the next best thing is to lap his arse.  Don’t wanna hear him commenting on your dairy-aire?  Jog off!  Ha!

4.  For As Many Profesh Runners You’ll See Out There, Most People Are Just Like You.

There is space for everyone on the track, treadmill and the urban city streets.  Thinking of marathon runners lapping you might feel painful, but when you actually get out there, there’s a camaraderie around running.  Most people are struggling, no matter what level they’re at or how experienced they are.  Everyone’s pushing for their own goals, everyone’s breathing hard, trying to make it just a few more feet, and of course, we are all proudly sweaty.

I usually give people “the nod,” and a smile- we’re all out there for a personal goal, even if those goals are different for each of us.  My absolute favorite running experiences have been when I run into someone who is huffing, puffing and as pink-faced as I am.  We give each other a knowing smile and just keep going, as odd as it sounds-  it’s the best kind of encouragement you can get when you’re in the middle of it!

What inspires you to keep going on a project or goal?

How To Eat REALLY Healthy For Cheap…

PREVIOUS POST
"The World Domination Summit 2012: A Pair Of Spectacles For Your Soul"
NEXT POST
"Frugal Fashion: Flowy & Floral"
8 comments so far.

8 responses to “Rehab For Couch Potatoes: What I’ve Learned From Running (Part 2)”