Howdy y’all!  I write this from a friend’s apartment in downtown L.A.- we are about to hit the streets like total tourists, but before I head out for the week with the boyfriend, I have a hearty race recap from the Rock N Roll Los Angeles Half Marathon.  This time around, I opted for the mini marathon, but it was a 3.6 mile joyride, even with a few lessons learned! 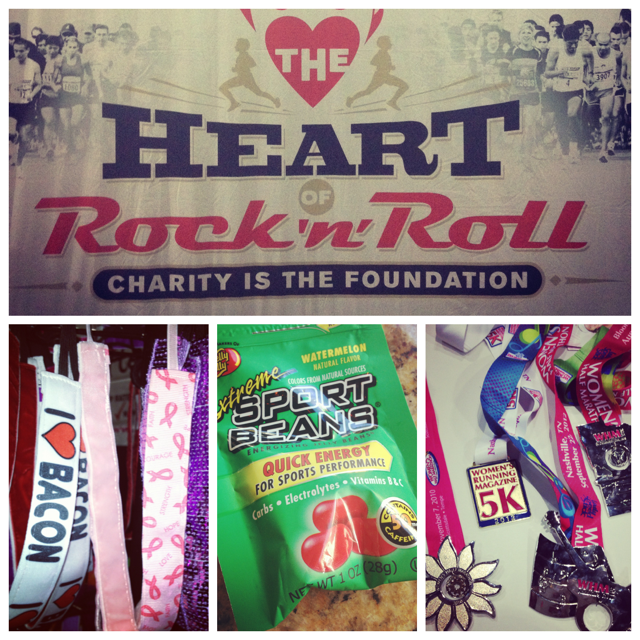 The Rock N Roll Marathon Series is a huge, nationwide, charity based race series that has events all over the U.S.  By far, this is the biggest race I’ve attended thus far- the expo we attended the day before was ginormous!  Many of the sponsors and vendors were there with tables full of goodies and exclusive deals for race goers.   I stocked up on some gear and lusted over medals for other races on my Fitness Bucket list, including the Lady Speed Stick women’s half marathon series, their medals are huge and gorgeous!

This Rock N Roll Race was a Halloween theme and my friends and I decided to go with a generic rock n roll/Halloween rockstar theme so I got dressed up in my Sugar Skulls Tank & Rock N Roll skirt from Ink N Burn and added as many temporary tattoos as I could, then we headed to the Staples Center downtown to line up.

Boyfriend Chris gave a rousing speech to help us power up for their 13.1 miles and my 3.6, reading the president’s spiel from Independence Day.  For my bf and his friends,”race prep,”  is a testosterone filled ritual composed of scissor kicks, Gu, Gatorade, gnarly movie quotes, carbo loading  & a solid watching of Arnold Schwarzennger in Predator the night before.  It’s over the top, ridiculous and powerful, I had a blast being let in on the crazy man-ritual…I applied my glitter nail polish and chuckled.  My race-day prep includes putting on pearl earrings, some glitter lip gloss and meticulously taking photos for Instagram… it was a lesson in masculinity this time around! 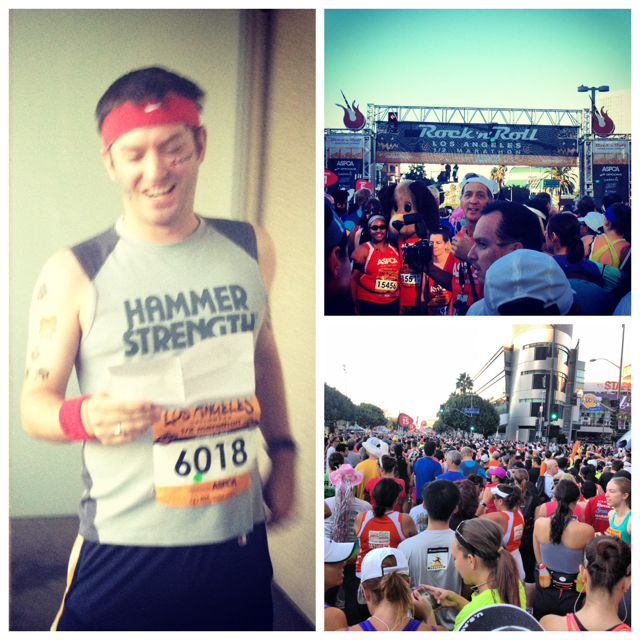 The Rock N Roll half marathon was huge and totally left me feeling a little overwhelmed.  I mistakenly typed in my pace and got put in corral 2 of 20 with the really, really fast kids.  I got intimidated and decided to move back to corral 15, only to discover that that wasn’t quite right either.  Apparently,  there are a slew of folks at this particular race who line up with the intention of walking the entire half marathon or mini- I was kind of shocked… luckily though, with some maneuvering I got around the walkers and did my best to not get stuck since I wanted to run this one. 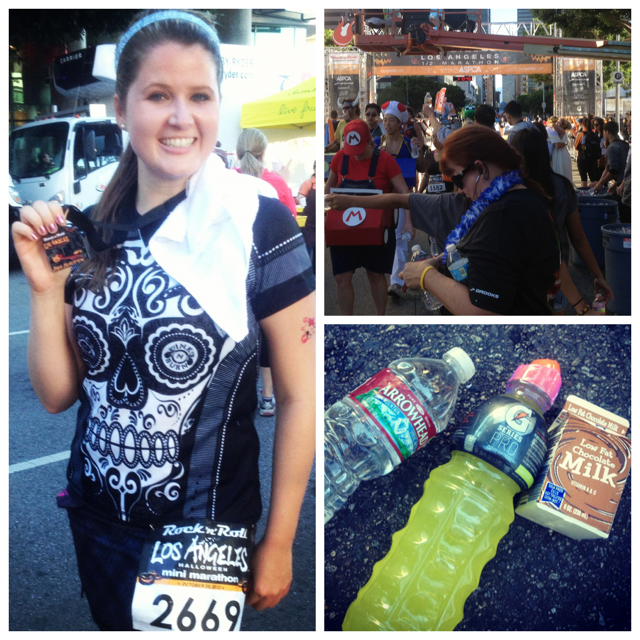 As my boyfriend and running coach has said, “Win some, lose some, wreck some.” This race was a total wreck for me-  because I travelled the day before and was having so much fun seeing him after 2 months and hanging out with friends in downtown L.A. I didn’t rest or hydrate as much as I should have.  Plus, I didn’t warm up as well as I normally do for smaller races- this one was so big I felt I had no room to move and went straight to my corral without proper warm up.

Needless to say, I didn’t perform very well.  I ran the first mile (whilst dodging walkers, lesson learned about corrals)  and then my feet started to cramp up.  Water wasn’t available until after mile 2 and while I’ve had the tendency to over hydrate in the past, the lesson was learned that under hydrating is worse.  I didn’t rock the Rock N Roll but I learned a lot and had a great experience.

I crossed the finish line in 42 minutes with an average 12 minute pace or so.  I did manage to beat some awesome kids in costume that came as the entire crew of Mario Kart.  The threw banana peels at each other and were a blast to run next to.

The Rock N Roll is a huge event, but you are well taken care of, as I crossed the finish line and grabbed my medal, I was greeted with Jamba juice, chocolate milk, bananas, pretzels, a wet towel, Gatorade, a dry towel and a Snickers marathon bar.  I could barely carry everything but it was delicious. 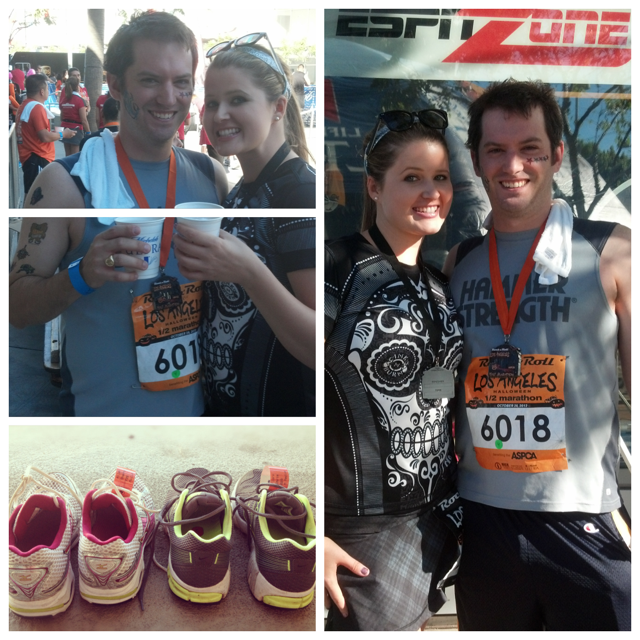 Boyfriend and I are doing the long-distance-relationship thing so this was our first time hanging out in two months, plus, this was our first race together.  Since I finished my mini marathon while he was running the half with his friend, I got to stand at the sidelines and watch him cross the finish line and it was one of those moments I’ll never forget.  I still have a long way to go before we unite again to run the Princess Half Marathon in February 2013 at Walt Disney World but I’m going to get there one step at a time.

Racing is truly a metaphor for life and love.  You have to get there a step at a time, persevere through the rough spots and focus on the finish line if you have to, but always take time to enjoy the journey because the journey is all you have.  Take time to celebrate your accomplishments, whether or not you feel victorious.  The further you go and the harder you push, just know, grabbing a free post race victory beer with the person you love makes every mile worth it.

Have any fun plans?

How To Do A Sock Bun For…