What You Need Really To Know About Your First runDisney Half Marathon (To Get The Best Photos and Not Get Injured!) 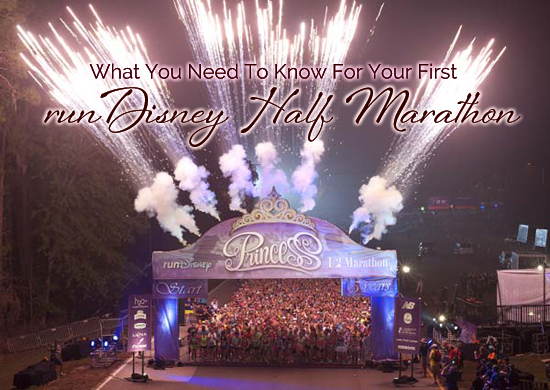 So, it’s you’re preparing for your first runDisney Half Marathon. Okay, BE EXCITED.  Yes, there’s plenty to prepare and fuss over, but for now, bask in the glow of the awesomeness that’s going to be your first runDisney event and after the giddy calms down, we can focus on details.

I’ve run the Tinker Bell Half Marathon and the Princess Half, plus I’ve run a few runDisney events and 5ks and later today, I’ll be heading out to Anaheim for the Disneyland Half Marathon.

Here are a few things I wish I would have known for my first runDisney Half Marathon, I hope they help you!

1.  Should You Hit The Parks Before Or After? I Say AFTER.

Every time I’ve flown somewhere for a half marathon my times always suck, I’m achy, tired and not performing at my best.  Since I’m already a slow runner, “best” is a subjective term, but I still feel the travel fatigue when I fly somewhere.  If you’re going to hit up Walt Disney World or Disneyland for your runDisney events, even one day of standing around in lines, hopping from park to park and eating junk food could lead you injury or “hitting the wall” when you get to race day- not good.

During my second runDisney event, the Princess Half Marathon, I enjoyed two days at the parks and ran the Royal Family 5k-  I tried to get as much sleep as I could, but come race morning, I was dog tired and during mile three my IT band pain was out of this world which lead to me hobbling through the half marathon for 10 miles.  Throw in the stress of travel, long hours on a plane, time changes, sleeping in a new bed and a variety of other factors- chances are, this will mess up your race ritual and you’ll be excited but exhausted.

If you have awesome knees and are an experienced runner, do the parks before the half.  If you’re new, have achy joints or are trying to really rock this race for a personal record- I’d say, visit the parks after the race!  Fatigue, stress and travel can impact your body in unexpected ways- remember, this isn’t just a vacation, there’s 13.1 miles of running thrown in there, you will feel it in different ways!

2.  The Weather At The Parks Will Throw Your Body For A Loop

A few things about runDisney races- they start early in the morning and if you’re not from California or Florida, prepare for some drastic weather differences.  For instance, California is always chilly in the morning and warms up quite a bit after the sun rises.  If you’re running in Florida, be prepared for fluctuating temperatures and humdity- you will need body glide and uber comfortable dry wic clothing.

Additionally, be aware of your home temperatures vs. the parks.  If you’re running the Disney World Half, Tinkerbell or Princess, chances are you’ll be doing most of your training in cold fall and winter temperatures.  When you arrive in Anaheim or Orlando, it will be much warmer (depending on where you live) and in Florida, you’ll have humidity even in winter.  When I ran Princess this year, the humdity was around 90% and it was humid- contrast that with cold Chicago winters and you get my point…body shock!

If possible, train inside for winter runs and crank up the heat or get used to running warm.  It takes at least 2 weeks for a body to adjust to warm temperatures when running- even if you can’t train in the heat, just be aware you might not have a “personal record,” but you will have a phenomenal time regardless!

3.  Do Not Count Minutes, You Paid For The Disney Running Experience, Not A “PR.”

One of the major draws of the runDisney race is to take advantage of gorgeous photo opps in the parks and to pose with characters during the event.  You’ll have fun dressing up, enjoying the parks when they’re reserved just for runners, and you’ll get to run through the backlots and have probably the most fun you’ll ever have running– ever.

While we all know that runDisney is all about having fun, what I will say is that you need to remind yourself again and again “time is not an issue,” as you stand in sometimes really long lines for character photos or at certain parts of the course (like it did at Princess) where it completely bottlenecked and it was too crowded to even jog- chances are, it won’t be one of your fastest races unless you’re fast enough to beat the crowds to characters, or, you blow past them entirely.

My advice, remind yourself to take the time to have fun. Lines can be long, crowds can be intense, but it’s a unique way to experience Disney and you’ll have amazing photos afterwards.  You can blow through 13.1 another day (when all you have to think about is beating your time), but for runDisney you have spent a lot of money and travelled far, so enjoy every magical mile.

4.  Getting To The Start Line at Walt Disney World Takes WAY More Time Than Disneyland.

There is a huge difference between runDisney events at Walt Disney World vs. Disneyland and it’s not just the location on the map- it’s the time you have to wake up in the morning.  When I did the Tinker Bell Half Marathon, the start line was right near Downtown Disney, so if you stayed onsite, you could walk to it within 15 minutes.  Even if you stayed offsite, the start line is easy to find and centrally located.

If you’re running a runDisney race at Walt Disney World, it’s a different animal- prepare to wake up a bit earlier and take a shuttle over to the start line.  That’s not all though- after you get to the start area, you’ll check your gear and still have a good hike over to the start line since the races are huge and the parks in general are much, much bigger.

When we ran Princess, I woke up at about 2:30 in the morning to catch a 3am shuttle, so I tried to get to bed at 7pm.  For Tink, I had more time- around 3:30am I rolled out of bed, dressed and walked to the start line. The races start at 5-5:30am, so even if you’ve done other 10ks, halfs or 5ks, chances are they started later, so be prepared for running in the dark, wee morning hours!

5.  Bring Your Smart Phone or Camera With You- Seriously.

As with any race, there will be photographers everywhere to get you rushing through the start line, smiling through the miles (or fake smiling just for the camera, wishing you’d hit that glorious 13 mile marker to get that medal!), and at all the characters.  First, it takes a few weeks for those photos to get processed and sent out, secondly, if you’re on a budget, these photos are going to cost you- usually around $30 each, even digital prints are pretty pricey.  Not to say it isn’t worth it to get solid shots of your epic first half marathon, but my advice is- don’t rely on photographers to capture your moment, have a backup plan!

The photographer team at the Tinker Bell Half Marathon did a great job of capturing some special moments, namely, I now have the picture of me posing on “Route 66” at Cars Land (my holy grail of Disney Spot) in my cute Tink Wings, grinning like an idiot.  The cast member on hand sadly had a shaky hand with my phone so it’s great to have that backup of professional photos.  What I will say though, is that I never got my photos from the Princess Half Marathon- they were never found, and weeding through hundreds of thousands of shots to find mine would be nightmarish to say the least.

My beau and I ran Princess side by side for a belated Valentine’s Day, it was our first time seeing each other in months (at the time we were doing long distance) and it was our first half marathon that we ran together-  you can imagine how heartbreaking it would have been to have no photos at all, so while my shots lack that glorious finisher’s shot where he and I crossed the 13.1 mark holding hands, well, at least we have cute shots in front of the castle and with characters!

If you’re not already using your smart phone to track mileage or listen to music, you can buy an armband at the expo, or get one even cheaper on Amazon.  Here’s one iPhone armband I use and it only cost $3 with shipping!

There is so much more advice I could give you- so expect posts on what to pack for your first runDisney half marathon, how to pick a costume that will be comfortable on race day, and how to save money on race weekend!

2 responses to “What You Need Really To Know About Your First runDisney Half Marathon (To Get The Best Photos and Not Get Injured!)”