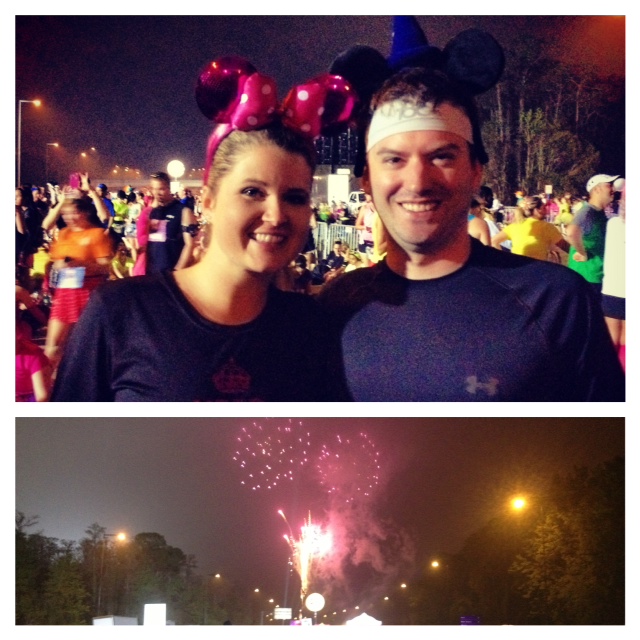 The Princess Half Marathon is like nothing you’ve ever experienced.  Not only is it more crowded than most runs, with many first time runners, but you can’t go into it expecting a PR since you (or the thousands around you) are going to want to stop for pictures.  Even if you  have done a runDisney half marathon before, the experience of the Princess Half is completely different-  not only do you have to get up around 2-2:30 am to grab a bus (since the resorts are huge!) but you’ll also have quite a trek from gear check to the start line. Expect to have an early, long morning before the race ever begins- but every Princess has her journey! 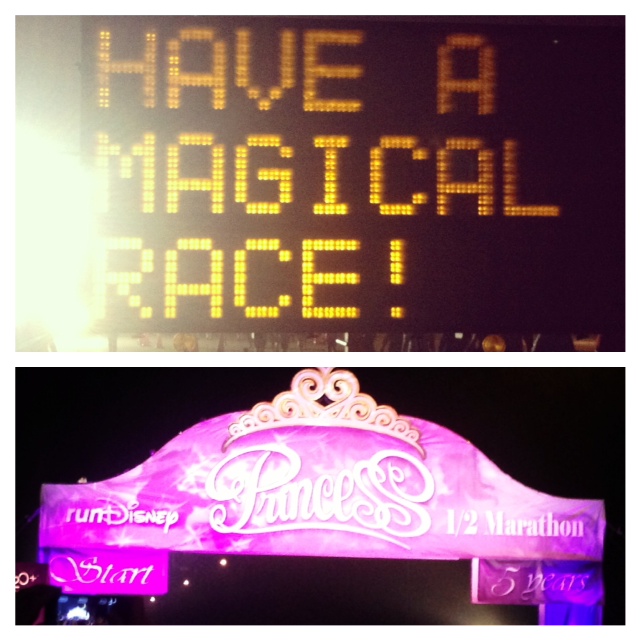 The start line was so exciting with fireworks going off with every corral.  I was standing next to my boyfriend, warming up and stretching and I was far more nervous this time than I was with my first half.  This was not only my first time running with my fabulous boyfriend (who is way faster than me) and having him slow down to my pace caused me some serious anxiety, but overall I wasn’t feeling as rested or comfortable this time.  My knees had been hurting off and on for the past few days after roaming around the parks, running the Princess Half Meetup and the Royal Family 5k the day before.

I had totally intended to ice my knees and go to the expo to get some KT tape, but the business of the weekend and the sheer insanity of the expo meant I had not secured either.  At mile 3 I started to notice some discomfort, by mile 7 it was sheer pain.  I would run a bit, walk a bit, hobble a bit and then eventually, I was walking since the shooting pain on the outside of my right knee (like a horribly pulled muscle) plus the ache in both was unbearable.  The first aid stops provided BioFreeze but it did nothing to help the pain. 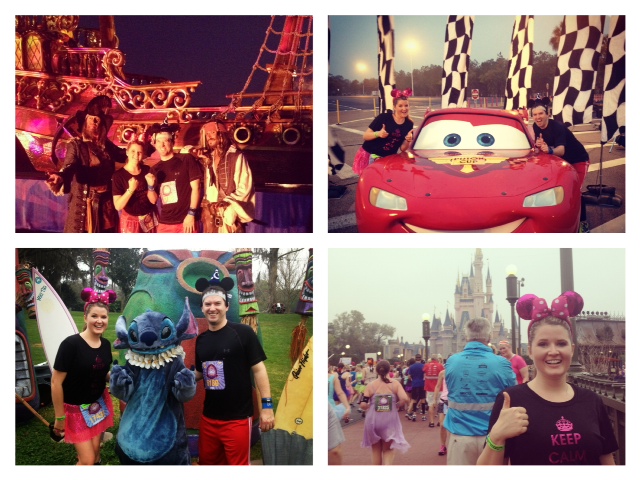 While the running itself didn’t go as planned, one big win was all the awesome camera shots and visits with characters!  If you’re a new runner, runDisney does a great job of breaking up the running with some optional character stops.  You can use your own camera but official photos are also available.  While it made me antsy to wait in some long lines for character photos while the clock was ticking, it was SO worth the fun shots. 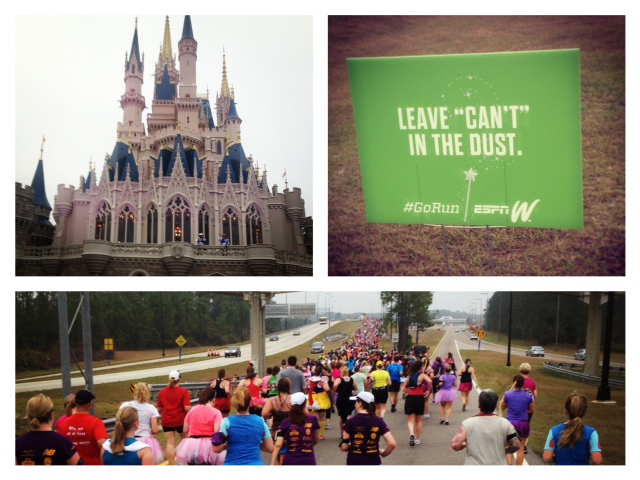 Lesson Learned: Unless you’re an elite runner at the front of the pack, you may get stuck in a mob of people slower than you if you stop for pictures.  We noticed at the Princess Half Marathon, being an average runner (or in my case, injured and slow to begin with!) if you stop for pictures, there are just so many people, you’ll be fighting the crowds to “catch up” to your goal pace or make up for lost time.  In other races, if you stop for the bathroom or get a picture, you typically have room to run- that was not the case with the Princess.

At times, the roads were so tight (or on a hill) that trying to really hit the pavement and blast through a mile was impossible.   Either run for fun, or run for time- due to the course on this race, it was harder than the Tink at Disneyland to do both.

Regardless of the race, I looked darn cute!  I wore pink sparkly ears from Disney World, my pink Team Sparkle skirt and one of my favorite tees from Runner’s Booty–  Keep Calm & Run On in black w/ pink foil.  How true it was! 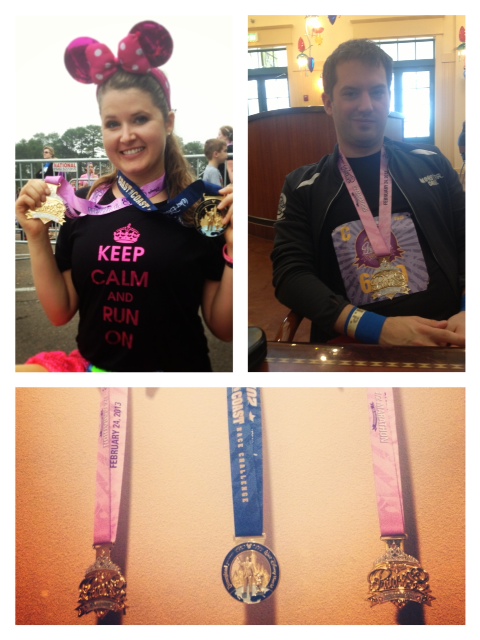 This was really my test as a runner.  There will be times that a race does not go as planned.  You get injured, the crowds are intense, the weather is hot and muggy, or you’re running with a new partner- you have to just roll with the punches.  While I had been told time and time again that this would not be a PR race, I found myself fighting back disappointed tears (in myself, not the race) that I could have performed better.  What I will say though, is that I totally found my Prince Charming from my race.  I must have begged Chris at every mile marker to go ahead without me since he’s a fast runner and didn’t have to hobble through the race, but he refused to leave my side.  He even grabbed my nasty sweaty hand (hey, it was 94% humidity out!)  for pictures so at least we could pretend we were rocking it!

Sometimes running is a test of your physical endurance, other times, it’s a mental exercise to get through- the Princess Half Marathon was amazing, but it was a test to overcome my own limitations and a challenge to forgive myself for a less than stellar performance.  I learned so much from that race, and most of all- even if the journey doesn’t go as planned, it’s still your journey, celebrate it and be grateful you’ve got someone you love by your side. 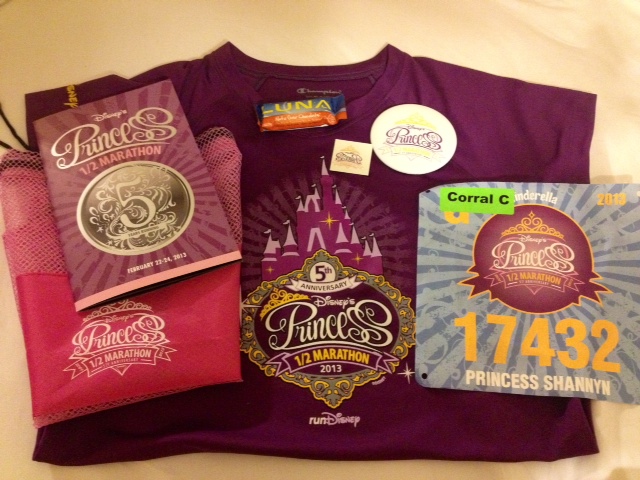 My advice for future Princess Half Marathon runners:  Know that this race will be crowded, possibly muggy & that you’ll be very aware of all 26,000 other runners on this tight course.  You’ll want to do this run for fun and enjoy your time in Orlando at the parks- it’s such a treat to see other runners wearing their medals in the park.  All Princess Runners get a discount on park tickets, so stay a few extra days and live it up and rest up the night before (read: 2:30am wakeup call!) and after (read: 13.1 muggy but fun miles!).

Getting to the Expo is provided on a bus, but give yourself extra time to fight crowds and shop. I didn’t get to shop at the Princess expo since the venue was tiny and even getting official race swag meant a 45 minute line, and that was after waiting 30 minutes to get our shirts and packets in a different line.  When you run the Princess, just know you’ll have some lines, some waiting, lots of crowds but of course- it’s done in Disney style and you’ll have plenty of great pictures, first aid & water stops and a gorgeous medal!

Remember, even if you didn’t perform at your best, you still gave it your best.

No matter how good or bad you do, you still get that bling, so celebrate your journey!

I want to take a second to thank all of you who supported me in this journey, Runners Booty for making me look fabulous and especially to ImpulseSave who supported me as an official partner on this race.  I’ve used ImpulseSave to save up for this race (and my first marathon later this year!) and loved having them as a partner to share my story.

PREVIOUS POST
"Are You A Giveaway Maven (Or Do You Want To Be?) Call For Team Members!"
NEXT POST
"I’m Hittin’ The Road to Chicago In 20 Days… Let’s Have Some Fun!"
13 comments so far.

13 responses to “Princess Half Marathon Recap”