Rehab For Couch Potatoes: What I’ve Learned From Running (Part 1) 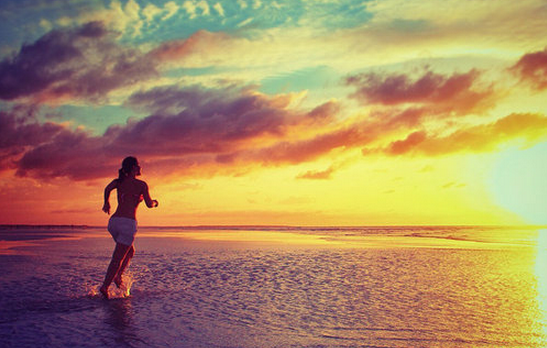 Last week, I detailed my history with physical activity and it wasn’t a good one.  For years, I have been left with the impression that running sucks and I don’t want to do it, without ever examining those feelings.  Beyond shaking an angry fist at the U.S. school system (and my parents to some point) who left me hating my curvy (a.k.a. jiggly) body for the shame felt running in front of jocks,  I’ve decided to cast that aside and take the reigns of my health- no blame.

Turns out, I love running- I hate gyms (at least for now.)  I totally and completely suck at it and I’m sure a panda could lap me on the field- but I don’t care.

1.  Not All Activities Are The Same

If you’re a couch potato looking to reform like I am- know that you have to re-examine your previous impressions of certain activities.  My ideas about running were based on my memories of P.E. class in grade school- but I failed to realize that as an adult, running could be totally different.  It’s amazing how having the right clothes and being away from adolescent boys changes things.  Chances are, if you feel you’re not cut out to get active, you may be basing your assumption on a bad experience that’s not even relevant anymore.

As I’ve gotten older, I’ve tried a few things and failed at making them stick- but it’s all about finding that one thing that makes you tick.  I love yoga, get bored with a treadmill (unless the tv show on is friggin’ awesome), I hate weight lifting.  Going to a gym doesn’t appeal to me, but I love the spontaneity of running in the city.  Give yourself time to find what excites you- and as a reforming couch potato, you have to be really excited to sustain a habit change.

2.  It’s Tempting To Buy Expensive Equipment Before You Start, Don’t.

When I started running, I did have to go out and buy a proper sports bra, shorts, top & socks.  The only clothes I had were not to be seen in public or comfortable for running- so I did have to make an initial investment, but promised myself it would not go to waste.  After I run consistently for 3 months, I will reward myself with a fancy pair of kicks- until then, work with what you’ve got.

It’s tempting to shop to feel like you’re ready-  but no amount of wardrobing will motivate you.  Walking to the sports section of the store or perusing fancy equipment for hours online seems legit, but it’s a stalling tactic.  Buy only what you need to get started and get your butt out the door!

As a frugal girl, spending $170 on clothes that I didn’t want to waste was enough to motivate me- but that might not be the case for you.  If you want to add to your equipment/wardrobe as a rewards system for forming good habits, go for it!

3.  Nobody Really Gives A Crap That You’re Slow, Chubby or Totally Sweaty (but you.)

For years, I used the excuse that going to the gym or running the neighborhood would be akin to the walk of shame.  In my mind, there were eyes everywhere judging my performance, laughing at my inability to keep up with the other invisible people in my head.

Sure, it feels weird to see people lapping you on the track or someone outperforming you in the gym-  if they’re judging you silently, they’re assholes, but chances are they’re counting reps in their head or fighting the inner critics in their own mind rather than looking at you.

Learn into the fact that your own mind is the biggest critic that is keeping you from giving it a try.  Nobody else pays attention the way you think they do.  If someone on the street sees you huffing and puffing trying to get through a block of jogging, even if you look like a sweaty elephant- they most likely are judging their own performance, not yours.

4.  In Your First Few Weeks- You Will Need To Eat Healthy For Energy But Indulge In Calories.

If I eat a crappy meal and drink wine the night before, it’s harder for me to get up to run- so I found that I had to instantly shift my mindset about my evening meals & mid-day snacks.  In that respect, in my first week of running I already saw a huge bout of progress in my nutrition.  All of a sudden, eating became intentional and what I ate not only had long term  effect on my health- but short term impact on my performance hours later.  That’s bueno.

On the other hand, when you first start a new physical activity after years of couch potatoery- every time you work out your body will have to adjust to the output of energy and you will crave food, bad food- and lots of it.  Not only is this change in habit challenging your physical state but your mental state as well.  Don’t treat yourself like a slave,  indulge a bit…even if you wipe out your progress with ice cream, I say, do it… you want to rebuild connections in your brain that associate good habits with rewards.

A few nights after I worked out, I’d take a big swig of water, eat some almonds and then have a Corona Light or a fudgescicle before hitting the shower-  is it the smartest way to get in shape? Probably not. Is it a treat that keeps me motivated? That’s what matters.

I want to hear what you think-  what do you do to keep active?

What motivates you to do something new?

How to Find Motivation For Winter Workouts

How To Save Money On Running Shoes,…

Frugal How To: Smoothie Recipe For Healthy…

11 responses to “Rehab For Couch Potatoes: What I’ve Learned From Running (Part 1)”