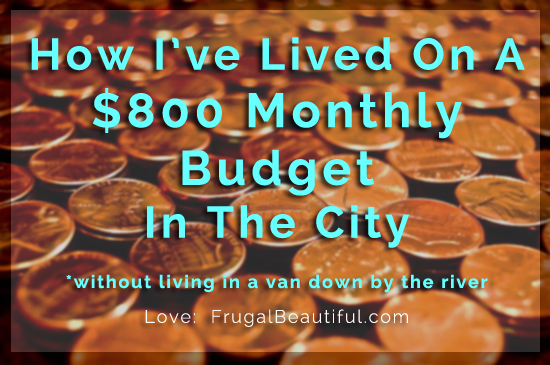 Before I begin talking about my two years as an uber-broke grad student and tell you my secrets, I want to first say- for you diehard frugal folk, I’m not expecting this to be ground breaking stuff, I know you’ve heard this before or do it yourself.  My point in telling this is not to wow you with new frugal hacks, but illuminate what’s possible- especially if you’re holding back on a dream because you’re “too broke.”

Secondly, I want to say that while frugality did help me live on $800 of income a month, luck and savings were necessary to get me through, I’m not perfect and life doesn’t listen to budgets.  There were months where my emergency fund (that I had saved by working all through undergrad & during summers) was necessary to cover all of my bills. I wish I could say I was perfect each and every month- but I had months where I failed- this is why I’m a huge proponent of saving while you can to build an emergency fund.

Finally, while I did take out student loans (only to cover sky-high tuition) my goal was to stay consumer debt free and not take out any extra loans or credit cards to pay for food, fun or rent.  Of course, my situation and thus, my tactics, are not applicable to everyone, nor would I expect them to be.  I was a single lady with only one fur-baby (a rescue pug) who lived in a  a major city with public transit.  Obviously, it won’t work for everyone (heck it no longer works for me as I live in a small town now) but perhaps some of these tips would be helpful for you!

One of the biggest drains on a very small budget is when we tell ourselves what we “need” to have without realizing the accumulating costs.  Some of my friends ended up with $10k in consumer debt after graduating because they “needed” their own space-  so they also “needed” to completely furnish that space.

I had two roomies, no door to my bedroom (a curtain, y’all!), no dishwasher & I had to use a laundromat a few blocks over.  I did though, get to live within walking distance of campus for about $350 a month with utilities.  Yes, $350 a month total. My two years in Chicago was not glamorous but I was able to graduate without credit card debt and heck, with a few hilarious stories.

Would I recommend everyone strip down to perkless living?  Well, if you have to, you have to. Most of the time, especially if you’re young and studying, you can live off less than you think.  One of the easiest cutbacks is simply to find a cheaper apartment, or share one with roomies even for just a year.

At the time I lived in Chicago as a grad student, I asked to use my student discount everywhere I went. Before I bought anything locally or before I made a big-ticket purchase on tech gadgets or contracts, I checked to see if I could get a discount. Doing so got me discounted entertainment tickets, car insurance, a discount on my cellphone bill and my MacBook Pro (ahem, not in my $800 a month budget, thanks!) was much cheaper!

Additionally, there were several instances where my university attempted to charge me for things I didn’t use or need- like access to the health center. I contested this with the Bursar’s office and saved nearly $1000 a year since I was still covered (sort of) by my stepfather.  Several times, I had to call my phone provider and ask why my student discount mysteriously disappeared or what the extra data charge was.  Additionally, there were times when I was nearly nickled and dimed to death by city living-  truth be told, sometimes you have to sit out the cocktail hours and overpriced cab rides.  Does it suck sometimes? You betcha. Was it worth it?  You got it.

There is a lot of pressure to own things and to buy them ourselves in the emotional high of an impulse buy or lure you in with the idea that you’re still getting an awesome deal.  Living on $800 of income a month my job brought in was tough, I couldn’t even buy second hand some months!

I know it’s been said- but libraries are a godsend!  I used the library to get all my DVDs, CDs and almost all the books I needed for classes, business research or fund my curiosity about frugality and personal finance.  Not only did I shave $400 off of expenses each semester, but free books for business meant I could eventually learn tactics for a side hustle (more income!)

It is more important than ever to stoke your curiosity & learn new skills – best of all if you can do it for free.  In addition to books and DVD’s to entertain and explore, I also got by through borrowing    major items or being resourceful when things weren’t needed- I ended up with a free bicycle, appliances for my apartment when friends moved away & winter items without having to buy. Yes, you have to get crafty and a bit lucky… do your best!

Everything you’ll ever want or need costs either money or time to acquire.  For example, even extreme couponers, though saving a ton of money, report that saving money is their part to full time job.  I eventually sold my car to take public transportation, and while it saved me a lot of money, it often took a long time to get from place to place.  If you take shortcuts on meal planning and opt for restaurants or Lean Cuisines to save time- it will cost you money though you save time.  I learned this early on and often struggled to put it to practice as a busy grad student- but I would try.

To save money and time I would batch recipes and try and make big portions to freeze or feast on throughout the week.   Additionally, at the apartment we didn’t have cable and opted instead to watch movies online for free, from the library, and eventually I got Netflix since at $10 a month it was still cheaper than cable.  Of course, being creative and frugal with entertainment isn’t as convenient as automatically paying for cable, but it saved us money!

Additionally, on the topic of either paying for convenience- I admit it’s not as easy to track down free yoga classes, open houses for businesses or other free events, but you get better as time goes on!  I had the Cheap Bastard’s Guide to Chicago and read tons of frugality books to learn to scope out free opps and clever ways to get items and services I needed for less- like visiting beauty schools instead of salons (took longer to get a hair cut, but that harkens back to the point)

$800 doesn’t cover much- even when you work as many hours as you can to put together some extra chump change to have fun with. When I wanted to adopt a pug and donate extra as a “thank you” for the volunteers at the dog rescue, I did a fundraiser online and people pitched in to raise an additional $700.  Additionally, to cover the  adoption fees I paid myself, I sold some DVD’s and took up any quick money makers I could through quick side hustles like blogging, trouble shooting websites & selling makeup…yup, I sold makeup for a time to pay the bills!

As mentioned, I cut expenses by selling my car, cutting back unnecessary bills (like cable) and got creative with my side hustles.  Without cutting expenses (and yes, perks) plus the extra cash to cover holidays and illness- I would have really struggled.

I made the early mistake of treating my frugality as a punishment. Yes, times were tight, but my perspective was all wrong.  I wasn’t in financial prison by tightening my belt- I was attempting to stay away from the jail that is consumer debt.  To stay sane and not become resentful of some of my “loan loving” friends, I rewarded myself for sticking to a budget by picking out the great thing I was going to do or buy at the end of the month- or I would give myself any extra side hustle money to hit up a sale.

My biggest advice to anyone who is attempting to cut their spending is this:  you are not budgeting to punish yourself, you’re freeing yourself.  Just like those of us that work out to lose weight and get healthy, sometimes it hurts to cut back on the treats, but the goal, no matter what it is, feels more important.

Make your goals the epicenter of your saving and spending- create a goal board or write post its to remind yourself of the “why.”   If you’re living frugally to avoid going into debt or pay it down, take time each month to celebrate your hard work- even if it’s just over a cheap bottle of something strong!  (wink!)  Take time to remind yourself what frugality and budgeting enables you to do, not what it prevents you from doing.   Honestly, without goals, I would have given up and totally fallen off the wagon.  Even if my goal was just to save enough for a pedicure or earn an extra $100 by taking up an odd job- it got me through the tough months. 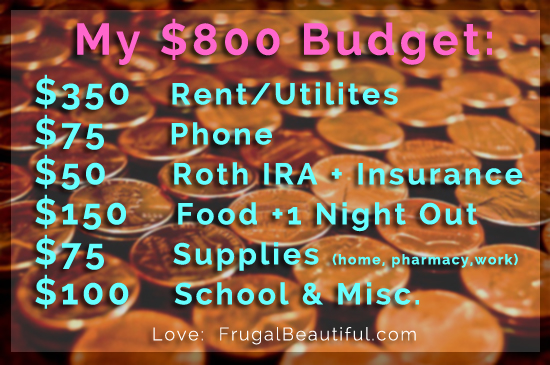 The “School & Misc” accounted for social events, birthdays or necessary items I couldn’t account for ahead of time (like a new umbrella when mine broke or a book I absolutely had to buy for a research paper)

One thing I wish I had been better at was couponing.  While I saved money by cooking at home, I know I could have done better by looking for deals- though typically both my time and storage space was severely limited.  “Extreme couponing” wasn’t an option without a car and in a shared kitchen with 3 people.

Were there months I went over budget? Oh yes.  I admit I wasn’t always staunchly frugal and would succomb to a “let’s celebrate surviving midterms” beer & pizza night that wasn’t in my grocery budget or I wouldn’t plan ahead financially for an invitation to attend a school event.  I tried to stay as close to budget as I could- and while I was usually successful, I had a few dismal failures!

Have you ever had to live on an insanely tight budget?

How did you make it work?

Surviving The Holidays On A Budget

Frugal Living: Giving Back Is Part Of…

How Can You Budget For Things That…