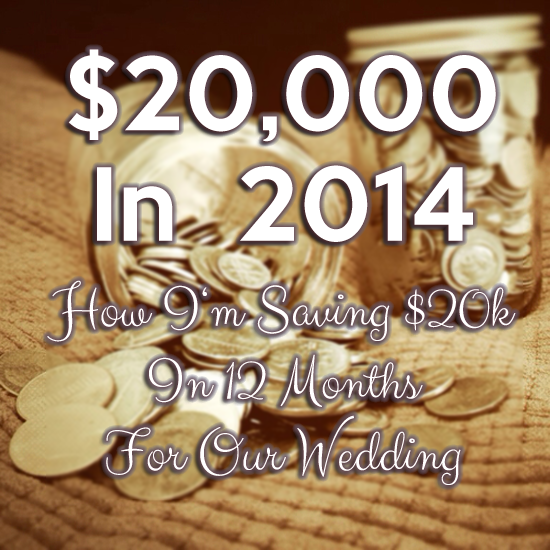 This year, I’m trying to save $20,000 in 2014 for a wedding, emergency fund and nearly max out my Roth IRA.  I started saving for the wedding in 2013 so since I was a bit ahead of that, I decided to save $20k in 2014 by adding on savings for my Roth and emergency fund.  It’s an exciting time, not just because I’m planning a wedding, but this is the first year I have regular income since I traded in my freelancing hat for a full time gig (doing the same thing but with one client instead of 3) and it’s nice to plan out my year and know that, with relative certainty, I can map out my financial goals.

That being said, since I have a regular paycheck and I’m working to save $20,000 of my income this year, it seems I’m more tempted than ever to spend it.  If you’ve read a personal finance blog or book recently, you know that lifestyle inflation is a real thing, so is that constant evil voice in your head that says “Oh c’mon, it’s only $40, you deserve it!”  Right now, I’m walking the line between realistically rewarding myself to prevent burnout and figuring out how much is too much and planning my “buy now” purchases with my “enjoy later” buys.

A key example of the buy now to enjoy later purchase would be the Dumbo Double Dare tickets we just bought at a whopping $680.00.  The race isn’t until September, but since tickets for the Disneyland Half and Dumbo Double Dare sell out within 24 hours, the option of waiting to save up for it wasn’t in the cards.  Sitting at the computer hitting refresh like a maniac, competitively trying to get into the website and spend your money felt like a crazed impulse buy, but we’d been planning on it for a few weeks.  (Mentally, not financially..we didn’t budget for that expense, blarg.)

It’s seems January & February were going to be expensive times with expenses I didn’t plan on.  Apparently, after Christmas, there was a black hole in my financial forecasting-  I had to pay for the second half of my new website,  then I’ll be hiring a CPA to do my taxes, Ralph needs his teeth cleaned (which could be $600+ Ugh),  and we may need to fly to California to look at wedding venues, because apparently, they book up really fast.

Booking a wedding venue has been one of the most depressing and frustrating experiences I’ve had recently, but more on that another day.

Due some extra expenses, I actually rescheduled my twice-monthly auto deposit to my Capital One 360 account and knew I’d fall a bit behind.  When I got my paycheck, I did a manual deposit to squeeze out what I could afford from my income that week.  Needless to say, it was a bit deflating to know I didn’t hit my goal and will have to figure out how to make it work with additional expenses I have this month.

We’re going to Disney World to run the Princess Half Marathon Glass Slipper Challenge (I bought tickets back in July of last year when I had a different job, wasn’t engaged and it was a “buy it or regret it” kind of situation that I had to act fast…now that I know tickets go on sale on a certain date and sell out just as quick, if I do any more runDisney races I’ll plan better!)  I have my costumes, Park Tickets (thank you future in-laws, you rock), and now we just need to pay for food and dog boarding.

Honestly, I’m spending money like I have it (ha!)… I’m hoping March will be a time to make up the difference since I’m a bit behind on my financial goals for the $20,000 in 2014 challenge- but as in theory and in life, you have to take into account that unlike the tools we use to save and calculate our financial goals, we’re not savings robots.  There will be mix ups, poor planning and honestly, the dire need to have fun when the winter blahs kick in.  I’m not above temptation, but I’m trying to delay gratification now for an awesome wedding!

If you’re saving this month, how’s it going?

What’s your biggest win or biggest lesson you learned in January?

How Can You Budget For Things That…