Warning:  This is going to be a really random post by me… I’ve had to prune it twice as I went on a serious venting about how annoyed I already am with election season and the “us vs. them” rhetoric that keeps everyone divided and nobody moving forward…that rant will be saved for another day.  For now, this is just something to get off my mind. 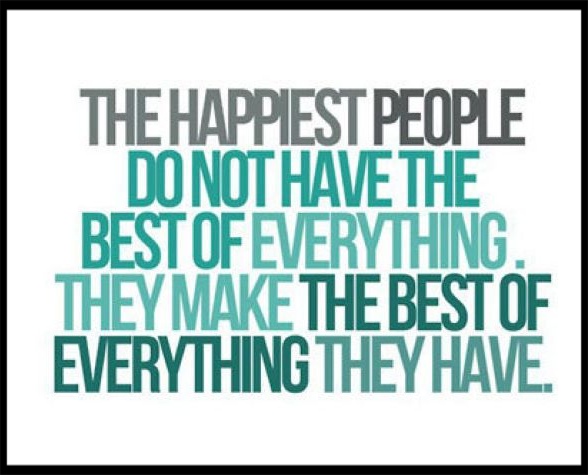 A few weeks ago, I saw a post by the Humans of New York on Facebook (which is a great storytelling Facebook Page which honestly, everyone should follow, even those of us who are totally NOT New Yorkers).  I was immediately struck by a  guy was talking about how cool it is that he can turn on the faucet and get clean drinking water, in both hot and cold.  I joke about #firstworldproblems all the time, but honestly, there are times that simply having clean water is a reason to be happy. 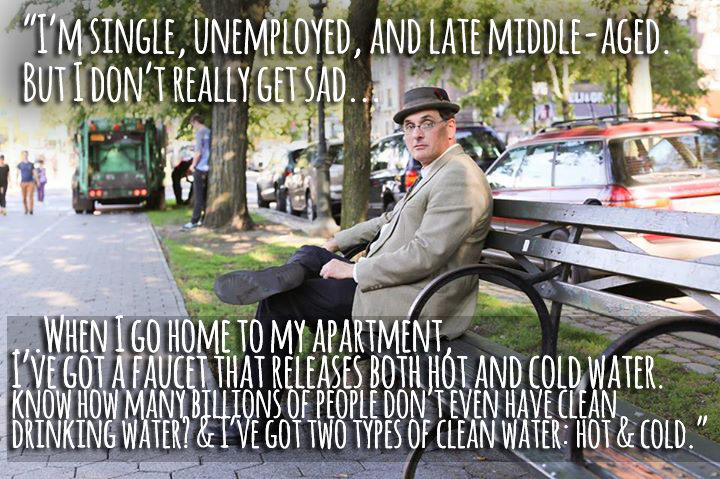 It struck me as so deeply true and sort of silly at the same time.  Literally, at the turn of a knob, he has things that billions of people in the world don’t have and we rarely appreciate it.  You know what? He’s right.  When my water even gets shut off for maintenance, it’s a huge pain.  I feel really lucky to be this spoiled.

Does it seem stupid to be amazed at something that we all have known as a necessity since birth?  That we can get giddy over something we feel entitled to, when so many people see clean drinking water as a far off dream- as a privilege, a blessing..but surely, for many, it’s not a right.  (thought it should be).

Every once in awhile, someone says something so simply profound, so humbling, that it checks you on your arse in the best of ways.  It just feels really good to feel grateful for basic things, when you have an epiphany about something you see and experience every day and never paid mind to.  It’s the basic things that are profound, and when you see how plentiful they are for some of us, it’s hard not to feel humbled and really lucky despite the other problems we face by comparison.

Patton Oswald is a standup comedian who has a bit about being really depressed in a grocery store.  While he’s standing in the frozen food aisle, sort of numb and dumbfounded, he hears Toto’s “Africa,” and he feels so..suburban.  He is suddenly struck with how depressed he is when there’s all this stuff around him…(which is typical dark Patton Oswald humor, where he takes pain and makes a laugh out of it). His pain is juxtaposed around all the awesomeness around him that it’s almost comical that two realities can exist in the exact same space, in the same person.

*Side note:  For this post, I’m separating temporary blues and sadness from clinical depression which takes more than just positive thinking & gratitude to address…now back to our story…

To illustrate the point- In front of him are literally, over a hundred choices of cereal.  Fifty choices of frozen dinners.  You can get chicken fresh and raw, frozen, cooked, preserved in a can, or baked to order.  You literally have thousands of food options, and the ability to get them.  It truly is astonishing that we have, as a country, rebounded from economic collapses, dust bowls, world wars, terrorist attacks and changing industry in a way that allows us the opportunity to give everyone a chance to have a slice of pie.

Don’t get me wrong, there are a lot of things wrong with this country. Just because we have said pie, and so many selections of it, we still have to work together to allow everyone access to the pie.  Though some fail to acknowledge it, we still live in the shadows of slavery and segregation, a legacy that still impacts the realities of people of color in 2015.  Women and are still paid less than men, and birth control, maternity leave and glass ceilings are still not on equal playing fields to support modern women.

The courageous men and women who serve our country in the armed forces come home to laughable, even insulting, aid for veterans.  Young people will be paying back student loans until their kids go to college and our parents generation probably lost a job, their retirement savings or a home, in the financial meltdown of the previous decade.  Yup, there are plenty of things that are totally, totally wrong.

We are constantly reminded in the digital age of how wrong things are.  In the right sidebar of your Facebook feed, you can see trending results of yet another politician, reality star or childhood hero that was discovered to be a real dickhead and it’s sometimes really crushing to try and be optimistic.

Despite all of this, I’m still in awe of what we’ve accomplished as a country, and what’s available to us just in terms of technology and cheap consumer goods.   When I get warm, I turn on the air conditioning or a fan.  Whether or not it’s in my budget to run it all day, I still can cool my home when I really need it.  I have a choice available to me now. I haven’t always, and many still don’t have it.  Having lived without it for several years, I am very grateful for this perk.  When I’m hungry, I walk to the store and literally have thousands of choices at my disposal.  I can buy with cash, credit, or debit.  No, money isn’t limitless, but I have some, or I can borrow some if I had to.  Access.

I have the ability to take out my own line of credit (which women couldn’t even do before 1973) to pretty much buy whatever I want, or, in a desperate pinch, I can at least keep the lights on.  I can vote if I think things suck.  I can go to college. I have, for most things, right to do so, and for others things,  at the very least, basic access.

Granted, I can’t always afford to buy whatever I want, and I grumble about the tax rate here in Chicago- but seriously, thousands of choices of what to buy and how to buy it.  When I need water, it is always there.  When I need lights, they are always powered.

I bring this up because a few years ago, I was working as an intern for an online commerce company- it was my first social media management job, and I was working 20+ hours a week for $600 a month on top of classes and another part time job.  I was scraping by and it sucked, tremendously hard.  Part of my job was to manage the team and address any glitches that came up- to which I referred to a team member in Pakistan.

I had to check my privilege when he would ping me, and apologize profusely- due to regularly scheduled rolling blackouts, he would be without power for 1-2 hours during our workday.  I kid you not. He apologized, to me. I’m #privileged and I felt it.  At the time, I didn’t even have air conditioning on our 4th floor apartment, but at least the electricity stayed on so I could duck my head in the freezer or turn on a fan when it was sweltering.  I will tell you guys, it’s HOT in Pakistan.

Yes, even getting to talk about this is privilege.  Feeling grateful and giving thanks has a tendency boil down inequality in America and many of it’s problems a bit too much.   The problems we face as a nation are extremely complex and no one person’s opinions or politics can solve them all- but let’s just sit in awe of one basic fact:

You and I have access that other people don’t have.  Until we fix that, we can start here, with gratitude that we have simple, access.

Access.  Healthcare is hotly debated in this country- but no matter who you are, if you are in crisis, you cannot be denied emergency care.  You will not die because you don’t have a health insurance card on you.  (You may drown in debt later, but you will not be denied assistance).  While there have been economic and social barriers that kept me from gaining access to any college I wanted to attend, I was still able to attend a university to obtain a degree beyond high school.

Life is sometimes really depressing- but no matter what problems lie in our budgets or our bank accounts, we still have so many blessings.  We get the privilege of getting to argue about, and then vote, to make our country better.  We have so many blessings- food, clean water, electricity, education, health care and public services to keep us alive and healthy.  People fought for theses privileges, and we have to continue working to ensure the “trickle downs” actually trickle down. 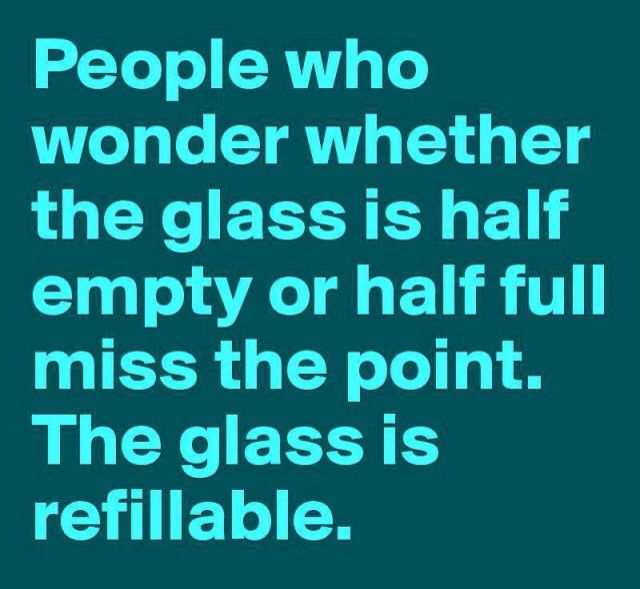 I’m neither an optimist, nor a pessimist.  I don’t see the glass as half full, nor half empty- I see it as refillable.

I’m privileged. I’m okay admitting that. I want this country to be better.  I think we can ALL do better- but man, I am grateful as all hell.  I have moments where I smile like an idiot because my thermostat can be tuned exactly the way I want it and there is a giant experience known as the internet that could answer all of my questions and entertain me for hours if I’m so inclined.  That’s awesome.

It’s taken me nearly 1375 words to say- you’re allowed to be miserable, entitled, annoyed, or feel left out and left behind- or you can choose to be grateful.  Sometimes, honestly, it’s just simply kickass to approach life with the amusement of a child again- to see how awesome health, electricity, technology, food, water, comfort and safety really are.

Honestly, we have a long way to go, but look at what we’ve got.

When You Just Need A Giant Reset…

PREVIOUS POST
"Celebrate Back To School With Kmart $25 & $100 Gift Card Giveaway! #BundleBrag #YouGotThis."
NEXT POST
"It Feels Like Home At The Lone Star Court in Austin, TX"
5 comments so far.

5 responses to “Recognizing Privilege In A World Of #FirstWorldProblems”