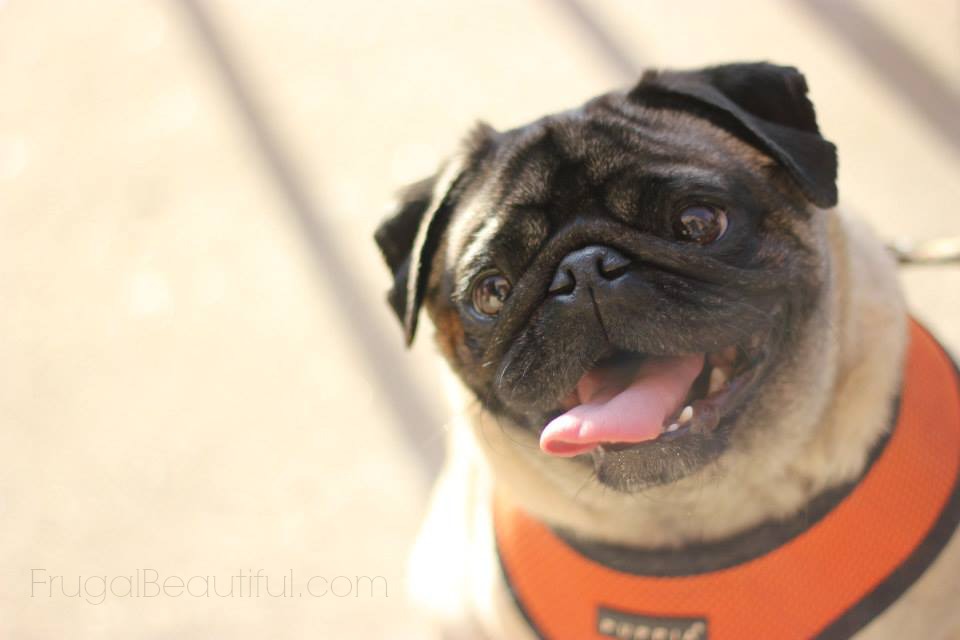 This is our pug Max, a rescue.

I’ve got a soft spot in my heart for pugs in need.  While I was in graduate school, I got involved with the Northern Illinois Pug Rescue and got to foster a sweet little pug named Ralph. He was an older dog, whose family had a baby and they didn’t want him anymore.  In May of this year, we lost Ralph to cancer, but were happy to also have adopted Max, our 6 year old little guy who keeps us company.

Of course, since Ralph’s passing, I’ve had a yearning to do more.  I’ve had a Ralph sized hole in my heart, and I let the pug rescue know that when the time was right and a pug needed a home who was a good fit, that we’d be ready to adopt again.  Pugs don’t always come to the rescue on a regular schedule, I knew that getting a pug could take months or even a year.  Little did I know that it would happen soon.

Last week, while browsing Facebook, I saw a post from the pug rescue.  10 pugs, all over age 10 had been given up by various families in the same week or so, all needed foster homes.

I was floored.  10 pugs all over 10 years old- many of which wouldn’t get adopted, but would still need a loving foster home to live out the rest of their days.  I called the pug rescue, and found out that some had been placed, but even more had come in needing homes- a total of 12 pugs would be processed by the rescue in under two weeks.  Some pugs came in pairs which are harder to adopt, some were older- two were 14 years old.

These pugs had been given up for a variety of reasons- financial hardships, bad behavior, or simply not being wanted anymore.

Honestly, it astounds me that so many people would give up pugs over age 10.  One pug, who we might be taking in, was given up due to the fact the family had a baby and the dog is marking in the house.  When an older dog starts to mark in the house, it usually means they have a physical or emotional reason for doing so, not because they’re a bad dog.  We had a problem with Max and Ralph marking in the house- we were working on correcting it and yes, it was stressful, but I cannot imagine giving them up.

I’m not here to judge.  I appreciate the families relinquishing the animals instead of simply abandoning them, but it breaks my heart.  On average, an animal costs $500-$1000 to get healthy, or more, if a dog isn’t up to date on shots, needs to be neutered or has a neglected condition.  When Ralph was my foster pug, the rescue reimbursed me for $800 in clearing up his ear and skin infections, getting his shots and tending to a bad tooth.

While it costs more to rehabilitate a pug, it costs $300 to adopt a pug.

Chris, my groom-to-be, is running his first marathon this October, the sold out Chicago Marathon.  While I won’t be running, I’m going to be his cheerleader and now, his fundraiser. 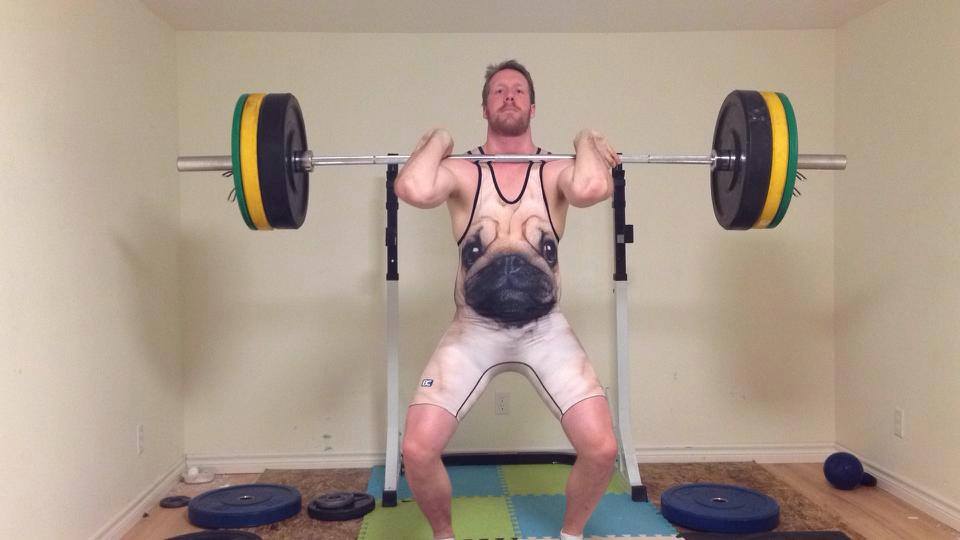 After a friend of ours discovered a hilarious pug singlet and things came together. Originally, our friends bought it for Chris as a joke, but we soon realized that something fun like this could lead to something greater.  We felt called to raise funds for pug rescue because it’s impacted our lives and is so desperately needed, we want to dedicate each mile of his marathon to saving one pug.

I’m excited and nervous for his first marathon.  I know he can do it. Let’s hope WE can do it- his running and my fundraising. Keeping up my end of the bargain, raising $7,860 is what’s making me antsy.  I haven’t raised this much money on my own before.  In 2012, I gave up my 26th birthday to raise $2,601, but this is nearly triple and it was quite a miracle to pull that off.

I’ve seen other bloggers, like my friend Dani, raise funds doing a virtual run to support their marathon fundraisers.  Chris is hoping that people will pledge money just so he’ll run in costume, but I know that a little extra something, maybe some bling, would get us to this big $7,000 goal.  I have no idea how to manage a virtual race but I know I’ve done a few myself to help other bloggers. 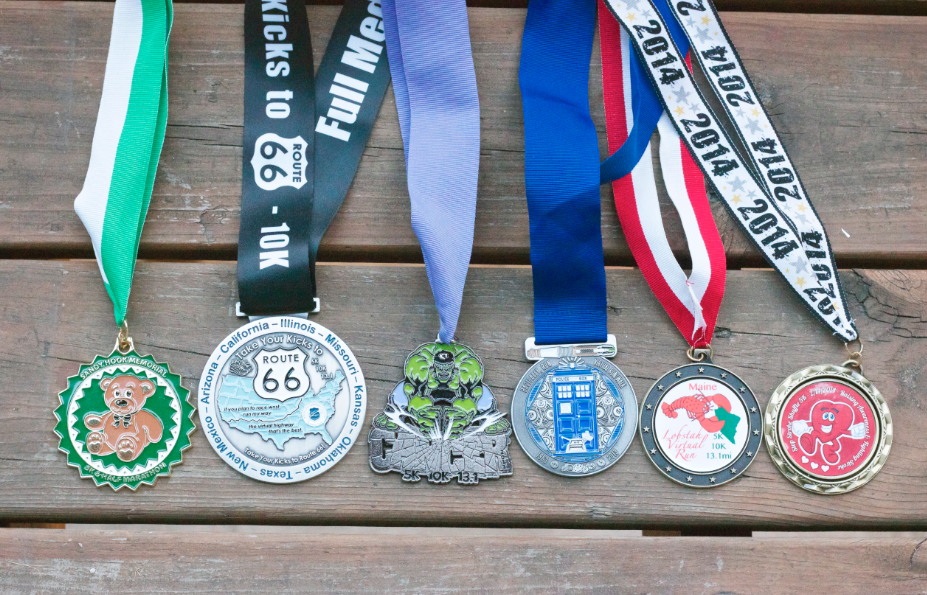 These are just a few of the medals I’ve run for with virtual runs to raise money for charity.  Each was about $25-$40. If we charged $35 per entry for the pug rescue, with medals, we’d need to sell 225 entries to hit our goal.

I’ve never done anything like this.  But honestly, I can’t think of a more fun way to raise money for a great cause, but also, as my groom and I plan our wedding and lives together, to embark on something like this to kick it all off.  We’re getting married next June, and this is going to be a challenge which will prepare us for married life- his running, my projects and working together to hit impossible goals as a team, while trying to utilize each other’s strengths.

So, now I need your wisdom- how would you approach this goal?  Have you creatively fundraised or seen it done?  Have you ever run a virtual run before?  I need advice on how to execute this and have reached out to some friends but could use some advice or links to check out.

I know that this is crazy, but maybe, crazy would work.  TOMS shoes did things differently and I’ve been inspired by new ways to get folks to participate in a good cause.  Would you get excited about running for a pug medal for $35?

I need ideas- how can we make this happen or am I totally out of my mind?

It Ain’t All Sunshine & Rainbows. Sometimes,…

PREVIOUS POST
"The Next Few Miles…Where I’m Running Next After Being Stranded In Savannah With Delta Air"
NEXT POST
"June GLOSSYBOX Review"
13 comments so far.