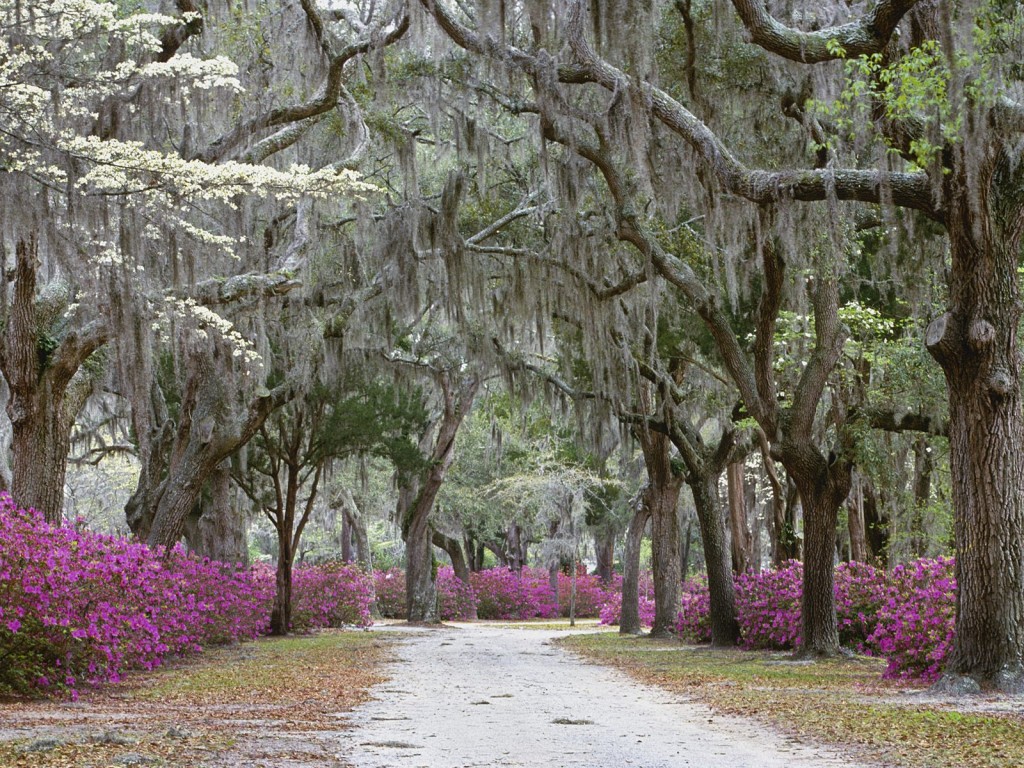 Greetings from Savannah, Georgia! I am writing you from the airport, after having a mechanical failure yesterday on the plane, extra overnight stay, and wouldn’t you know it- this flight got hit by a luggage cart or something, and now cannot fly.  As I write this, we may, or may not, be leaving at noon.  Because, apparently “investigations take hours,” and they don’t want to book me on another flight because apparently there aren’t any?  It’s too early for beer and now, it is Monday…so hopefully writing will soothe my nerves.  I’d already had problems flying out to Savannah, then, apparently now I’m having trouble getting home.

Aside from the flight drama in both directions, I absolutely adored Savannah.  I haven’t spent much time in the south, in fact, FitBloggin brought me to Georgia for the first time in my entire life, and, later, I’ll be attending FinCon in New Orleans, also, a first time for me!  It turns out, I absolutely love places that are on the water and I don’t mind the hot weather.

One reason I was able to adjust to cold, cold Chicago from coastal California was that I knew the water was close by.  Winter, of course, was totally awful, but I knew warmer days near the lake would be approaching soon.  Turns out, I’m not a huge fan of being landlocked.  Put me next to the body of water, it doesn’t matter how hot it is, and keep a drink in my hand, and I’ll be just fine.

Fitbloggin this year was just what I needed. Conferences serve different purposes for different folks at different times in their lives.  For me- this conference was essential to reconnect, share ideas and thank people.  Last year, I did more “bloggin” than “fit” and this year was different- I showed up in Savannah, ready to rock what I’d been working on in the past year.

In Portland for Fitbloggin 2013, I attended a ton of sessions, but you could. not. wake. me. for a workout.  This year, it was a mix of brainpower and physical stretching- plus plenty of rewarding moments with friends new and old.  Being able to see your former Fitbloggin roomie teach Insanity & sort of, kind of, keep up with her, is pretty darn awesome. Getting up to run with buddies you’ve kept in touch with since last year (Erica & Kat, you rock!) when previously, you would have hit the “snooze” button just feels like a new chapter for me.  Running in the humidity with two Floridians who do it naturally, was a challenge- but I met people along the way who I could keep up with. 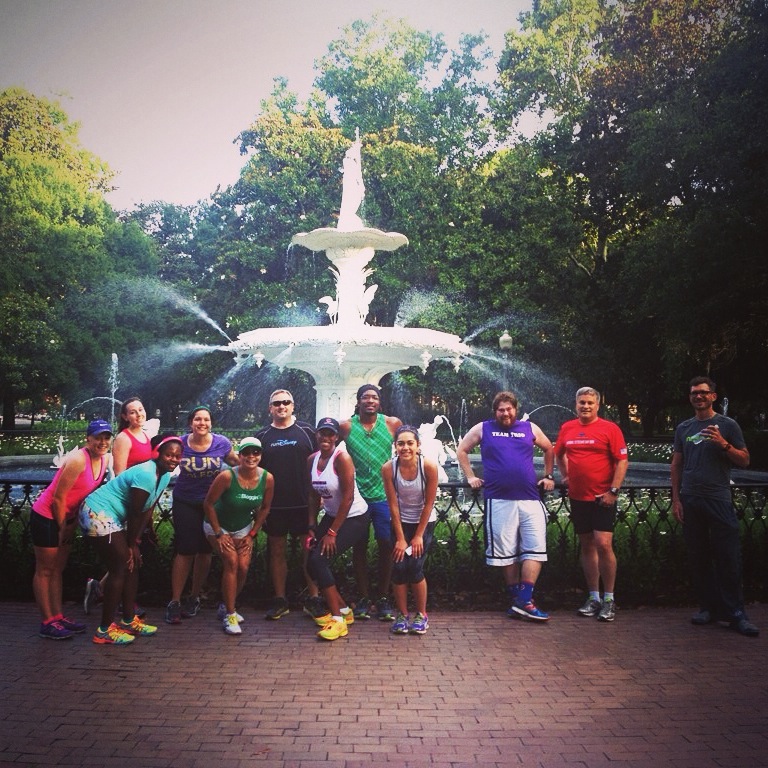 This year, I was honored to speak at the conference about what I’d learned as a blogger- how to bootstrap & DIY your way to success.  I had to build this blog on a really, really tight budget.  Along the way, I made a LOT of mistakes.

I learned one thing- we all start blogging on the same level playing field.  It doesn’t matter if you’re a neuroscientist or a boast 10 years in PR & marketing, most times, you start from the wobbly sea legs of blogging that we all possess.

I’d also like to say- do not rest on your laurels.

Some bloggers have been really successful simply because they were early adapters. They have been made successful from a lucky break.  Good for them, no need to piss on their success whatsoever- but, it’s also no reason to worship them. We are all just people, some though, hit their stride a bit earlier in the race, but we can’t know their journey just from a sideways glance.

I’ve noticed bloggers who had various levels of success who tout themselves as “experts” but couldn’t tell anyone how to do the same. That, in and of itself, is not expertise. It’s not craftsmanship.  If someone can’t lead you into the deep waters, don’t follow them in if they’ve never had to do more than doggy paddle.  They’ve been an expert swimmer in the shallow end- don’t fret.

I will say this- work hard. Challenge yourself constantly.  Find people to connect with. Give it time.  Your day will come.

This doesn’t matter if you’re working on a blogging goal, a fitness goal, finance goal or if you’re just on a quest for happiness- everyone has their own unique dues to pay and there aren’t any sexy shortcuts.  There are, of course, a few goldmines that people have struck it rich with, but don’t chase mirages.  Nobody can promise you that same gold, and if they are, chances are they have a PayPal account ready.  You have to strike it out on your own, but take friends with you- not gurus.

I speak at conferences about blogging, and I’m very humbled to do so.  I’ve coached and spoken with people in order to help them, not promise them anything or conversely, make myself look better.  I worked hard for where I’ve gotten so far, and it’s my goal to help others do the same. I don’t sell magic pills, and I can’t say that my way of working is a way of working for anyone else.

If anything, the success I’ve had with this blog has given me a servant’s heart.  People helped me along the way, and when I am around other bloggers, I want to help them, wholeheartedly.  If someone has an honest question, I give honest answers. I participate in the community that’s given me so much, in whatever way circumstances allow.  I’m happy.

I’m lucky, very, very lucky, that I have great friends and colleagues who have pushed me. I’m humbled, blessed and grateful. I emerged from the other side of a few storms to create a life I could sign off on, if tomorrow was my last check to cash.

I hope you know, if you’re reading this- I want to say thank you.

Blogging has changed my life, and I hope that this blog, in a very, very small way has impacted yours.  If you’d like to keep up with my adventures, I uploaded a few fun pics from Fitbloggin on Instagram and tagged all the amazing bloggers I could on there.  Since wifi sucks right now, please check it, since I want to give some link love, but wifi is not cooperating. Awesome bloggers, you know who you are. 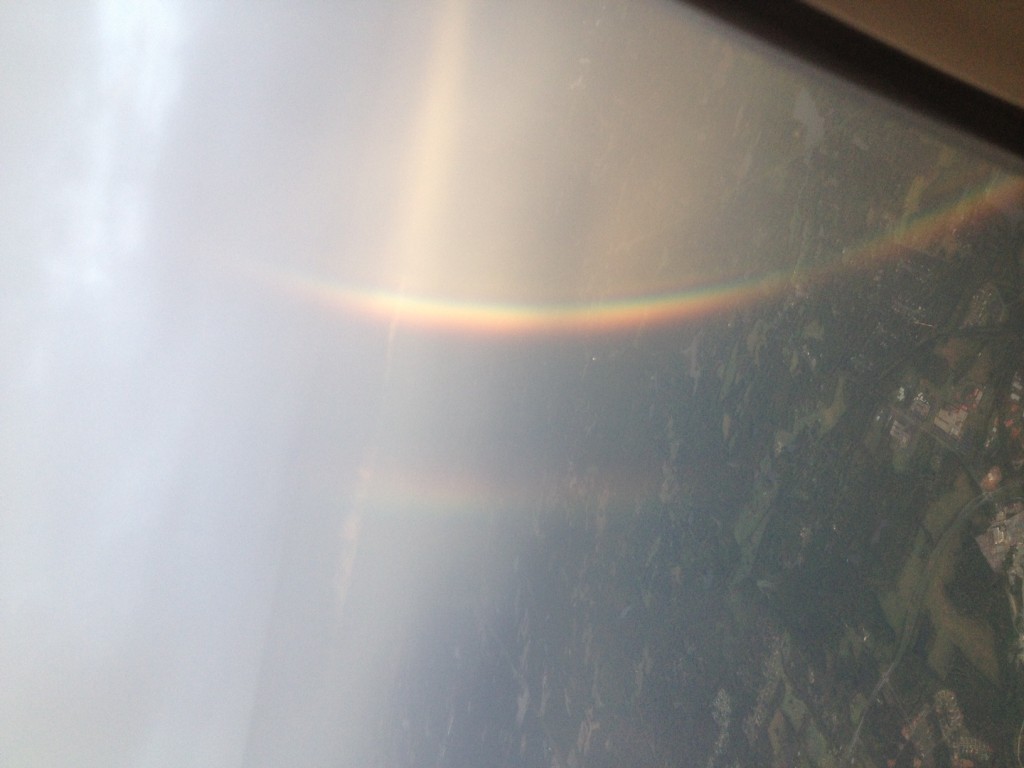 A rainbow from the plane en route to Savannah…how I would love to be in the air heading home right now…or seeing a pretty rainbow would help too.

Also- if you’ve had three flights with mechanical problems and spent a ton of money on airport food and missed an event plus a day of work- what are your options with that airline? Customer service at Delta have been very sweet, but honestly- three flights all with problems is a bit too much for me to handle, especially now with a missed day of work and spotty wifi & expensive food at these airports. They offered me a teeny travel voucher that won’t make up for an entire trip that’s been messed up in both directions and cost me a LOT of money to sit here for an extra 12 hours total with delays and cancellations, in addition to missed opportunities.

My overpriced coffee this morning was $6.10 this morning from Starbucks. I drank it but there’s nothing that makes me grumpier than have to subsist on three unplanned meals at an airport with pricey, gross food.

Advice for me in how to deal with Delta Airlines, would be really appreciated!

PREVIOUS POST
"Frugal Fashion: Workin Nerdy"
NEXT POST
"Pug Rescue, One Mile At A Time. We Want To Save 26.2."
26 comments so far.