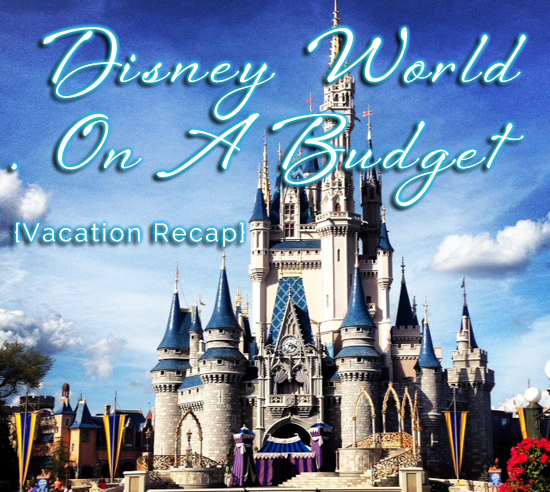 Visiting Walt Disney World for the first time, even a tight budget, was beyond my expectations.  My boyfriend and I attended the Princess Half Marathon, a runDisney event, and we got to spend a few extra days at the parks. I am finally blogging about this after plenty of procrastinating because I wasn’t ready to admit it’s over! Haha!

Talking about doing Disney World on a Budget always makes me laugh- even if you’re on a budget, it’s still by no means a budget-friendly trip, though you can be smart about it to make Disney work on a budget!  I had paid for our half marathon tickets, airline tickets & the hotel was taken care of before we left- so the $650 I had saved for the trip would have to cover all of our food, momentos, beer (yes, that’s an expense if you’re visiting Epcot!), and thank you gifts for 5 days.  Trust me, $650 is a lot of money, but over 5 days (and 1 full day of additional meals for travel), it adds up FAST.

Needless to say, we had a blast.  It was a belated Valentine’s Day for us, since the beau and I have been living with a few states apart for the past few months, he treated me to gorgeous roses in the room and a delightful mini cake during our dinner at the Crown & Rose in Epcot during the fireworks.  Those extras are not factored into the budget, but I must include them since the boyfriend deserves serious extra points for his romantic thoughtfulness and damnit, I was pretty excited about them (and I don’t want to know what they cost, I have a feeling they weren’t budget friendly but were totally savored!) 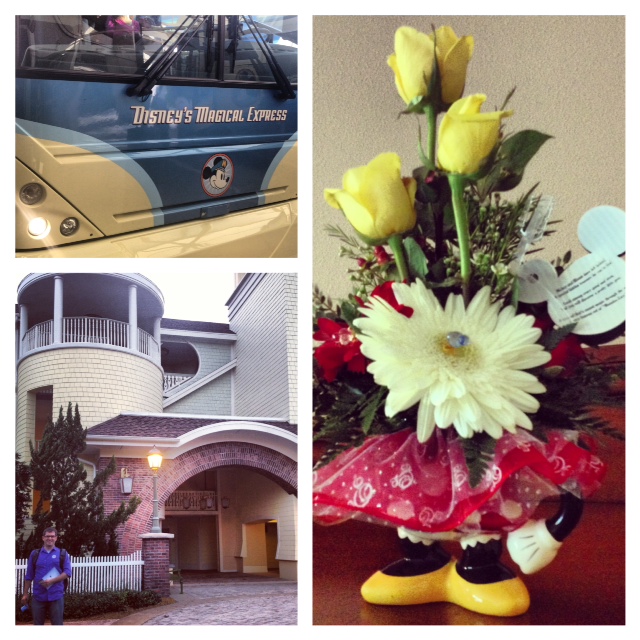 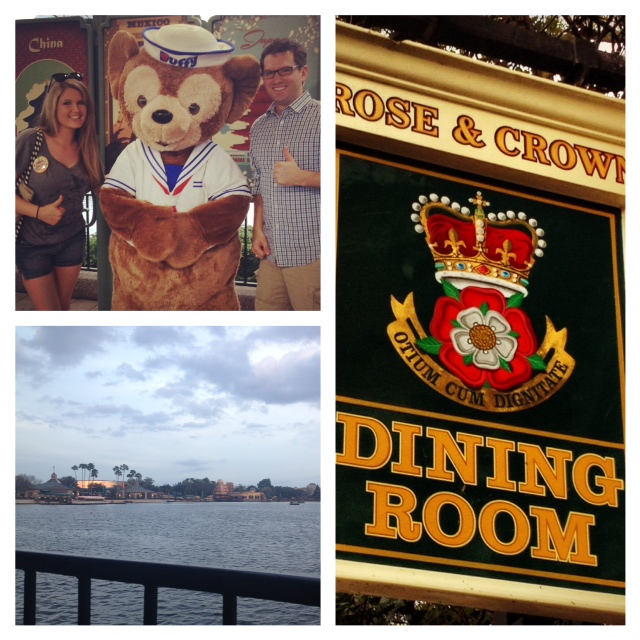 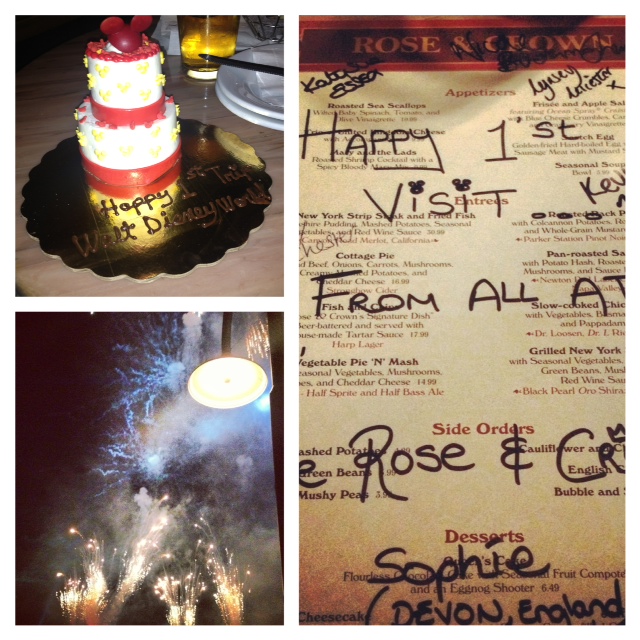 As much as I loved Animal & Magic Kingdoms, we had the most fun and spent the most money at Epcot.  If you are childless at Disney World, Epcot is the bees knees.  We spent an entire day “drinking around the world”  Yes, that’s a thing, and not something I just made up in order to day-drink….ahem… and enjoyed a delightful lunch at Coral Reef Restaurant with under the sea, tankside seating where we split an amazing ahi dish, then a dinner at the Crown & Rose (British fare) to watch the fireworks, try some scotch a

nd eat cake for the fireworks!  Doing the fancier of the meals for lunch was economically sound, and since we were there for lunch with a reservation, it was much easier to get a good spot right in front of the fish tank!

If you’re trying to do Walt Disney World on a budget- you have to decide how you will stick to your budget- whether you set a “daily budget” or an “overall trip budget.”  For us, we set an “overall budget” since we found we didn’t spend nearly as much money at the other parks as we did at Epcot.   You can set a daily food budget, but an overall budget for things like momentos and fun snacks- but that can get real complicated, real fast, especially if there’s sake involved (more on that later).   If you’re trying to stick to a budget, either check your credit statement when you get back to the hotel or take notes in your phone- Chris and I took turns paying for things, plus having a blast meant it was hard to think in numbers, but I found that while we were doing Disney World on a Budget, we didn’t have to be Scrooges to one another, but it wasn’t impossible to be mindful of our spending either, sake or not. 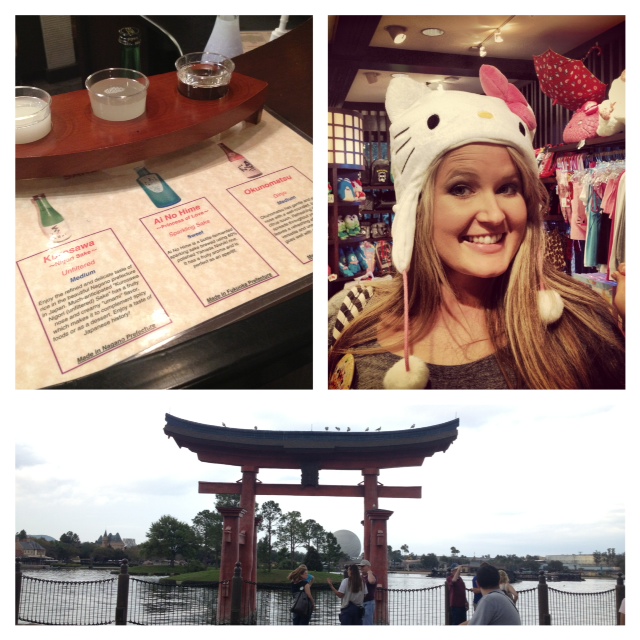 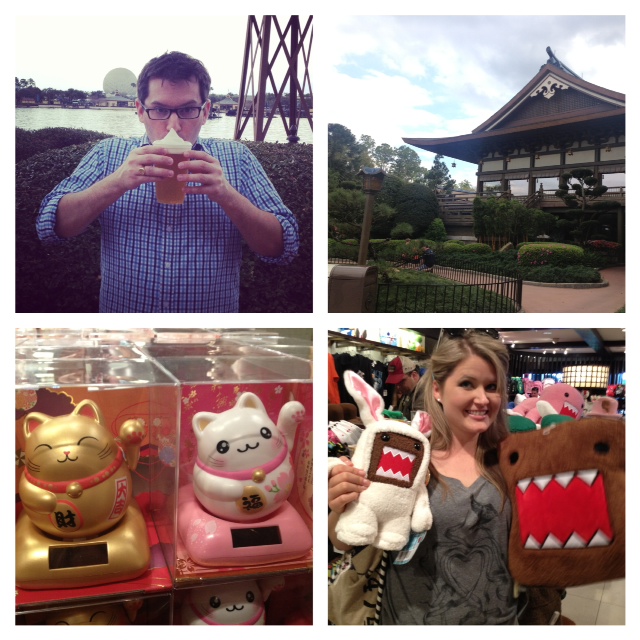 As stated, Epcot is one of my favorites, and the favorite of the favorites was totally Japan.  I love Japanese food, culture, booze & the fact that the gift shop in Japan is a virtual squee-fest with Domo, Hello Kitty, kawaii and I’m not sure if the sake had anything to do with it, but I ended up doing some shopping.  I didn’t end up with the Hello Kitty hat, but those Domos? You’ll be seeing those adorn the couch in our condo.  I used a Disney gift card that I’d been saving for 2 years to buy those bad boys.  Cheers!

We were fortunate that I had some gift cards to use up and some of our meals were provided for due to the various meetups and business stuff that was happening during the Princess Half Marathon weekend, so that saved us about $100 total. Not everyone gets that, but hey, I blog for a living- if someone says “you want to have lunch, it’s on me,” this girl doesn’t say no.  The great thing about the runDisney events is that lots of vendors and groups will have meetups and stuff, so if you spend your life in front of a computer screen, you can at least get some free cake out of it once or twice.  Frugality, my friends, takes all forms! 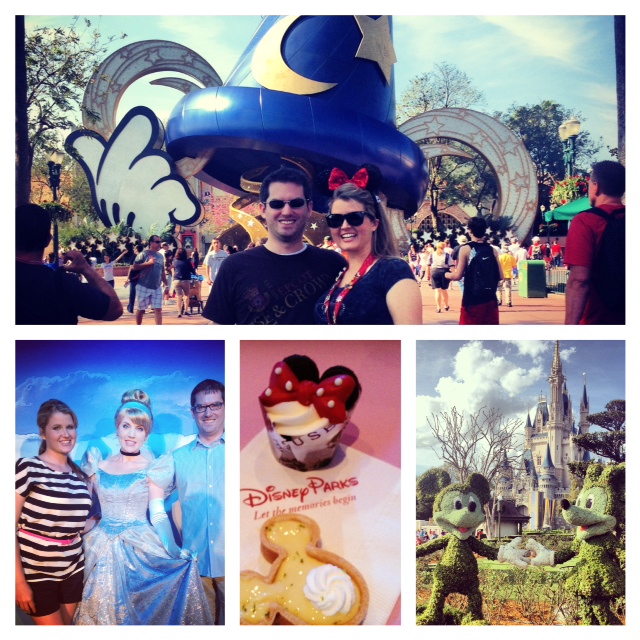 I had the most amazing time at Walt Disney World, budget or not.  I never once felt like we were being smothered by monetary constrains since we had tackled it bit by bit and I knew that I had the $650 waiting for me to pay off my spending at the parks.  I strive to live a debt free lifestyle, and I feel that while it took some serious saving to pay for this trip, I’m grateful for everyone that came together to make it happen.

Our families were supportive of our goals and helped out as much as possible with strategic planning, deal snagging and gift giving…. plus my boyfriend is a complete planning rockstar who added the special surprises that made this trip truly a dream come true. 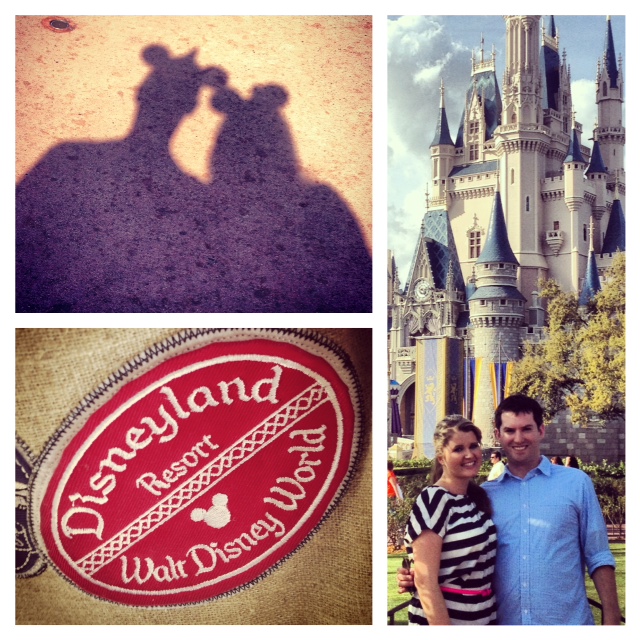 My Advice For Doing Disney World On A Budget:

– Set A Daily Or A Total Budget:  For us, one park and one day got the most of our spending (Epcot), and we cut costs the other days by eating breakfast in the room, bringing our own snacks & eating at the counter service instead of a sit down restaurant.  The hotels have free wifi so if you have to, take the 5 minutes needed to look over your bank/credit card to see if you’re on track.  Believe me, it’s easy to forget purchases  and credit swipes when you’re having fun!

– Set A Plan For Food:  I hate planning, but luckily the boyfriend is a master.  He called in reservations for the really nice restaurants for lunch, otherwise we ate at less expensive places for dinner (when prices are higher).  Make a list of the restaurants you really want to try and pick one or two that would make you giddy, and set your spending around that.

-Get The Darn Cup:  Boyfriend was giddy about this thing at the Disney World Resorts  where you buy their special resort reusable cup, and you can refill it at any resort for FREE. It’s  around $11 and you can fill it with coffee, iced tea, soda, whatever. At first, I was not happy with the $11 price tag- but after seeing that a bottle of soda or my morning cup of coffee costs $3 at the hotel, I had to give a nod to his genius.  For about $22 total, we must have filled it 8 times during the 4 days we had it,  each saving us at least $20+ a person.

-Bring Some Food:  We picked up peanut butter & cream cheese when we arrived, but brought bagels, oatmeal and fruit snacks with us- among other things.  Breakfast in the room saved us about $20 a day.

-Plan & Pay In Installments:  If you can help it, plan and pay far in advance.  First, I bought our half marathon tickets that were $170 each about six months in advance, then two months later, I bought my airline ticket.  The boyfriend planned the hotel the next month and allotted for that.  Then, in the 5 months leading up to February, I put money together each week to pay for the $650 or I needed to put aside to pay for everything else.

If you’re worried about the huge price tag, ask family members to contribute to the trip in lieu of gifts for birthdays or Christmas.  The half marathon ticket was my Christmas gift to Chris, and he got park tickets for my gift.  Sure, it meant we had to celebrate Christmas nearly 2 months later at the parks, but it was worth it!  Everything was paid for a piece at a time from the half marathon ticket, the park tickets, airline & spending money- but it came together piece by piece!

How To Save On Bachelorette Parties

How To Earn Money Hosting on Airbnb

PREVIOUS POST
"Cinderella Got A New Pair Of Shoes: Saucony Virrata Review"
NEXT POST
"Are You Sabotaging Your Financial Success? 7 Key Indicators"
8 comments so far.

8 responses to “Disney World On A Budget Vacation Recap”