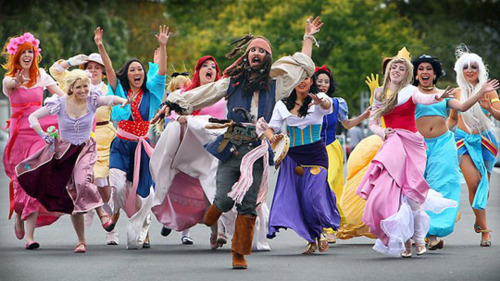 So. You’ve caught the runDisney bug like I have.  You’re already planning the Tinker Bell Half Marathon, The Princess Half Marathon or perhaps even the Wine and Dine at Disney World.  Whether you’re a seasoned runner or just starting like I was, you probably already have a spot reserved for the medal on your wall, and have started planning your attire for the big day to coordinate with your favorite Disney character.

The Tinker Bell Half Marathon at Disneyland in 2013 will be my first half marathon and I’ve also signed up for the Princess Half at Disney World a month later.  For training tips, please check out some of the amazing running blogs out there, but for tips on how to make sure you don’t miss out on the fun, be sure to check out this post!

Tips For Your First runDisney Half Marathon:

Running events at Disneyland and Disney World sell out really, really fast and I’ve read they are only getting bigger and more popular each year!  The Tinker Bell Half Marathon that takes place at Disneyland in January was sold out by July the year before. The 2013 Disneyland Half sold out in 48 hours.  Every run takes planning, but a runDisney event takes even more foresight and dedication to get a spot since they increase in popularity every year!

2.  If Tickets Sell Out, Run With A Charity.

The Tinker Bell Half Marathon was sold out by the time I went to sign up so I saw this as a golden opportunity to run with one of the great charities that teams up with Disney for these events.  Know that tickets might run a bit higher and that every charity has a minimum fundraising amount you absolutely must commit to-  if you can’t raise the funds, they will charge your credit card.

If you’re worried about fundraising, I assure you, the enthusiasm for runDisney half marathons is contagious- people have been really supportive of my training, fundraising and of course, anxious to know about my costume, so be sure to ask for donations! I’ve had a great time fundraising and the cause I chose is very special to me!

You’ll be able to snag discounts on park tickets and sometimes, hotel tickets, for runDisney races but know you’ll incur some unanticipated costs like costuming, race swag, new shoes, food and stuff you’ll shop for at the expo and that’s just for the race, not while you’re roaming the parks!

You’ll want to give yourself extra time before and after the race to rest- if you can schedule some time in to explore the parks afterwards, your body might thank you for it.  Running a race on tired muscles is a lot harder than waiting in park lines on tired muscles! Also, if you’re attending a runDisney race in Florida, know it will take a lot more time to get to and from the expo and race itself- it’ll take at least an hour to get back and forth on buses.

Finally, as with any Disney event- expect lines and crowds so don’t get frustrated.  Disney does an amazing job of putting together a race that accommodates 20,000+ people. Things are well organized, but know that if you’re attending a race at Walt Disney World, the races are a bit bigger, the lines are a bit longer and that means more crowds.  Take time to enjoy it, even with crowds and know that during the race you’ll have to stop and take pictures if you wish, but it takes time!

Also, see my post on How To Do Disney On A Budget if you want budgeting advice!

4.  Know You Can Amaze & Inspire Even As A Novice.

I’m not sure if it was the fact I was running my first half marathon or if my Disney addicted friends came out of the woodworks, but as soon as I started talking about the Tinker Bell Half & Princess Half Marathons and my trips to Disney, I started to get lots of emails and interest on Facebook from friends that wanted to get in shape or had questions about the races.

You may not be a perfect runner but expect that people will get inspired, excited and totally curious about what you’re going to experience as you train, plan your costume and get ready to head to “the happiest place on Earth.”  Additionally, know that from what I can tell runDisney is accommodating to a variety of experience levels and has a focus on fun, not necessarily being “the fastest or fittest” there.  If you are still new, you can do a Disney half marathon!

What advice do you have for new runDisney participants?

What has been your favorite race?

How To Actually Keep Your Resolutions This…

PREVIOUS POST
"(Slams Head On Desk) Planning A Cross Country Move On A Budget"
NEXT POST
"PopSugar Must Haves Review"
13 comments so far.

13 responses to “Preparing For Your First RunDisney Half Marathon”