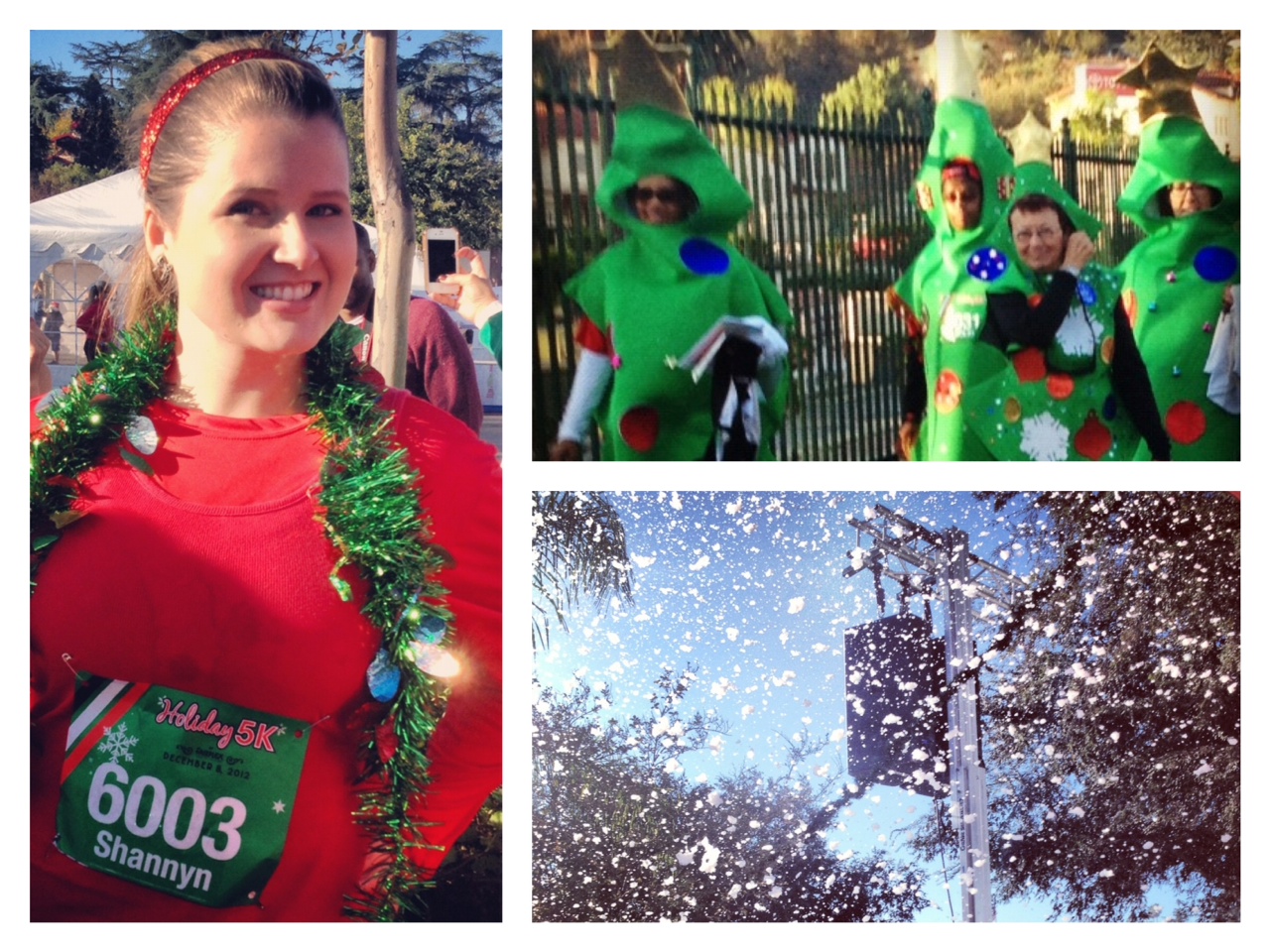 I’m not sure if you’ve ever run two 5ks in a weekend, but I can say, it’s pretty darn cool.  I got up early Saturday and drove up to Pomona for the Holiday Half Marathon‘s “warm up” 5k.  Though it was a warm, southern California day, they brought the holiday spirit to life with great swag, costume contest and “snow” that fell as the starting buzzer went off! 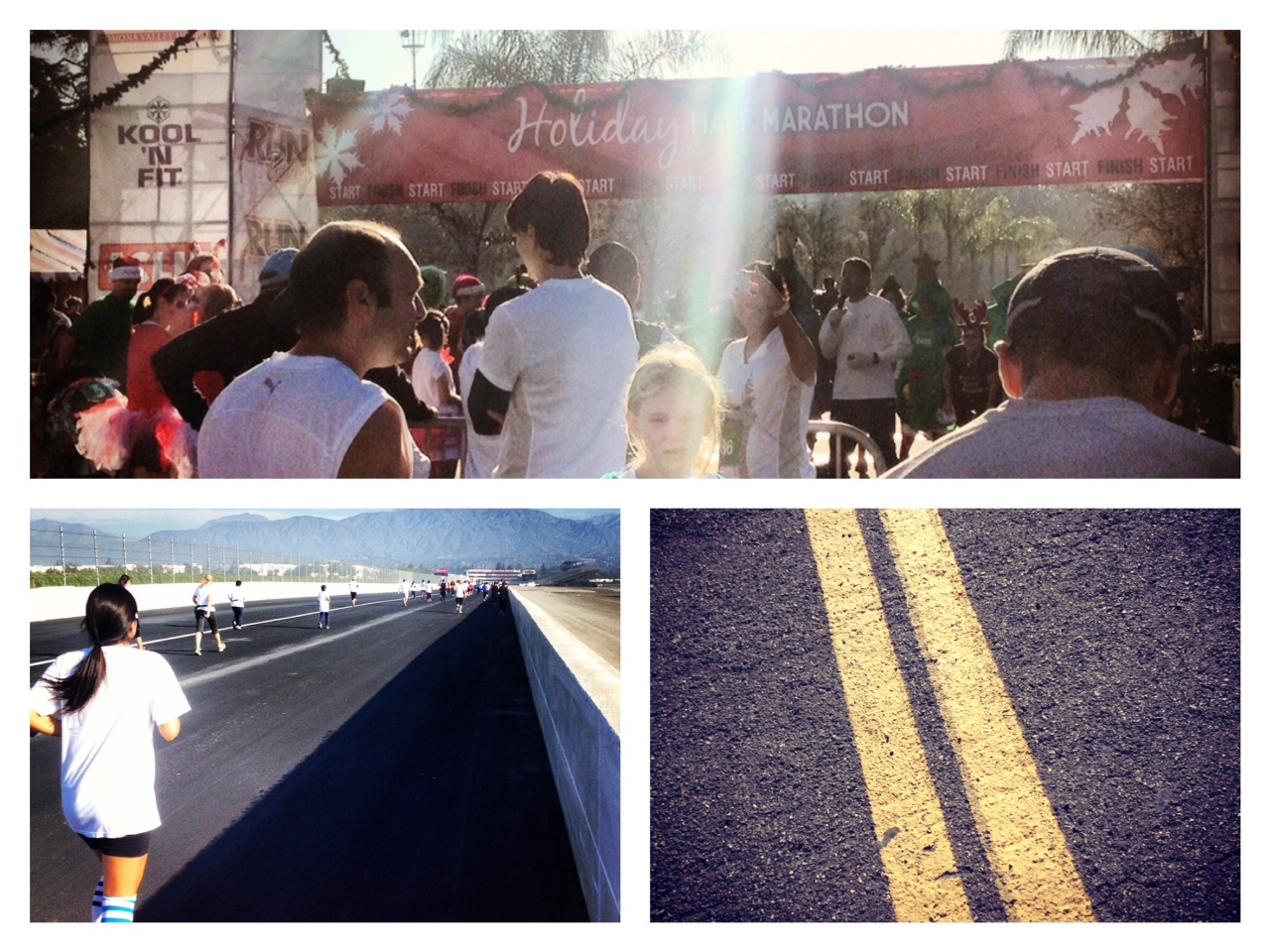 The race itself was 3 fun miles over a few brief hills, then onto the speedway.  With water stops after the first 1.5, the sun was shining and it was warm enough to take the tinsel off and enjoy the warm morning.  Well, I was enjoying the warm morning, that was, until a kind reminder that my stomach hated me and I had to do a lot of walking. Earlier that morning, I’d been hoping for a PR and took a new supplement (cardinal sin…and I knew this), some blood oxygen thing, with my breakfast.  I totally thought I could handle it, but apparently, my tum-tums cannot handle new things while running. 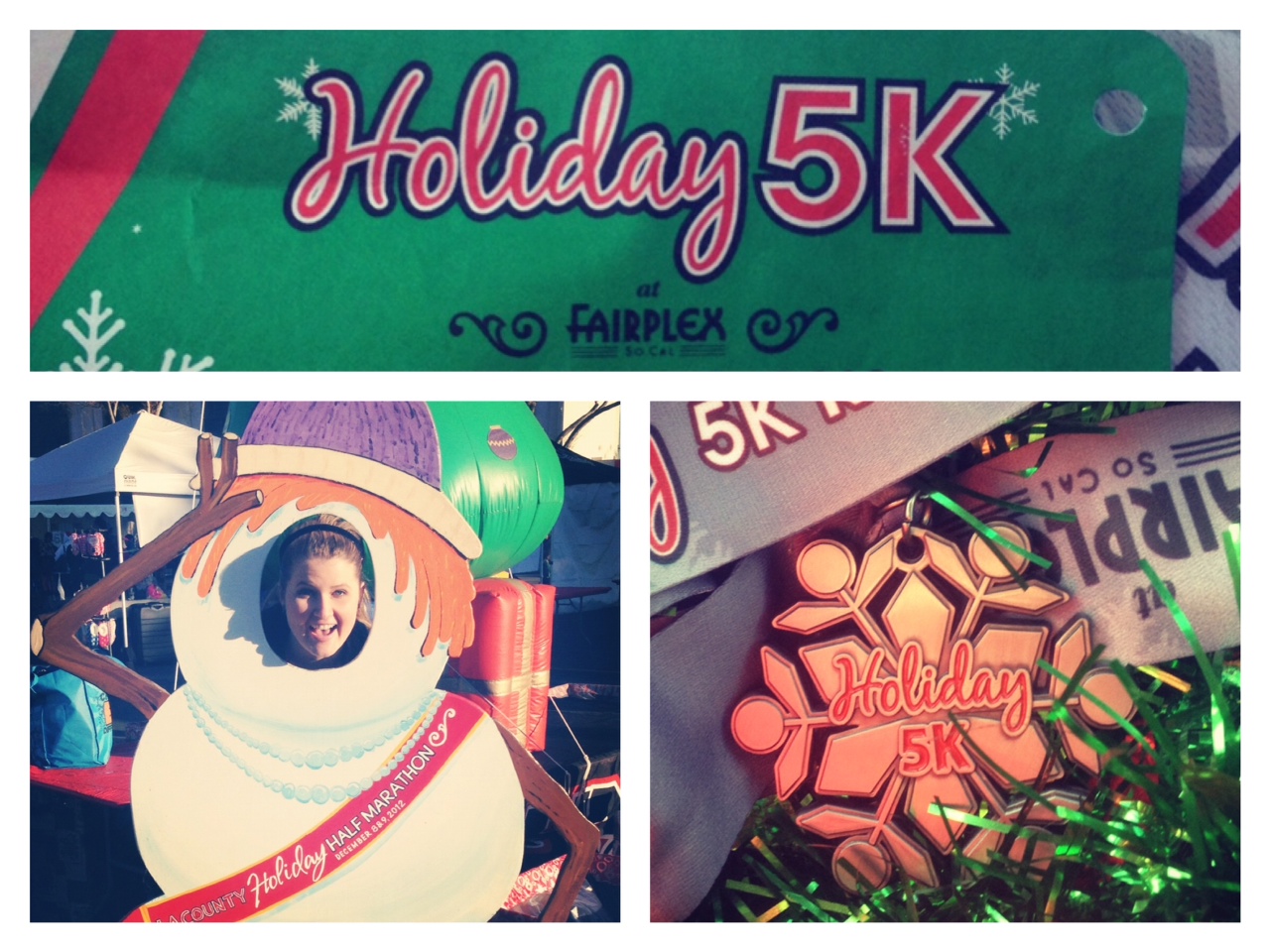 Luckily for me, the tummy Grinch didn’t ruin the Christmas run and I have learned from experience- no new supplements on race day. I finished the race with an average race time of 12 minutes and flipping loooveee my medal.  The swag bag was “virtual” with a bunch of online coupons and the tech shirt (which ran a little big) was super cute and high quality.   If I am in Pomona next year, I’d totally love to do the Holiday Half Marathon in 2013!

And now onto the San Diego Retro Run… 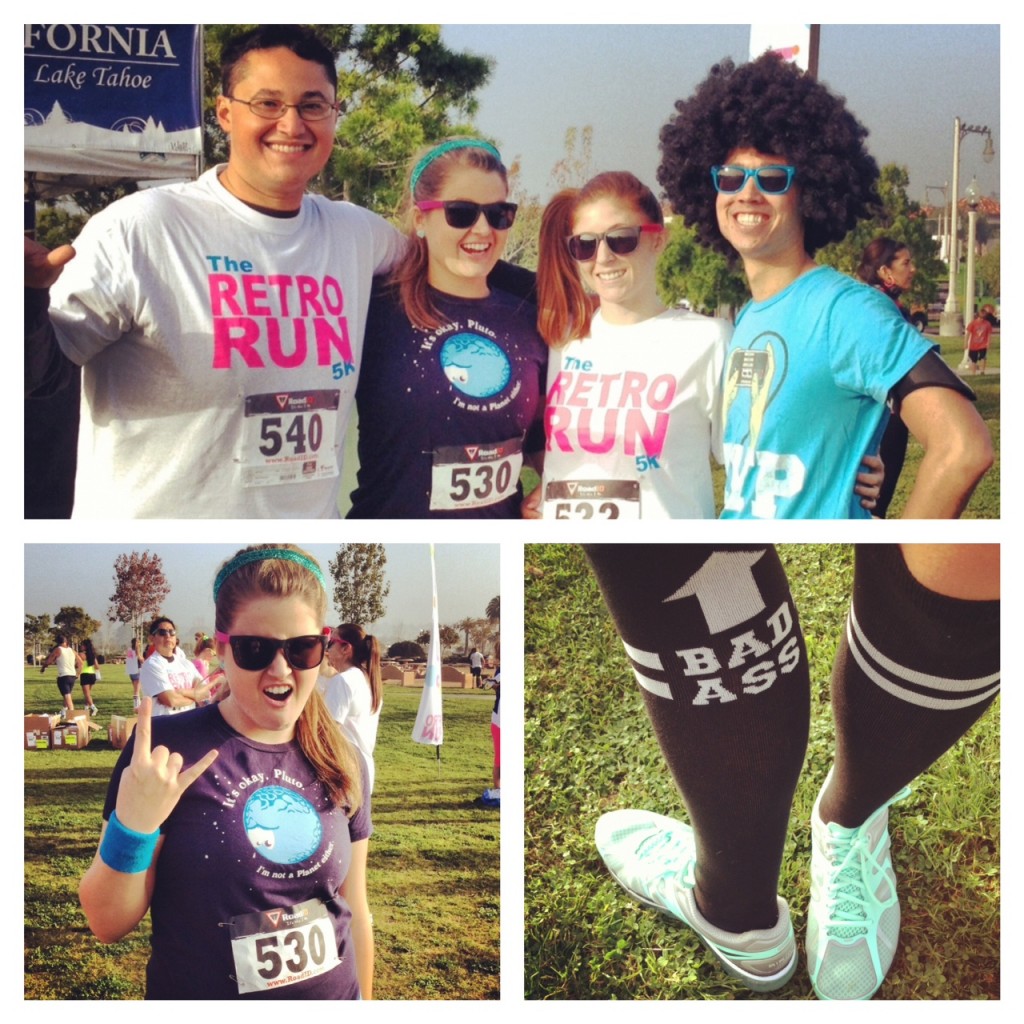 I snagged a ticket to the Retro Run through Living Social for half price at $22.  It was a lot of fun to get the miles in with some friends, but I have to say, the Retro Run was the most laid back race I’ve ever run.  You showed up, got in a big line and picked up your Retro Run cotton tee, bib and neon wayfarers, then hung out in a big mob amongst the vendors for hte race to start.

The 3 miles were ran in a big loop with very little marking off the terrain.  Since it was in a park and there were hundreds of people, it felt like we were trampling over plants and spilling over in the street just to run a decent pace and stay on course. 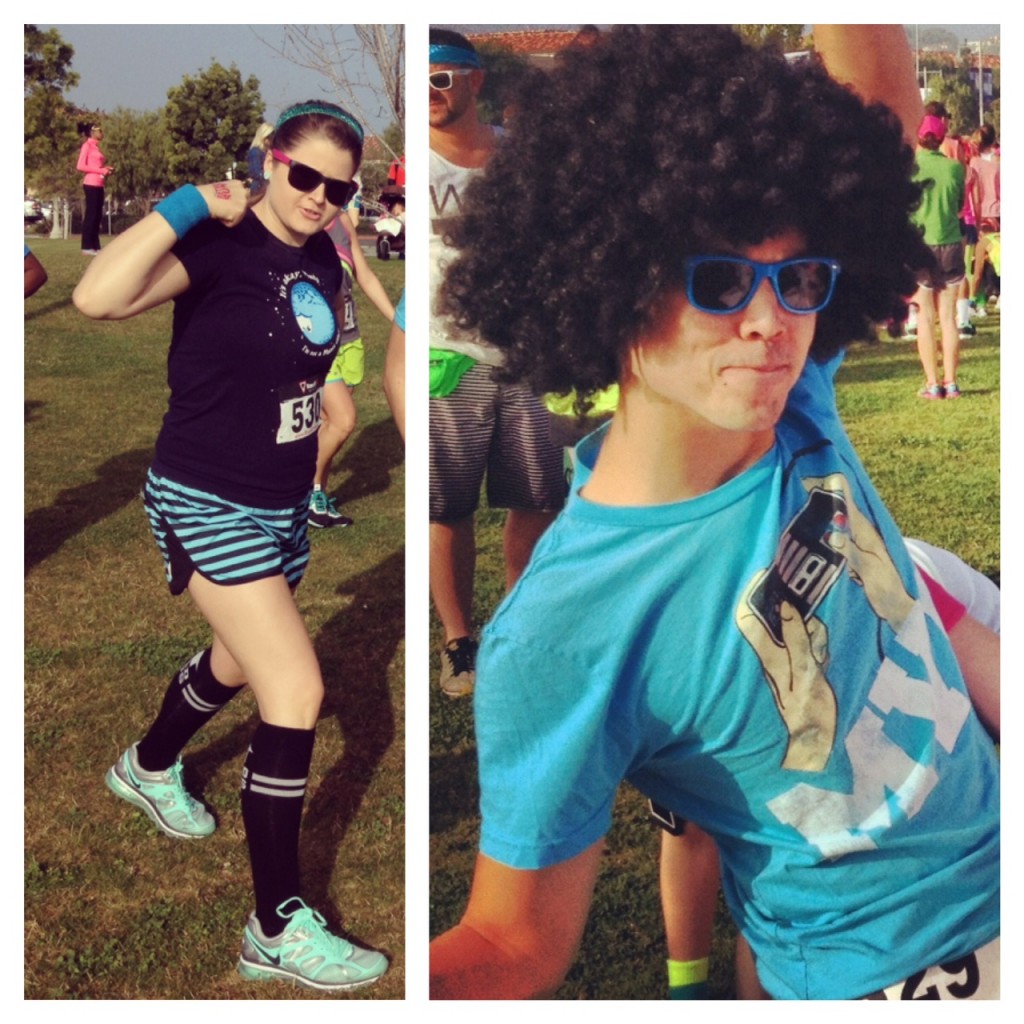 I think the Retro Run will get better as it’s more established, it seems like there were some kinks that needed to be worked out this year, or perhaps part of the craziness will the essence of the Retro Fun Run.  In addition to the chaotic and crowded racing conditions that didn’t really seem race appropriate, the site could have used some more information, though it worked out just fine in the end.  Oddly enough, the costume contest was done after the run ended which meant many of the fast runners had already left and the walkers were still finishing- kind of odd, but there were so many people in adorable neon outfits.

I saw some awesome furry leggings, amazing rainbow tutus and a Zumba running skirt I must have in purple and neon yellow…still trying to track down the adorable one I saw someone running in.  *sigh*  Every time I go to a race I seem to add even more running costume stuff to my wishlist.

Oh, and if you’re wondering… that’s me in a Pluto shirt… because it doesn’t get more retro than celebrating the good ol’ days when Pluto was still a planet.

What has been your favorite 5k or “fun run” from this year?

How to Prevent Injuries As A New…

Some Runners Will Never Be Fast- Words…

PREVIOUS POST
"Starbox by Starlooks Review"
NEXT POST
"How To Eat REALLY Healthy For Cheap When You’re Broke & Busy"
5 comments so far.