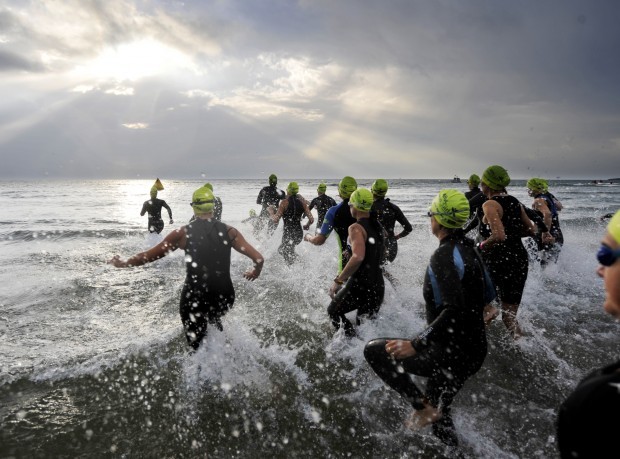 {in two months, this will be me…except with more flailing and far more wetsuit pudge}

Doing a triathlon freaks me out beyond belief, but I’m compelled to push the boundaries of my comfort zone in 2013.  I ran the Iron Girl 10k Del Mar and it was my second 10k ever, and a PR.  Overall it was a great experience- it was my first time running with exclusively women and I will never forget the comaraderie I felt that day- whenever I slowed down, another runner would nudge me to keep going.

Of course, that was a 10k, this is a triathlon sprint and while I’m excited, I’m totally nervous.  Running a 5k is no big deal (though I’m still a proud slow runner) but swimming 1/2 a mile and biking 12 miles is going to be a challenge…and the day after a half marathon. Yes. Insanity. I know. Oh and awkward transitions? I’m the queen of those…I can’t even put on skinny jeans without tumbling over myself, so there you have it!

I’m doing my first triathlon because something in me that I can’t quite put words to, is commanding I give this a try.  It’s not that I’m an adrenaline junkie or I’m locked on the next achievement-  as much as I’d like to brag about my 6 half marathons this year as a reformed couch potato- I don’t feel like I can brag.  I still run 11-12 minute miles. I still have bad days. I still run at the back of the pack.  I am not one of those miracle transformations you see in magazines where my body resembles anything close to “beach ready.”

But here’s the thing- this body is mine. I want to see where it can go. I want to feel it swim, face down my fear of “big girl biking” (because tri biking is nothing like the joyrides of yesteryear through the suburbs of Los Angeles!) and finally feel what it’s like to run, swim and bike this body to the finish line. I want to own that feeling, as sucky as it may seem when I train. I’m scared, totally scared, but I’m ready to learn how to own the fear too. 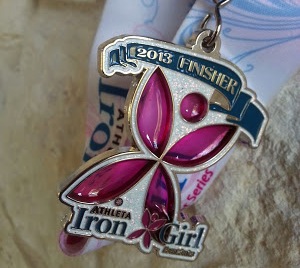 {thanks to Growin Up Mo for this pic}

Oh yes, and being a swag hag, the bling for the Iron Girl was pretty sweet too.

This year, I’ve committed myself to doing my first triathlon on August 11th in Pleasant Prairie, Wisconsin with Iron Girl. I just got my bike, helmet and gear to begin cross training for the triathlon sprint, but I have yet to hit the water and I’m a wee bit scurred.  I have done 6 half marathons this year (first ever) and now I’m going all out for the tri, but I’m totally nervous.  Adding in the swimming & biking seems insane, but I feel it’s a great way to cross train for my marathon-  I love running but a girl’s gotta cross train!

I’m putting this out there because I don’t even know where to start.  I’m wholeheartedly committed to this but of course, want to be insane in the most calculated way possible (ha!) and make sure that I go about this in a way that’s as smart as a crazy person can be.  I’m scared, but I’m ready.   The bike is here, I have a swimsuit and some cycling gear- now I need to get to work and I need a plan.

So, has anyone else done a triathlon?  What advice do you have for me?

Despite my nervousness, I am deeply excited about the prospect of conquering my first triathlon sprint with Iron Girl- it feels crazy, somewhat impossible, but totally right.  I will be swimming with thousands of other women, many, like me, who are busting through their own personal barriers and self-imposed limitations for the very first time.  Truly, it is time for me to sink or swim… or flop over on a bicycle (which has already happened three times yesterday…another story for another day, I can’t ride the damn thing).

I’m so excited to be doing the Iron Girl- 1/2 mile swim, 12 mile bike and 3.1 mile run.  I want that medal and mainly, I want to be a triathlete.   My former self would be shocked. I like doing that to myself apparently!

If you’d like to give Iron Girl Tri a try, enjoy this awesome Iron Girl Coupon to get $10 off-  (you know to put the cash towards more gear!).  You and I will be special Iron Girl sisters and I’m sure you’ll look sexy in a swim cap (never mind how I look in the suit!).  If you’re crazy, why not save some money, eh?

Use the Iron Girl Coupon code FRUGALBEAUTIFUL  to get $10 off the following Iron Girl Triathlons:

So, there you have it.

I can barely peel off skinny jeans without falling over, but I’ll be doing a tri- comment at will. Ha!

SAVE THE PUGS! The Virtual Pug Run…