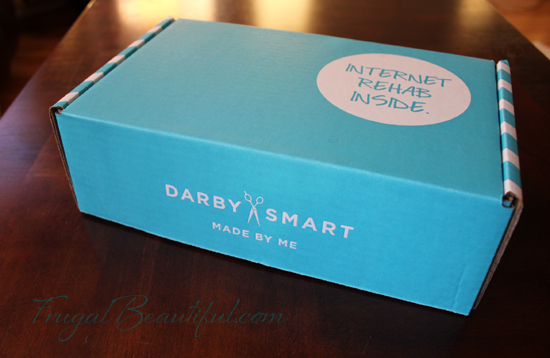 Hello from the Polar Vortex of the midwest!  For a California girl living in snowy Chicago, I’ve been going a bit nuts lately.  It’s been snowing, a lot, and that usually means the car gets stuck and it doesn’t help that temperatures were running in the negatives for awhile.  Thank goodness I had Darby Smart stashed on hand for those snowed in days when I needed to feel productive but running outside to the craft store was not going to happen!

I adore Darby Smart, I’ve done several projects of theirs, but this latest one was one of my favorites since it’s so unique and it was stupid easy to do!  Plus, it came with teeny tiny spray paint bottles, cute critters and mason jars, so it was basically a trifecta of awesome. Their animal canisters (or hipster stash jars) as I call them) were a blast to make and the box contained everything I needed. 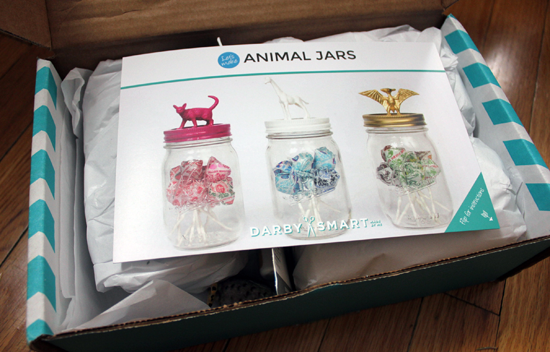 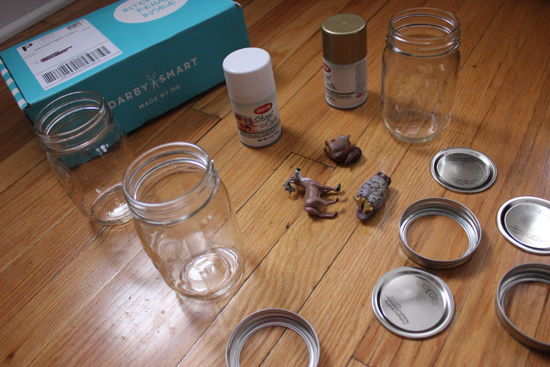 I was like a little kid unwrapping everything to see what animals I’d get-  I ended up with a stag, squirrel and owl.  Living in a hipster-esque part of Chicago, I squealed… this would be something I’d find at a boutique and I didn’t even have to get lost at the craft store figuring out what I should make.

I don’t know about you, but I rarely leave the craft store with exactly what I need to make a successful project- usually I end up with a few things I don’t need or forget something that would make the project go smoothly.  These crafts are tried and tested and everything I’ve crafted with Darby Smart had been solved for to make it hassle free and fun. 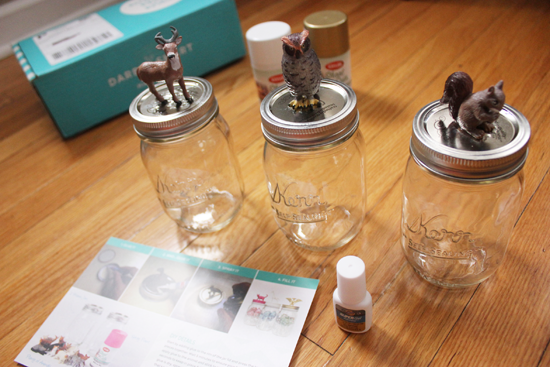 The craft was simple- glue the lid liners to the lid, the characters to the top, then spray paint.  Fiancé and I watched a documentary about the Sunset Strip to get ideas for our Route 66 wedding that’ll be taking place in Los Angeles and I glued, painted and schemed about what to put in my new little stash jars. 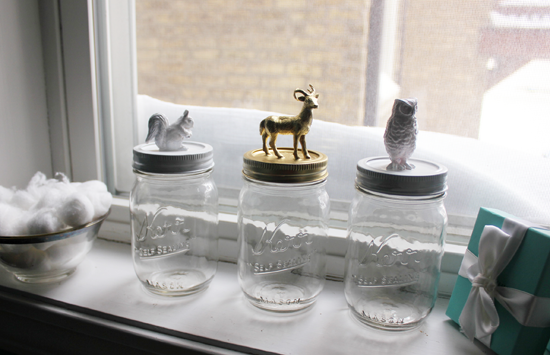 The project took about a half hour and I LOVED how they turned out.  They now house my buttons, ribbon surplus and a few of my easy-to-lose craft supplies like super glue, snips and push pins.   They look awesome catching light in the window and as you can see, the snow was almost as tall as they were in the window- so it was a snow day project I relished!

I love reviewing Darby Smart projects… sometimes I feel so ADD in craft stores or Etsy-Impaired but these projects turned out Pinterest-worthy and I’m really thrilled.  Plus, I had plenty of spray paint left over to use on other projects.  For $19 it’s a great bargain. You’re supporting small business and ending up with something you can DIY to shake the winter blues without getting sidetracked on Pinterest for ideas or buying way too much random stuff at the craft store- budget friendly goodness!

Be sure to check out Darby Smart…seriously, I love it!

PREVIOUS POST
"Things That Make Me Go Awww"
NEXT POST
"Frugal Date Idea: Imagine Together And Craft Your Goals"
4 comments so far.