Netflix, Amazon Prime or Hulu Plus? What’s the Best Way to Save on TV? 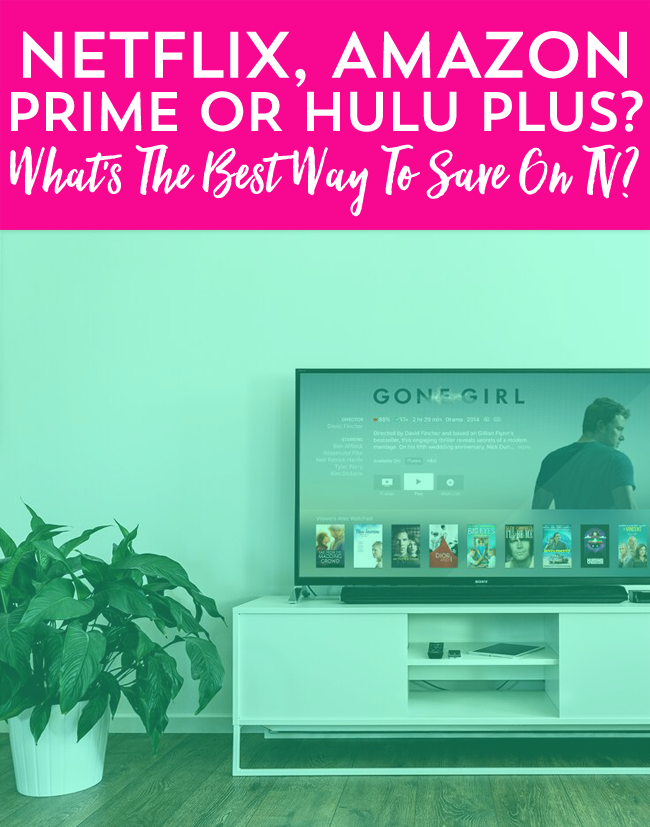 Whether you’re debating cutting the cable cord or unsure if your streaming plan fits your needs, doing your research is important. With the plethora of streaming plans and services available, it can be hard to figure out what’s best for you.

Unlike Netflix and Hulu Plus, the streaming service that Amazon Prime is only second to its free shipping. For $99 a year – which comes out t0 $8.25 a month – you get free two-day shipping on Prime-eligible items as well as access to their streaming library.

Amazon Prime, like Netflix and Hulu Plus, is also developing its own content. Shows like “Transparent” may be worth getting the subscription. Sometimes Amazon sells its Prime subscription for only $67 -an incredible steal if you like to shop and watch videos online. If you’re a student, you’re eligible for Prime membership for only $49 with a college or university email address.

One of the other benefits of Amazon Prime is that even if a show or movie isn’t part of the Prime streaming library, you can still rent it or purchase it. Try a 30-day trial for free here.

The original TV and film streaming service is still the top of the pack. Netflix stands out by still offering its original DVD service while also constantly adding new releases to their streaming collection. Plus, their original programming is the best out of all three – it even surpasses their cable rivals.

Shows like House of Cards, Orange Is the New Black and The Flash are some of the picks you’ll have access to with a Netflix subscription.

Pricing for Netflix is divided into three tiers. For $7.99 you can watch Netflix on one or two screens. If you pay $11.99 you can watch it on four screens. The DVD plan costs extra and comes with its own pricing package.  If you need to get your show fix, or want more up to date releases, Netflix may not be your best bet, but for around $8 a month, you get a lot of shows you can binge on without breaking the bank!

If you’re interested in keeping up with the latest shows, then you need Hulu Plus. Many episodes are uploaded about a week later while episodes are put up just 24 hours later, so you won’t have to worry about spoilers. Some shows even have past seasons that you can watch. Others only keep the current season. Still, if you’re cutting the cord and don’t want to wait for Netflix, then Hulu Plus is the best choice.

Plus, their movie selection is fairly decent and a Hulu Plus monthly membership is only $7.99 a month. You can also upgrade to $11.99 for no commercials for almost all shows . They also have their own exclusive shows, including “The Mindy Project.”

You can also get access to Showtime shows for $8.99 a month, which is perfect for Homeland fans!

If you don’t have a SmartTV or other streaming device, I highly recommend picking up an Amazon Fire TV Stick. It surpasses all other devices I’ve ever used and really helps keeps all my content (including Netflix and Hulu) in one place.

Choosing a streaming service depends on what you’re looking for. If you only want to watch new programming, then Hulu Plus is the best pick.

If you care about an interesting movie selection and love having unlimited access to entire tv series without commercials, Netflix is a great choice. Amazon Prime is the only one that offers another side benefits, with its free shipping – that surpasses its streaming service.  Regardless of what you pick, you’ll still be spending 1/4 of the cost of traditional cable which is usually over $100 a month and often requires expensive bundle packages.

Whether you choose Netflix, Amazon Prime or Hulu Plus, you’ll save lots of money switching to streaming instead of paying for cable!

How To Score The Best Deals On…

PREVIOUS POST
"How To Buy A House With a 650 Credit Score"
NEXT POST
"How I Found Rare Kate Spade Coupons Using Dealspotr"
5 comments so far.

5 responses to “Netflix, Amazon Prime or Hulu Plus? What’s the Best Way to Save on TV?”