Anyone who knows me, knows that I have quite the affinity for pugs and a special place in my heart for rescuing pugs.  Adopting through a rescue means that you get not only a quality dog who is already (mostly) potty trained and has overcome (some) of the annoying puppy tendencies by the time they reach you.  I picked Matilda up from her former family in a Chicago suburb and the rescue I volunteer with pretty much knew that I’d want to keep her from the moment I got the call…well, at least I knew it.

Matilda was estimated to be 6 months old when we got her, which turned out to be in actuality 8 months old, and she wasn’t neutered as we had previously thought.  (There is nothing like getting a dog home only to have her go into heat when you don’t have doggy diapers!) From the start, Matilda was full of surprises.  She had a few interesting habits, like her inability to pee outside due to the plethora of distractions that pepper a Chicago neighborhood-  loud buses, squirrels, pedestrians, the whisper of the wind that carrys the smell of a hot dog cart 8 city blocks away… which usually meant that in the first few weeks, it would take a good forty minutes to find a quiet patch of turf for her to find a spot to circle, uninterrupted in which to go.

Due to her lack of peeing, she had a tendency to pee in the house, especially if a guest came to visit and she hadn’t quite emptied her bladder on the last attempt.  One friend, in particular, made her pee no less than 4 times during his semi-frequent visits. She peed on the floor, on the couch, on her dog bed.  Pretty much anywhere she happened to be sitting when a friend or neighbor went to go pet her. 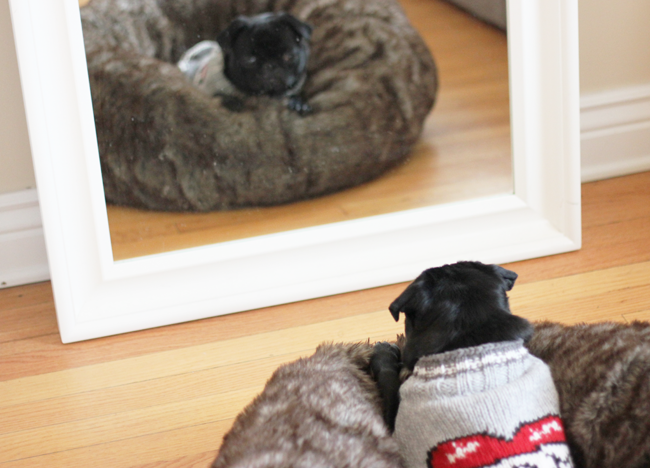 She barks at herself in the mirror all the time…a wee-bit high strung but she’s so lovable!

Another weird habit…she loves to go for the toes when she’s let out of her crate in the morning.  If I don’t get shoes on before the whirlwind is let out of her den, I can expect the weirdest sensation of a little pug face clamoring for my feet. I have no idea why this is a thing- I would appreciate some insight…I have never had a dog do this!

Then, there’s the barking.  We’ve pretty much overcome the peeing thing, but she still has held onto a bad habit of barking her head off at anyone who approaches her in the house, on the street, or heck, anyone who happens to be stopping at a red light while in the car. Currently, she doesn’t have a problem peeing in the house when excited (okay, sometimes she dribbles a little bit when I first get home, but then again, a little dribble is more of a compliment than a problem IMO), but she does love to bark at just about anyone.

Barking at passerbys when we’re out on a walk wouldn’t be so much of a problem if she wasn’t so darn adorable and people assuming she’s not completely insane.  There is a Boston Terrier that I frequently see in my new neighborhood during our walks.  As much as I love pugs, I also have an affinity for anything with a short little snout- French Bulldogs, Boston Terriers, and James Cavalier Spaniels.   We all seem to ban together in our love for weird, stocky bodies and ridiculously, ineffectively short snouts- and so clearly, we always want to go up and see each other’s dogs. Problem is, Matilda goes off like a rabid guard dog at just about anything that approaches her (even imagined people that aren’t really there)… also, at only 15 lbs acting like a German Shepard on riot duty, it’s kind of funny.  Her middle name is “Louise” since her outbursts lead me to trying to soothe her and says “geez louise!” and it just works. 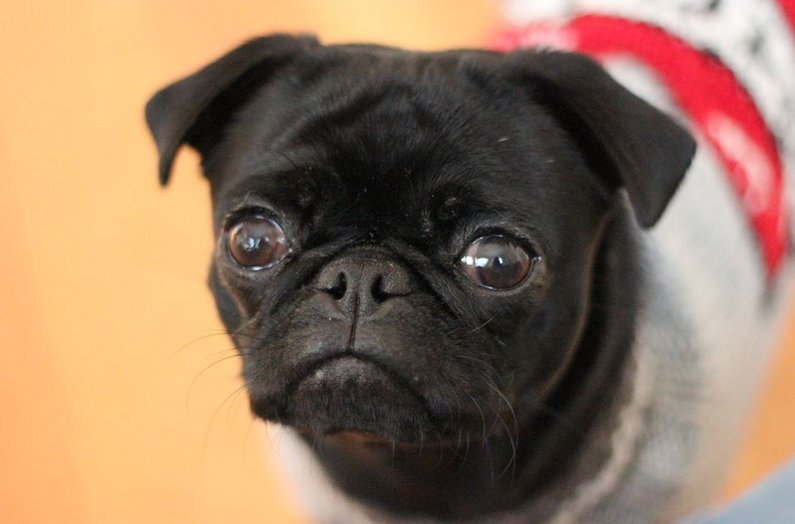 All in all, she’s a good dog- she just needs to be socialized around people a bit more.  When the weather warms up a wee bit, I hope to take her to dog parks and she how she does.  She’s a tender hearted little thing that just loves people….after she’s done attempting to scare them away. Anyone have advice on how to get her socialized? I feel so bad when she just will. not. stop. barking.  I’d love to have people over without her going into a 5 minute panic attack mode until she exhausts all the possible barks in her system.

Regardless, I can’t imagine life without my little Matilda, she has her quirks- but then again, so do I.  It’ll be our first Christmas together, and though I miss Ralph everyday (he was still with us last Christmas before we discovered he had a very aggressive form of cancer on his lung) I am so grateful to have another rescue pug in my midst.  She’s all furry fury but I love her.  We’re flying for the first time today- I’m super nervous but am hoping that it goes smoothly.  Here’s hoping- she has a pug grumble with my family to meet up and play with, so I hope it’ll be worth my nerves!

Matilda Sends Her Love, & So Do I!

Celebrating Christmas With The Fur Babies

Your Guide To Airline Travel With Pets