Saying Goodbye To Ralph: We Lost Our Dog To Cancer 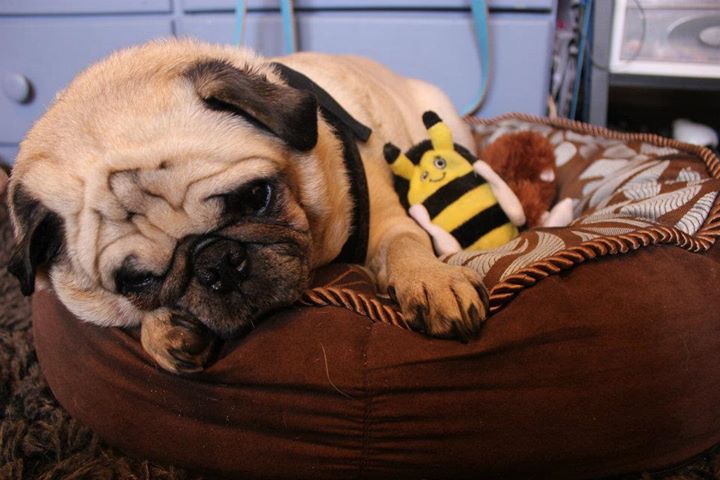 We discovered that Ralph had cancer just a few weeks ago.  The last few months, we thought he had pneumonia, several rounds of antibiotics and steam sessions to ease his breathing left no respite from his struggled breaths.  Eventually, between an xray in October to one in January at our primary vet, a large mass was discovered that was so big it virtually went from invisible to so pronounced it was disrupting the path of his trachea, a tumor so large and rapidly growing it was a like a large speed bump under his windpipe on the xrays.

We headed to the veterinary cancer center for a biopsy.  There we discovered that indeed, the masses were cancerous.  He had two large tumors and even diagnosing what the masses in his chest really were, cost over $1200.  Surgery and chemo would cost an estimated $7,000 but of course, we’d have to come back first to the veterinary cancer center to do an ultra sound to see if it had spread, (for another $900-$1000).  After my gut told me that if the tumor had spread one and was this aggressive, doubling in size in only a few weeks- then it had probably spread again.  Discussing it with our primary vet and reading other stories about lung cancer, we made the choice to opt for pallative care.  This fight would be painful and the survival rate was slim, little did I know how quickly it would progress.

I had a gut feeling that the first two tumors weren’t the end of it. I am not a doctor, but I started to realize that when you’re a pet parent struggling with a diagnosis, taking proper care of a terminally ill pet, you have to trust two things- the guidance of a doctor and your gut.  Gut wisdom and a doctor’s wisdom are vastly different but they usually go hand in hand. Our vets were very cautious about making sure we made the best decision for our pet, and not influencing our decision.

Sometimes I was frustrated, I didn’t want the hard decision of deciding when it was “time” for Ralph.  I feared I would make the wrong decision or that I would be cutting his time too short. I feared that the procedure would be traumatic.  Thank goodness it was none of those things.

A few Google searches of hearing other people’s stories (to watch for symptoms of suffering or the pet’s transition), and the advice of our vet, we still struggled with knowing when it was time to make that horrible final appointment.

Chris and I struggled with the decision. Apparently, we were both waiting for a blaring red flag that it was time to let Ralph go- but we saw that there aren’t a lot of big red warning signs, but small ones, to indicate that Ralph was suffering.

Ralph stopped eating full meals, so he couldn’t take his pain pills.  He would wake up and start panting, groaning (more than usual, he was an older dog who was very vocal) and couldn’t seem to get comfortable.  The last day, I would go to pet him and he would move away or once, he snapped at my hand.  Ralph didn’t have a mean bone in his body, he was in pain, even a comforting touch would hurt him since he couldn’t get the necessary dosage of pain relief that I could hide in what little food he would eat.

I took Ralph in to the vet last week because I was worried he was suffering and wanted to make sure the pain pills were enough.  At that time we discovered three more small tumors in his chest.  We upped his pain relief dosage, but he was losing his appetite and two days later, it was apparent he wasn’t getting the relief he needed. He was slowing down to the point of needing to be carried out to the tree to relieve himself, and he seemed dazed and distant.  He wasn’t responding to things that use to bring him joy, his behavior began to change as he was coping with how awful he felt.

As stated, Chris and I both thought there would be one trigger that let us know it was time.  I felt like I made the decision alone, though the doctor agreed with my choice.  What it took for me to make the difficult to decision was the culmination of little signs it was time (there was never that perfect answer to be sure it was time) and a discussion with a doctor to be sure I understood the medical signs coupled with his behavioral signs that it was time.

I asked the doctor if there was anything we could do to keep him more comfortable, and when it became evident that I could not ease his suffering with medicine, I made the very difficult decision to let him go peacefully. 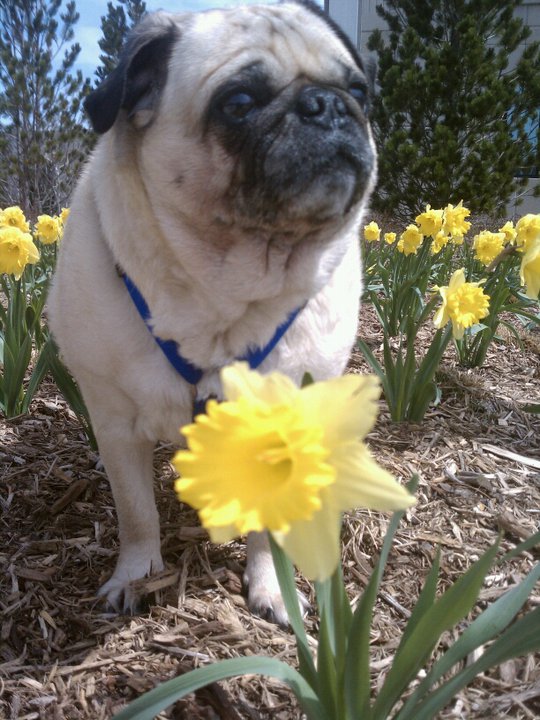 I really wanted him to go naturally.  Sometimes though, different illnesses don’t allow for a peaceful, natural passing.  The tumors on his lungs were making it difficult for him to breathe, he was struggling to move and struggling to get oxygen. I can only imagine how uncomfortable it would be to struggle to get air even while resting.   The tumors were sizable enough that it was pressing on his other organs, and causing him pain to be picked up.  It became evident that the blessing of falling asleep naturally, and passing peacefully would not be a reality.

He had been brave for so long, it was my turn to be brave. I hated the decision, but when it came time to do, it made sense.

Of course, we flip flopped on whether it was right or it was time.  It never seems okay, but it seemed right.  He was suffering, we could see that, but then we found hope when he finally started eating again (albeit a few bites of McDonald’s fries, his favorite thing).  When it comes time to make the decision for your pet, most times you will cling to any hopeful signs to ignore the signs that it is time.  Most owners I spoke to said they usually felt they waited too long, not that they made the decision too hastily.  The vet helped me make the decision, but she said that I didn’t seem ready and I could come back when I was, no hurry. I told her that it was no longer about me, it was about him, I had to make the decision for him.

The truth is, you’re never ready, you have to do what’s best for your pet.

I feared the procedure.  It bothered me to my core.  By the time we arrived, it caused me pain to see him in pain. I suffered watching his suffering. When you realize your pet has no quality of life and he’s hurting, your heart is breaking just to find them respite from their pain.  After consulting with the vet a final time, we wrapped him in a Cubs blanket and brought in his favorite toy.  He was swaddled in my lap, and he went peacefully.

The doctor said I would know when it was time, and as much as I wish someone would have taken that burden off my shoulders, I did know.

I knew it was going to hurt, and it does.

When I woke up this morning, in those little moments before one is fully awake, I rolled over expecting to feel him by my side.  He’s gone now, but I’m so grateful to have had him in the first place.

I struggled whether to write about this- but I hope this post brings comfort to anyone who is going through cancer with a pet.

Keep them comfortable for as long as you can, fight it with medicine as long as you can.  When fighting is no longer possible, and a hard decision must be made, do what is best for them. Forgive yourself for the anger, guilt, sorrow and feelings you’re struggling with.  This was my first time going through cancer with a pet- I’ve never had to put a pet down and it was really, really hard.

Truth be told, I feel grateful for sorrow.

You cannot miss what you didn’t first love.  If I could do it all over again, I would rescue Ralph or any pug, just to feel this tremendous bond.  This rescue pug changed my life and I’ll have a Ralph shaped hole in my heart, but it was worth it all to have those three years with such a special little life. 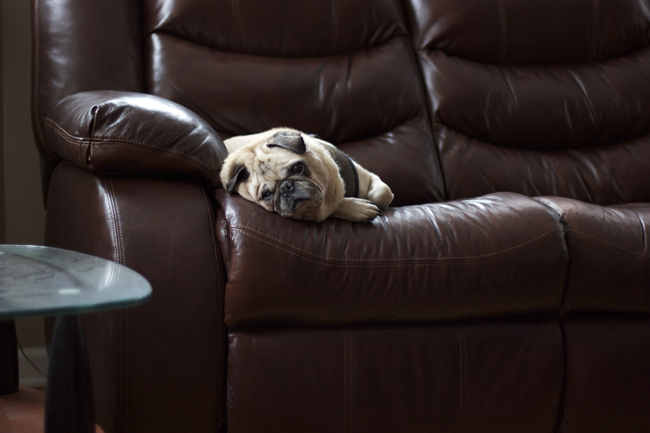 Thank you to everyone who helped me support the Northern Illinois Pug Rescue and adopt Ralph three years ago.  Thank you for your support when he was diagnosed with cancer, and now, as we say goodbye, I appreciate each of you.

Pet rescue changes lives. I never would have imagined the tremendous impact his adoption would have on my life.  I remember that first day, seeing him for the first time, walking towards me in the snow, handed off from a rescue volunteer.  We were both scared, but we bonded in the fact that neither of us knew what to do, but we instantly felt a bond.  He saw me through a rough patch of grad school, two moves across country and three places of residence.

If I could do it all again, I would.  No matter how much pet cancer sucks, it was worth every tear, every smile, ever struggle and every day- each in their own way, were precious little victories.

Celebrating Christmas With The Fur Babies

Rescuing Ralph: We Need Your Help

PREVIOUS POST
"Frugal Living Story: How I Saved $15,000 Per Year By Living Healthy"
NEXT POST
"How I Get Kate Spade For Cheap: My Kate Spade Outlet Haul"
24 comments so far.

24 responses to “Saying Goodbye To Ralph: We Lost Our Dog To Cancer”