Matilda, Cue The Confetti! We Have 200 Virtual Pug Runners So Far! 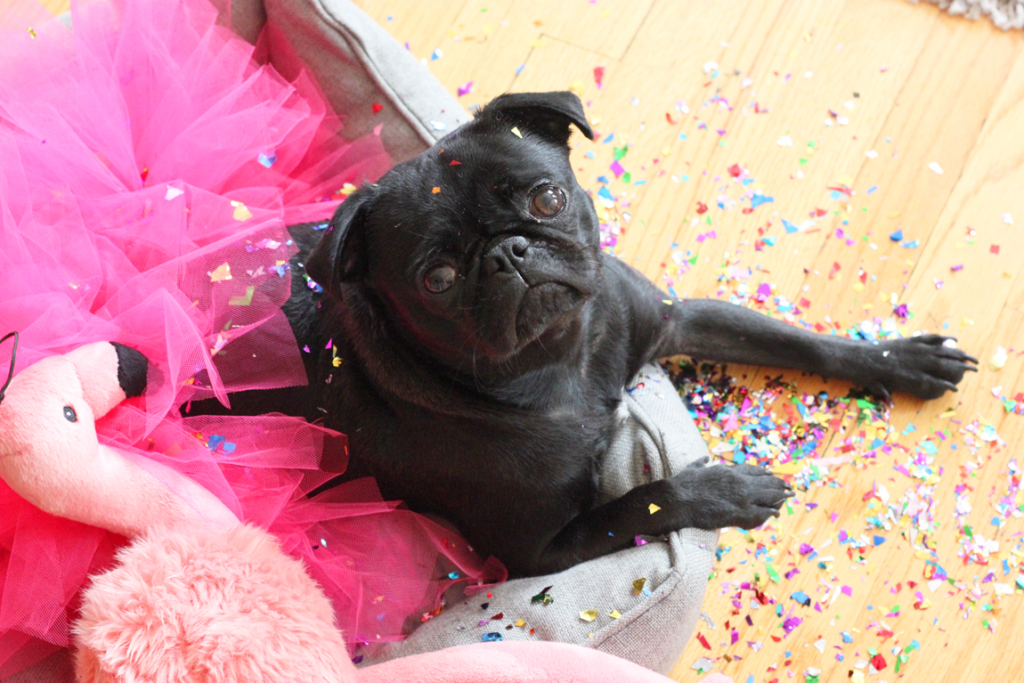 Matilda is a total party pug.  She is full of spunk, loves treats and does this adorable thing where she tugs on your clothes when she wants your attention- looking up at you with those adorable brown eyes.

I got Matilda from the Northern Illinois Pug Rescue in 2014.   Her owners didn’t want her anymore- they said she wasn’t a good fit for the family.  I picked her up at a truck stop, and we had no information on her.  She came only with a pink collar that was sized for a cat, and a beat up toy that looked like it came from a vending machine…which wasn’t really dog safe.

When I took her in, she was terrified of people.  If someone approached, she’d defensively bark, then back into a corner and wet herself.  She was fearful of people, and would go into a fit of anxiety and aggression when another dog approached.  Trust me, I had to apologize to many people who assumed this little dog was cuddly- only to have her panic and launch when they approached us on the street.  Our first few vet appointments were almost a no-go, she was terrified and flighty around the vet techs, who kindly were patient with her.  She barked and growled nonstop, putting her whole little body in defensive motion- making in nearly impossible to take a temperature or give her vaccinations.

It’s taken well over a year to get her to where she is now.  Though she is the sweetest dog, and loves to snuggle in my lap and play fetch in the house, sometimes her previous life catches up with her when we venture out in public.  She still barks at people a bit, and has moments where she relapses into aggressive dog mode at the approach of a stranger.  Luckily, she’s finally able to face the vet’s office without a complete meltdown, and is slowly but surely getting her anxiety at manageable levels with some treats and positive reinforcement.

At dog parks and meetups- she still cowers by my feet, but once in awhile, she comes out to play and forgets to be afraid, allowing herself to get lost in the moment and chase somebody else’s tennis ball.  In those moments, when she’s happy and playful around others, I am happy and grateful- it’s what I always wanted for her.

It’s been a labor of love to help rehabilitate her to get her comfortable around people. I still don’t know what she was faced with in her past that got her this way- I’ve never worked with a pug that needed this much TLC emotionally, but she has been worth every training session, and her progress has been amazing.

It’s stories like this that compel me to fundraise for pugs in need.  It’s second chances for pugs that are abandoned and unwanted, that make it worth it.  It’s the idea that someone like me, who just needs a companion- might find their special furchild that really makes my heart sing.

We just reached 200 Virtual Pug Runners.  We need 275 more to hit our fundraising goal.  We have so much to celebrate, but we have far to go!

Do you know of someone who would like to run for pugs?  Have you been wanting to sign up but you forgot?  Need motivation to get back on your fitness routine?  This pug medal is awesome, and $20 of each registration goes to NIPRA. 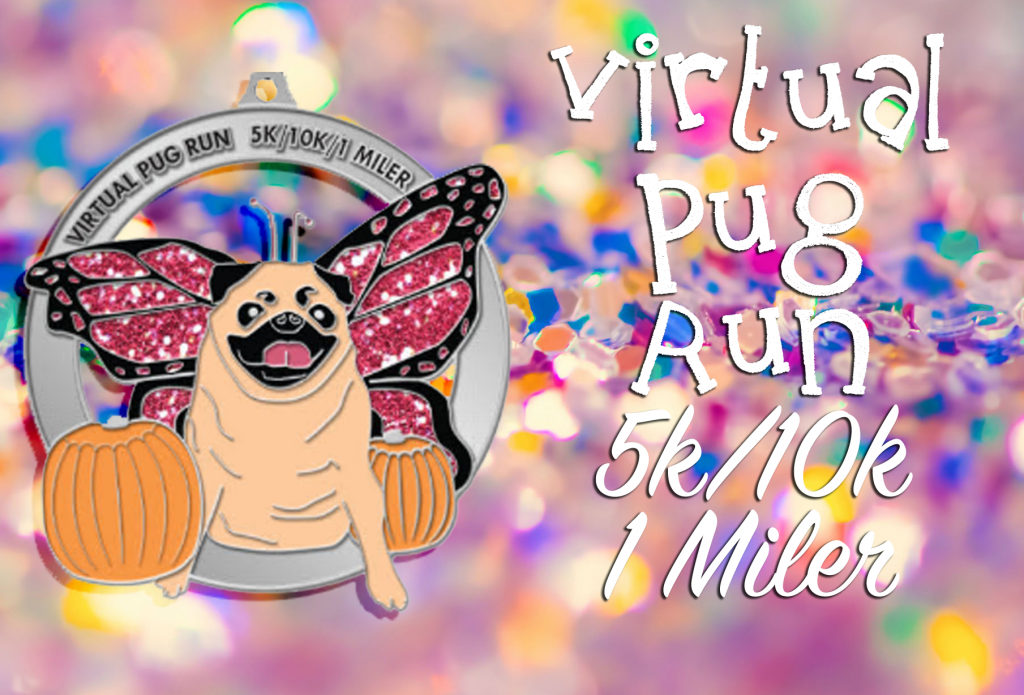 In my 3 years of being a foster mom and voluntneer with NIPRA, I’ve seen pugs come in that have had rough, rough lives.  We have had several pugs that were bred for profit until they were ill and no longer “useful” only to be left in the streets, or abandoned in parking lots when they were done nursing their pups.  When I received Ralph, another foster came in that had been bred so often, she had mammary tumors and was left to fend for herself.  When we save rescues, we not only save lives, but we also give a family who might have bought a puppy from a bad breeder (not all breeders are bad) who is only in it for profit, a chance to get a rescue instead.

We also work with pugs that would have been “unadoptable.”  You know the type- they’re “too old,” or perhaps they’re missing a leg or have to take seizure medication- to us, no dog is “unadoptable.  When we take in these pugs at NIPRA, we put them in a loving foster home until the right family comes along…and we believe, no matter what the case- there is always a chance that the right family will come along, even if it takes a bit longer.  No dog has to live on death row, even if they’re on hospice, they can live comfortably for the rest of their days with a NIPRA volunteer.

If That Didn’t Convince You…How About This Face?? 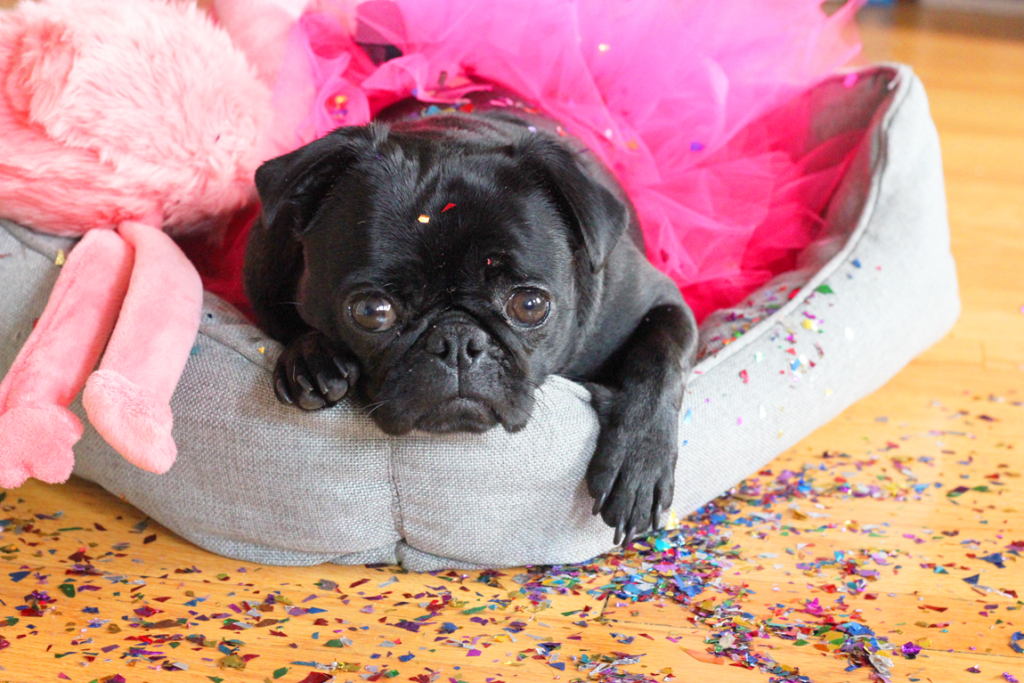 Look at that face.  Just look at it.  Are you as much of a sucker for cute pugs as I am?

Thank you for your support, your shares and your miles- it truly makes a difference.

Give More. Save More. Why It’s Vital…

13 responses to “Matilda, Cue The Confetti! We Have 200 Virtual Pug Runners So Far!”