Did You Have A Happy Halloween? The Virtual Pug Run Results Are In! 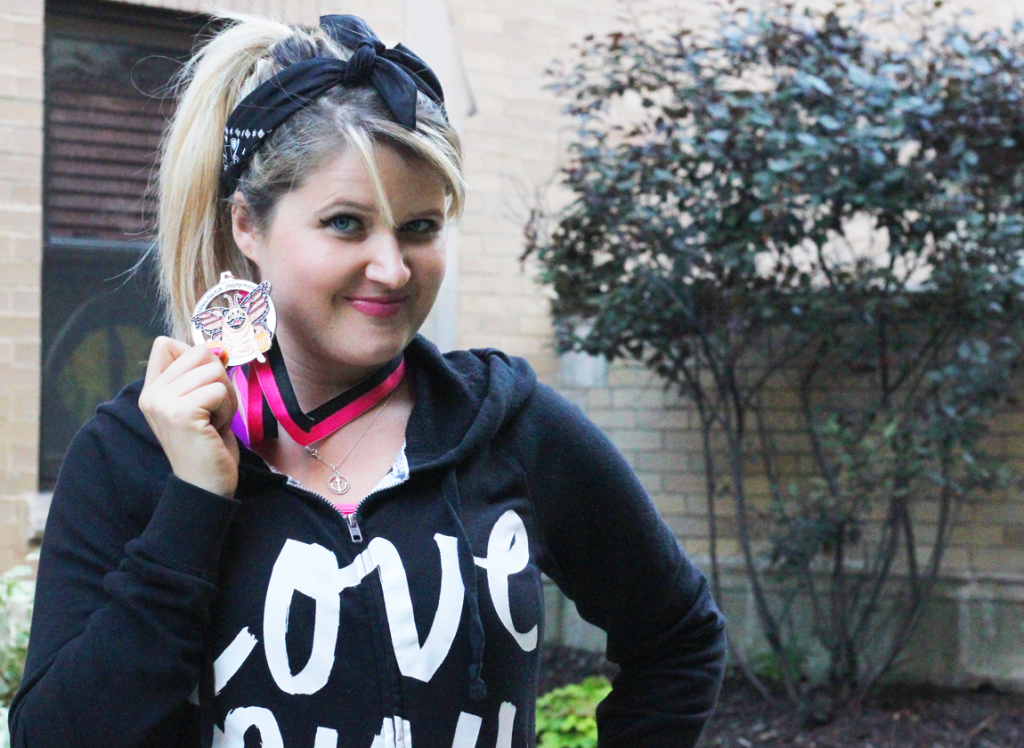 I have officially run my 5k to earn my Virtual Pug Run medal.  After mailing out the last batches of international and group orders, we have tallied up the total donation for the Northern Illinois Pug Rescue.

I placed the medal order on faith this year- instead of waited to see who would want to join up, I went ahead and ordered early and set the fundraising goal even higher than last year- at $9,500.  Ya, my stomach was in knots- but I had a guy sitting across from me on the couch who told me to go ahead and do it.

That guy, is my boyfriend and partner, who also helped pack up over 400 medals this year. He’s pretty awesome, and now, he has finally seen the entire Harry Potter collection from start to finish and has leveled up on his professionalism with packing tape to “expert” status.  He’s a champ, seriously.  I don’t think he knew how long it would take, but agreed to it regardless! 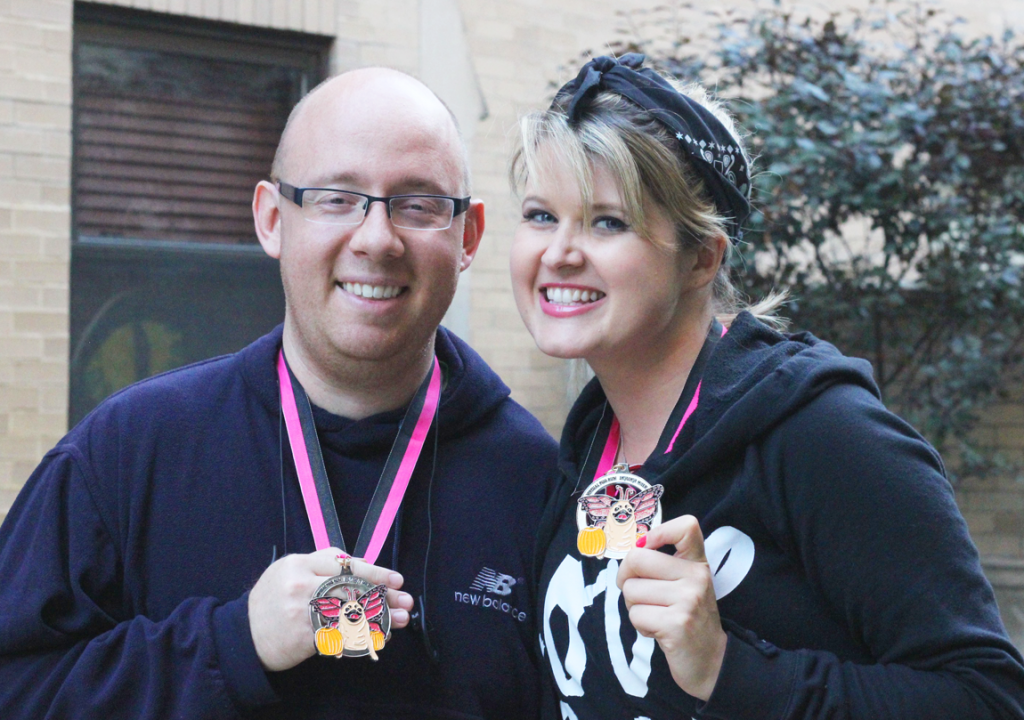 See, the thing is, pugs aren’t even his favorite breed (though Matilda has totally won him over). He’s a Boston Terrier kind of guy, he’s always had them growing up, and I’m very excited to share that we added another member to our brood- a rescued BT named Bo.

A few months ago, he considered getting a puppy, but wanted to adopt a rescue.  He waited several months for the right fit to come along, and now, we have another snort monster to dress up in costume and spoil with treats for Halloween. 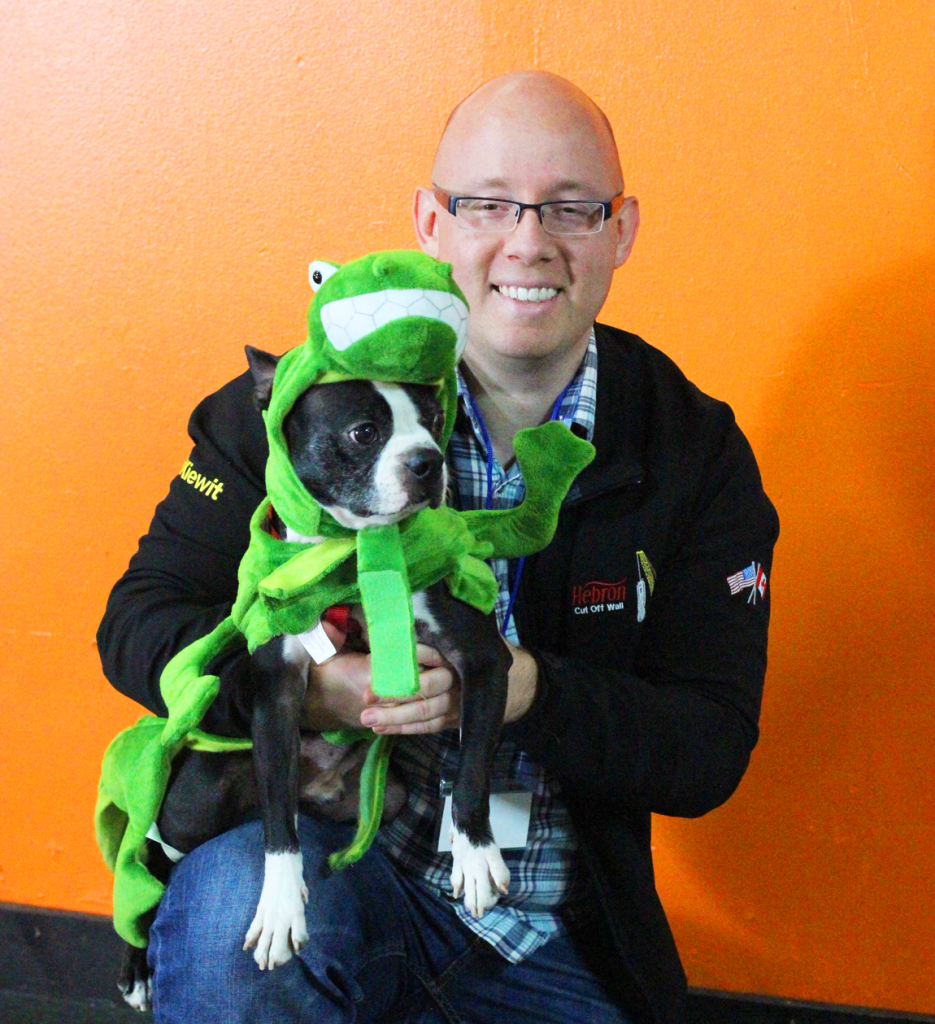 I also have some good news about Matilda- after many meetups here in Chicago and dog park visits, she is slowly but surely getting over her anxiety around people and dogs.  When I first fostered her in July of 2014, she was so anxious around people, she would bark the entire time we were at the vet, for her it was just nonstop panic.

To go potty, it would take 45 minutes of walking for us to find a quiet city spot for her not to get distracted by people/dogs and use the bathroom. She was freaked out by people, even across the street and would go into barking fits, lunging at people or dogs even a block away.   New people would scare her so much, she’d pee/poop herself if someone entered the house.  At times it was pretty rough just to get her around folks without completely stressing us both out.

We’ve come a long way, and there is still a ways to go with her, but this last meetup we did was a huge success.  She played quite a bit, and while she still barked at a few people, she didn’t hover around my legs (I honestly think the pumpkin costume served as a “thunder jacket” to help ease her nervousness). 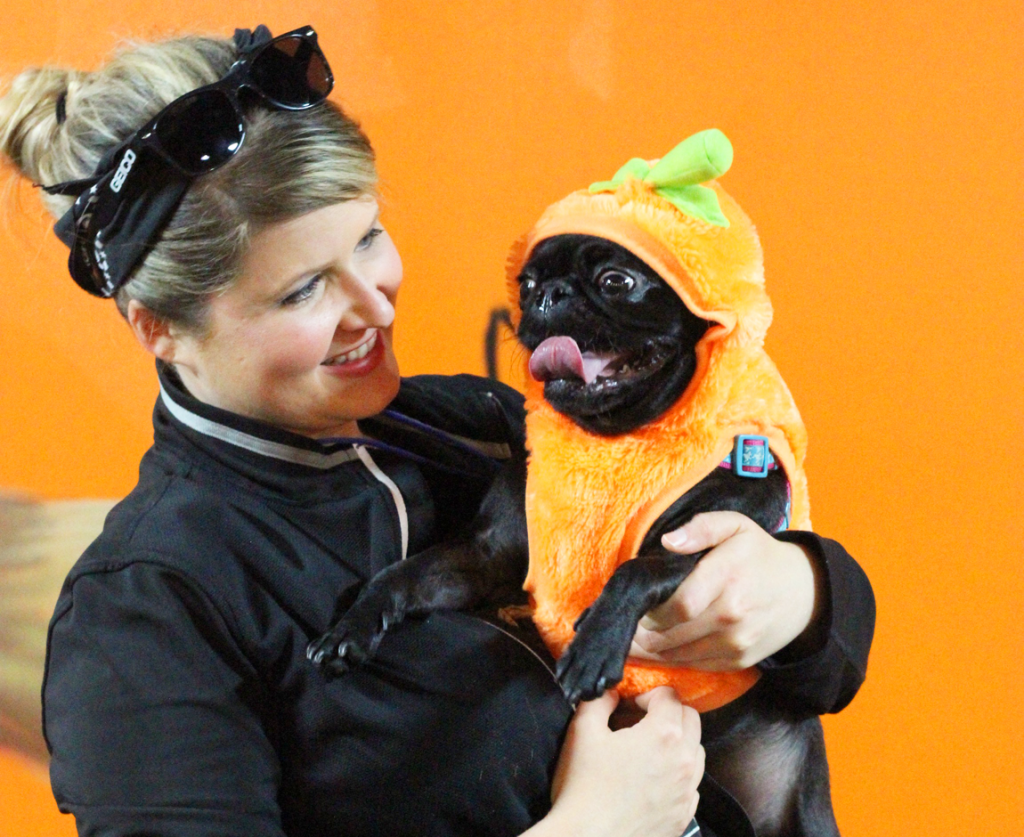 Matilda is a true sweetheart who just needs a little bit more rehab and TLC to be comfortable around people.  If you’ve ever considered adding a dog to your life, please seriously consider rescue.  I promise, not all of them are as anxious as she is, but I wouldn’t trade her for the world- her quirks keep me on my toes and her snuggles are worth it.

While most people know that buying from breeders means one less dog in a shelter gets a home- as a volunteer with pug rescue, I’ve seen that it sadly, has more impact than that.  Buying from breeders is not just a matter of preventing one rescue dog from getting adopted, if it were that simple, I wouldn’t be this mad with the scenario I see with breeding over and over again- with pugs, frenchies, bostons and bulldogs.  These dogs go for top dollar so that attracts some shady people to the industry.

Since I began volunteering with the pug rescue, I have seen purebred dogs ending up in rescue because they weren’t profitable and got dumped by shady breeders.  Yep, dogs that were bred constantly until they couldn’t have puppies anymore, then left in a parking lot.  Dogs that were bred poorly and had issues with their spine and limbs were relinquished because the breeder is in the business of making money, not keeping the “unwanted” ones that are often expensive to rehabilitate because they were bred recklessly.

We’ve taken in dogs that were dumped because they were born with even slight deformities, thus, not being able to be sold for the going rate.  No, not all breeders are shady, some are great- but as a volunteer, I’ve seen the dark side of puppy mills and “breed for profit” types that dump dogs simply because they cost money, not make money– and yes, it is the rescues that spend the money required, to find them homes.

It may be Halloween, but to me, shady breeders are nothing short of frightening and unfortunately, there’s a lot of shadiness going around.  If you haven’t considered adopting from a breed specific rescue, a quick Google or Petfinder.com search could change your life- it’s changed mine.

I have to say it, because some of the pugs in my family were from breeders before I started volunteering- but I will never buy a bred-for-profit dog ever again.  There are great breeders out there to be sure, but the dark side of the industry means that some unscrupulous practices for breeding quickly to make money, and the “unwanteds” get dumped on non-profits and volunteers, which means that they also absorb the cost of rehabilitating and doing the right thing for dogs.

There are too many non-certified breeders (or just people that mate dogs for a quick buck to sell on Craigslist) that have no accountability for the ones they don’t want anymore.  If you have a purchased dog, I’m not trying to shame anyone, I’ve had them too- they are great dogs, and there are good breeders out there, but due the sheer amount of puppy mill rescues and female dogs we find abandoned that looked as if they just weaned a litter, I won’t do it anymore.  If you want a specific breed, trust me, there are lots of breed specific rescues that you can foster or adopt with! 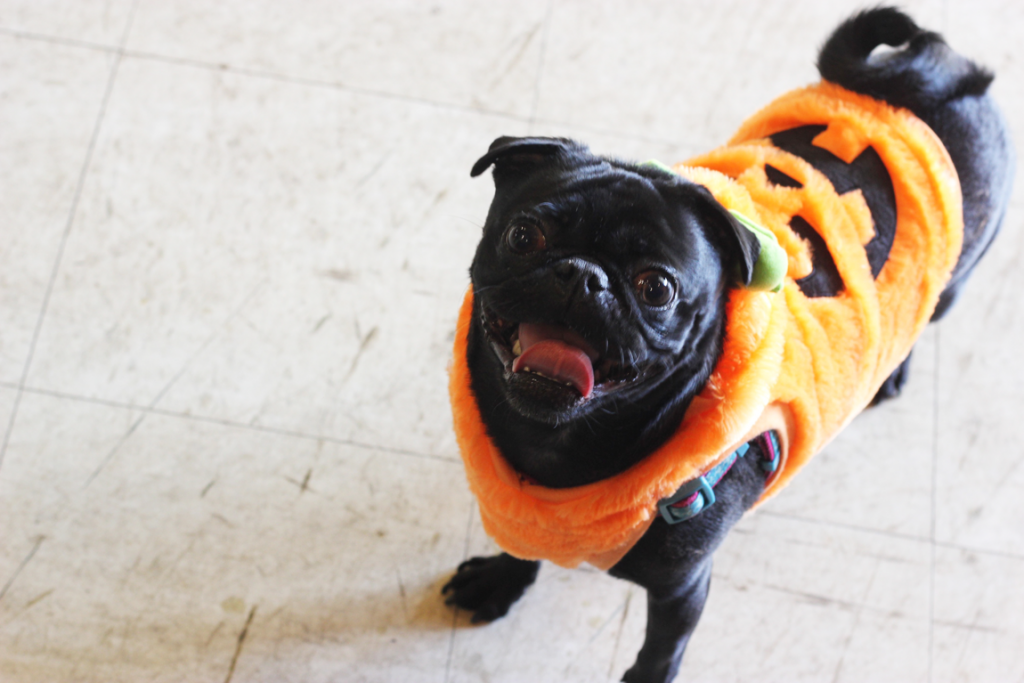 I mean really, look at this face.

So, now, I’m off my soapbox.  You really just want to know how much we raised, don’t you? 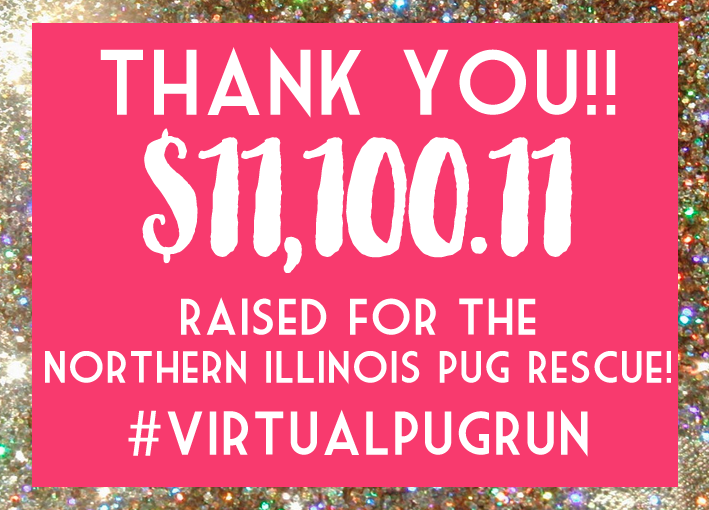 Thank you to everyone who shared the Virtual Pug Run, or signed up to run with us.  You literally saved lives this year, and I cannot wait to present NIPRA with a check for $11,100.11 (yes, a lot of elevens, isn’t that cool?)

Going Across The Pond: Discovering The Truth…

4 responses to “Did You Have A Happy Halloween? The Virtual Pug Run Results Are In!”