My Advice For New Runners (Or Anyone Scared To Start) 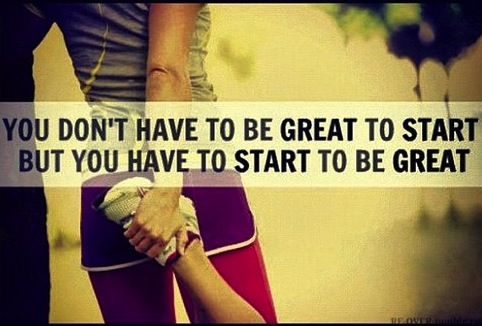 First Things First- Don’t Be Ashamed Of Where You Start.

Many of us come to running with not just physical weight we want to lose by getting fit, but there’s also the emotional weight, the baggage, that brought us to running in the first place.  Many of us feel like we don’t fit the stereotype of what a runner looks or acts like.  We belittle ourselves for years of inactivity or worry that we will fail if we try.

The first step in how to make running a habit and get fit is to forgive yourself and don’t be ashamed to start exactly where you are.  This is just a starting point, it doesn’t define you.

Then, Get Fitted For Shoes. Don’t Be Intimidated.

Not sure why, but when I started running, I was fine walking into a run shop to buy cute tanks and shorts, but getting fitted for the right shoes scared the bejeezus out of me.  I was nervous about running around the store and horribly self-conscious about the process of fitting (which really, ain’t no thang baby).

The benefit of getting fitted is that you’ll be sure to get the right pair to prevent injuries and most run shops offer a 30 day money back guarantee, even if the shoes show wear.  Invest in shoes, get fitted properly and you’ll feel so much better for it!

Choose A Race That Will Both Excite & Scare The Cr*p Out Of You.

Don’t just choose a goal- sign up for a race and pay for it.  You will not believe how motivating losing $100 and bragging rights can be when you want to throw in the towel!  My biggest piece of advice is that you need a goal that’s “too big to fail,” meaning- that you’ll have money and pride on the line, but it isn’t so hard that you physically can’t complete it.  It also needs to be fun, inspiring or loaded with perks.

When I started running last year, I couldn’t even run a mile, but when I saw the Tinker Bell Half Marathon medal, the thought of earning this bling excited me so much I was compelled to sign up. Of course, the idea of running 13.1 seemed insane, but not impossible.  Signing up for a half marathon put both a financial and a time commitment to my goal. Pick a goal that stirs your soul and scares you just enough, then put the money behind it!

Cars Driving By Don’t Notice You. Just Get Out There.

If you’re nervous to get started running outside because you feel you’ll be scrutinized by judgmental drives, don’t be.  Most drivers are busy trying to rock out to Katy Perry without being noticed or their mind is elsewhere.  Even if they do notice you huffing and puffing it’s probably for 20 seconds or less as they zoom by you on the roadway.

Usually, when you’re nervous to run it seems worse in your mind, just get out there and run- you’ll see it’s not as bad as you make it seem.  Even hundreds of miles later, I sometimes still try and use that excuse, but it’s really silly!

All You Need To Start Are The Basics, Don’t Overbuy, Don’t Overspend.

You don’t need supplements. You don’t need energy bars or chews or gels.  You don’t need compression socks.  You also don’t need expensive GPS tracking systems- at least, when you first start running.  Marketers are very savvy in telling us we “need to buy” to get started, but honestly, you just need the basics and the desire to work for it, which is something you can’t buy.

When I started, I had one dry wic outfit and one pair of shoes that I used for a month (hand washing after every run and left out to dry) until I was ready to get a variety.  You may feel the pressure to stock a wardrobe- don’t. Nobody is judging you except for the perceptions in your head!  In addition to not wasting money on stuff you don’t need yet, avoid the temptation to buy high-end gear because you feel you need to.  I used a free app on my phone, NikePlus with an iphone armband I got for $3 online (it still works 6 months later).

I was scared to start, I hope you’re not.  Every mile holds the possibility to change your body and change your life for the better.

I believe you can run, even if you have to walk when you start (I did!) -be brave, take that first step!