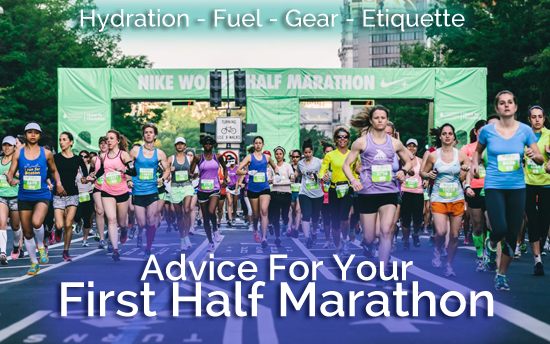 I’m about to run my 11th half marathon in 2013, the Women’s Running Series Half Marathon in Nashville and I am just as psyched, nervous, excited and ready for this as I was with numero uno.  While I have hundreds of miles on my shoes this year, my first half marathon ever, was this past January- so I still feel like I have that “new car smell” when it comes to running the glorious 13.1 miler and can still remember my first race like it was… oh, 8 months ago? Ha!

Here’s my advice for you sweetie… because you so got this.

I have seen 80 year olds complete half marathons, and people of all shapes, sizes and abilities run this distance.  If I can do it in all of my wheeziness, you can do this.  If you have to do a practice run of 10 miles just to feel confident, do it. If you encounter a catastrophe and need to walk on race day, do it- half marathon #2 left me with an irritated IT band which meant I walked 10+ miles.  Even the worst that can happen won’t be that bad.  Run on my friend.

Now that you’ve got the confidence, let’s get into the nitty gritty…

Many first time marathoners overcompensate when it comes to hydration and fueling, but please don’t.  Be aware of the water stations on your race and while you might be tempted to CamelBak it with a complete fuelbelt of gatorade, trust the aid stations unless it’s a really, really hot day and you’re a slow runner (like me!) While it’s totally possible to be dehydrated and suffer from an electrolyte imbalance, it’s also possible to overhydrate which can lead to stomach aches, that horrible sloshy-tummy feeling and of course, having to pee four times during the race.

Humid and hot days mean more sweat, but unless there’s a heat advisory, don’t panic about hydration and don’t drink too much gatorade, you could end up wanting to toss your cookies or get the runner’s trots from eating and drinking a ton of the typical “runner stuff” on race day.  If you don’t know what “runner’s trots” are, Google it. You’re welcome.

So, what about Gu?  First off, try Gu before your big day to make sure it doesn’t mess with your stomach.  If I could tell former self to tone it down on all the hyped-out performance food made for runners, I totally would.  No goo, chew or bar will give you magical runner wings, but it will make you feel ill.  Go with what you know and don’t freak out about performance on race day- it will be a PR no matter what you do.  I’ve seen (and felt) more issues with overdoing the Gu on race day than not having enough.

Make sure you eat a solid breakfast (I usually have a banana for regular races and a bagel with peanut butter on half marathon days with coffee), then Gu at mile 5-6 when you’re near a water station.  On one half marathon I was so hungry by mile 4 that I wanted to punch someone- if that’s you, by all means, eat the Gu early!  Grumpy-hungry runners are no fun for anyone.

3.  Find The Gear That Works For You

I always wear compression socks, I just do.  I heard I was supposed to wear them and I like how nerdy they look and fear shin pain, so I have several pairs.  I also wear an iFitness belt that tucks in my inhaler, clips on my bib and I also throw in a tissue (on cold days your nose will run), chapstick and sunblock (for summer days, the sun will be up by the time you finish most half marathons).

I have a cheap pair of sunglasses I picked up for free at an expo booth to run in, no fancy running sunglasses yet- but they are light and stay on my head so I haven’t replaced them.  Being chesty, I also always run in a Moving Comfort Fiona Bra which is made for high impact and a Sweaty Band, but beyond that- it’s whatever I feel like.

Find what works for you, but always use Body Glide on any rubby parts (especially if it’s over 40% humidity or going to rain) and if it’s going to be cold, you can hit up your thrift shop for cheap gloves, hat or light jacket to toss to the side after you start running.   I know that feels really weird to throw clothes away, but most races donate these items back to people in need, most races don’t hand out mylar blankets (if they even do) until after the race and you could be waiting up to an hour to leave your corral.

I’m a run/walk/runner so there’s no shame in being slow, but if you do need to stop running, I do a quick hand wave and point in the general direction I’m heading.  If you’re walking, pull over to the sides- most people don’t do this, but you’re awesome and I know you will.

Also, if you’re running with friends, be aware of the space you take up and break up the groups.  Trying to pass a wall of women walking in giant tutus who are chatting like this isn’t a half marathon is a total drag.  If you’re in a group, walk two abreast and line up behind one another- not in a mob.  Have fun and chat, but be aware of other runners.

5.  Apparently Pooping Before A Race Is A Thing

Yes, pooping is a part of many folks “pre-race ritual” I didn’t know this (nor is it one of my things, maybe I’m weird?) but be aware about long Porto lines and yes, really stinky ones.  That’s all I have to say about that, it’s just one of those weird things nobody tells you until you experience it yourself.

6. On That Note, Sometimes Runners Are Aholes

For the most part, I love runners and I love being a runner amongst other runners- there is nothing like being a part of a 30,000 group that is all running towards the same finish line.  Honestly, running half marathons are oddly some of the best 2.5 hours of time I’ve spent- it’s just that awesome to see a marathon happening while you’re in one.

That being said- sometimes on race morning people get nervous or, they get “IN THE ZONE” to where you wonder where they left their manners.  I like to be in the “zone,” but you may experience a few runners who are in a “ZONE” you’re not in.  One of these people was my very own man who was just acting weird on race morning- I was just totally jazzed to be there and he was stoic and focused.   I called him out on acting like a total jock and we have since had more fun, but just know, everyone runs for their own reasons and some people take it really, really seriously.  True story.  Just be prepared for some color.

7. Learn To Hurry Up And Wait

Yes, you typically have to arrive really early for the big half marathons and the bigger the races, the longer it takes to launch.  If a race starts at 7am, you should be there no later than 6:30 (unless the corrals close sooner), then after the National Anthem and announcements they’ll start the race, but that doesn’t mean you’ll go right away.  Sometimes they will launch wheelchair racers, then the elites, then go on to release the corrals by pace or in alphabetical order- which means if you’re in Corral E you could have an additional 30 minutes or longer before you can start running.

Usually you should be able to estimate your wait time by looking over how large the race is and seeing what corral you’ll be in (which could be in your race packet or info you’ll get at expo) and most websites will let you know the time between corrals if there will be a staggered start.

8.  If You’re Traveling, Take It Easy

If you’re going on a race-cation, do not go crazy with walking around, trying new foods or standing in long lines for events or attractions.  You won’t feel fatigue from traveling until race morning and by then you’ll be facing down 13.1 on tired legs.  If you can sightsee, do it afterwards, even on sore or wobbly legs.

Every time I’ve flown somewhere for a race, it’s been harder to run fast.  Any time I went walking around to tour or visited amusement parks, even while going to bed super early, I’ve bonked on race day- either from fatigue, or my joints and muscles are feeling the strain.  If at all possible, take it easy!

I’ll be running the Women’s Running Series, Nashville on September 28th, 2013, who is with me?
It doesn’t matter if it’s your first or your fifth, it’s gonna be fun!

How To Do A Sock Bun For…

Healthy Living Is A Habit #BeActiv

14 responses to “Advice For Your First Half Marathon”