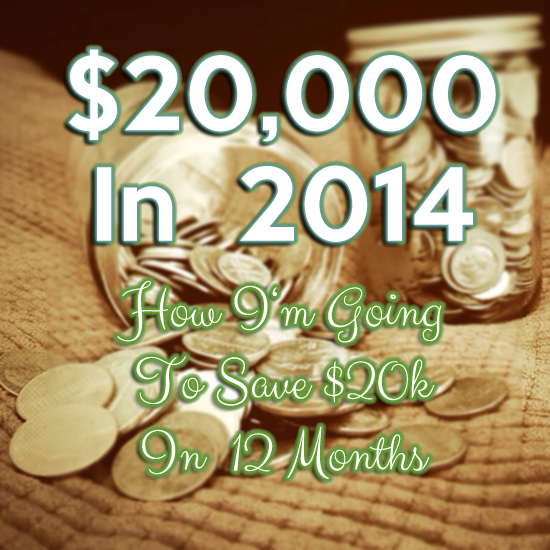 I’m saving $20k in 2014 to pay for a wedding, save up for an emergency fund and (nearly) max out my Roth IRA.  Twice a month, I’ve set up automatic transfers from my main checking account to my CapitalOne 360 account that I use exclusively for my savings goals and it should be an easy process to automagically hit my lofty savings goals.  Operative words being “should be.”

March was an off month.  Just because I blog about saving money and frugality does not make me perfect…or Lord knows, anywhere near it.  Yet despite my blunders, it proves the concept- having an emergency fund is a smart move.  This month, I dipped into my Emergency Fund, nearly wiping it out instead of adding to it because we found out our dog has cancer.  Ralph has been in and out of the veterinary office for well over a year now and the emergency fund has helped me several times while I wait for a paycheck or my blog income to show up to cover the credit card bill.

We didn’t discover he had cancer until the beginning of March despite the warning signs I secretly thought to myself were surely signs of  pet cancer (weight loss, occasional joint pain, more hacking than normal) but since our culture uses Web M.D. to self-diagnose everything from cold toes to ear aches as cancer, I tried not to freak out.

Besides, he had been to the vet 5 times in three months, surely the blood work or chest x-rays would have revealed it. As it turns out, it was easy to misdiagnose even with our frequent vet visits until the third round of antibiotics did nothing to cure his hacking cough, which had been diagnosed as pneumonia, the doctors compared chest Xrays from October, January to March and saw there was an abnormal growth on his lung. Originally, that shadowy thing on his lung was thought to be fluid from pneumonia, in fact, it was was one of two aggressive tumors we would discover later.

So, needless to say, the emergency fund got seriously wiped out this month.

His visit to the Cancer Vet (yes, they have an entire clinic dedicated simply to veterinary oncology since it’s so prevalent) cost us $900 on top of the $700 in other vet bills we’d had for him in February and March.

Treatment for him would cost at least $7,000 and after talking to our vet, it might cause him undue suffering.  Surgery would need to remove a large part of his lung- making life afterwards pretty rough.  Additionally, due to his breathing, sensitivity to medication and age, he may not even survive the procedure.  I struggled with the decision, but after talking to the vet, we made the decision as a family to keep him as comfortable as possible for as long as we can, knowing that fighting two aggressive tumors (maybe more) would most likely not yield positive results or make him feel any better (one lung=not fun for him), we made the hard call to treat him best we could for however long we have left.

Despite the setbacks and sadness this month I’m happy to say  I’m still on track with my weddings savings.

CapitalOne360 has a bit of a lag in reporting, money doesn’t update in the total until it’s cleared the bank a week after transfer.  Since I get paid on the 30th and transfer on the 1st, as of this writing the total hasn’t updated to include the latest payment, but I’m on track overall, huzzah!

I received a wee-bit of blogging side hustle income in March from Google Adsense and GLAM (ad networks) and have some paid projects paying out in April and June.  I also filed my taxes early this year, so I hope my federal tax refund will be here to replenish my emergency fund since it’s almost gone and I’m 6 months behind on my goal.   Yikes.

How To Get Back On Track With…

7 Stupid Easy Ways To Fix Your…