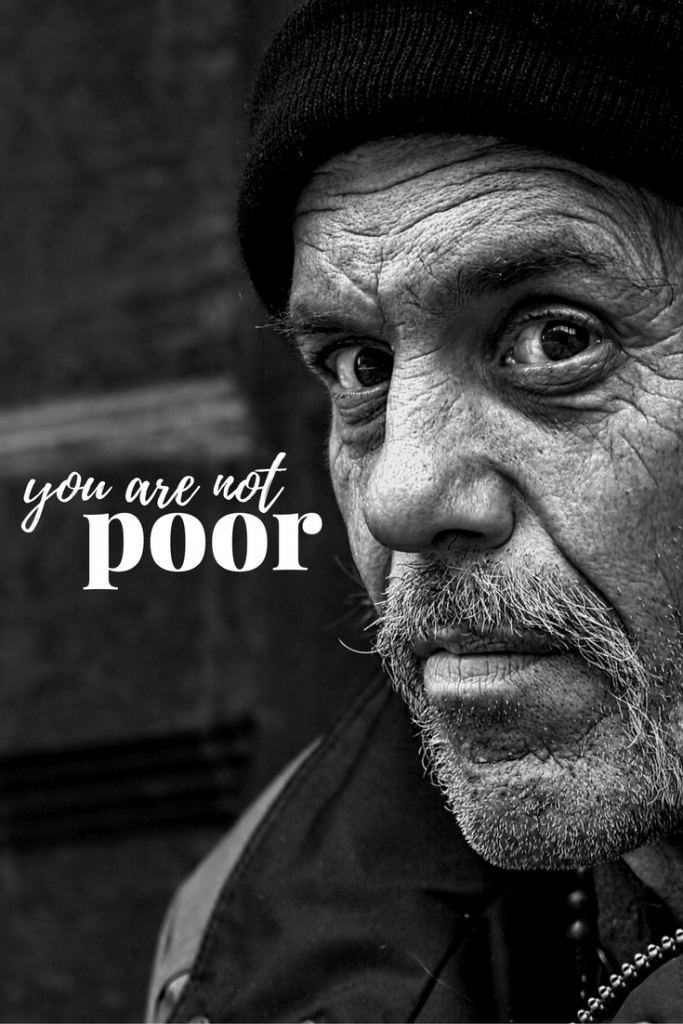 I take serious issue when I’m talking to someone and they drop into the conversation that they’re “poor.”  Unless I’m serving you a dollop of spaghetti from across a food-line counter, chances are honey, you are not really POOR.  Before you lies a world of possibility, you have assets in your corner, even if you’re in debt or barely making ends meet.   Let’s put it in perspective:

A few days ago, I was dropping in to do an interview with a successful female business owner in Chicago, and while I waited for her, I made small talk with her receptionist.  I commented on her very cute retro-style dress that looked almost Anthropologie-esque.  I asked her where she got it, and she replies, “I got it from the thrift store, I’m poor, that’s where I get all of my clothes from.”  I tried not to get annoyed and instead commended her thriftiness and inquired about her crafty sewing skills.  When I left the establishment after the interview- I pondered, why would this near-stranger tell me she was poor?  She works in a boutique, gets paid well above minimum wage, plus a rockin’ employee discount and great staff to work with- so why the “whine?”  She though is not some snob- she’s just like many people in our age group that have normalized the capacity to complain because they’re not able to afford the items in the glossy magazine ads, but who says we’re entitled to?

You, my friend- like me, and many other people out there, are BROKE.  If you have dreams of upward mobility and freedom, you are BROKE, not poor.   Even if you are in debt, stressed, overworked, tired, spread thin and frustrated you can’t buy even simple goodies to indulge, you are broke, not poor.  Being truly poor means you have no freedom, nor do you have access even to the simplest of luxuries (like an impulse donut or a buying a 99¢ song on iTunes).  Being truly poor means that if opportunity knocked, you probably couldn’t open the door.  Being poor means that you have little hope, and even dreams seem far away.  That’s real poverty.

If you want to graduate with a Master’s Degree or to own your own business someday- it’s going to be a struggle, but you can at least meet your basic needs, and have the resources to eventually meet that goal.  If you are drooling over a new Coach bag but are frustrated that you will have to save up for it for a year, that’s not poor, that’s just broke.

You still have the ability to dream, and the means to achieve the dreams- even if it’s a slow process.  The real experience of poverty is the inability to meet basic needs- food, hygiene, healthcare.  Even if you have to use a free clinic to get your birth control, you are close to, but not actually poor.  Those who are really poor have obstacles that even prevent them from accessing free or discounted public services.  They must depend on someone else for everything, which usually means needs are not met.  If you have an education, can speak English and have your health somewhat cared for to a point that you can function, you’ve got one up.

Even if you want to argue with me, I know a woman who I would totally call “poor,” but she doesn’t see it that way:

I have worked for a Mary Kay Director.  A woman joined her unit with little money to invest in inventory, or even regular access to a car.  Other people have joined with at least a little cushion money to spend on the first order to get the “basics” to sell and some samples.  She had almost nothing, and had to get her money for the initial order by pre-selling by showing people catalogs.  She needed the opportunity to make money on a flexible schedule more than anyone-  she needed this opportunity to help care for her sick daughter.  Her daughter was able to fight off cancer, and this woman was able to fit in sales in between watching over her.  But then, the bills started coming in, and this mother of course was worried- it was either pay the medical bills or pay the rent.  What’d she do? She put her brave-woman pants on, put a bunch of lipsticks and lotions in a basket and started knocking on doors in her apartment complex.  She  she sold everything in her inventory from door-to-door sales, IN A BASKET (read: not a car)  and was able to make ends meet.  Did she have to sweat for it?  You better believe it.  But she knew she had an opportunity to get by, that some of her friends who didn’t speak English didn’t have.  Her situation was tough, but we all have to deal with “tough,” do what you can with what you have and be thankful you at least have that.

This isn’t a “pull yourself up from your bootstraps” kind of blog post.  I’m not here to tell you to get over it.  You’re stressed, you’re pushing yourself towards new heights- expect that you will be broke, overworked and sometimes, very, very tired.

It’s too easy to get discouraged and to put ourselves down when we compare our lives to those who “have it made,” but my point is, having a false “attitude of poverty,” will keep you there.  You have the brilliance, the intelligence and the stamina to get what you’re dreaming of, sadly- those who are truly poor don’t have the opportunity to do so.  Use what you’re feeling to motivate you to try harder and do better.  You have less obstacles than those who are truly poor.  It’s a stretch- it’s hard, it’s tiring, but your hole is not nearly as deep to climb out of.

You are not poor, you are broke- trust me, that’s not a bad place to be.

1 Sure-Fire Way to Have a Kick…

Prioritizing Your Joy (and your $$$)

Should Debt Be A Deal Breaker?

7 responses to “You Are NOT Poor: Here’s Why”