New York? Why Not! 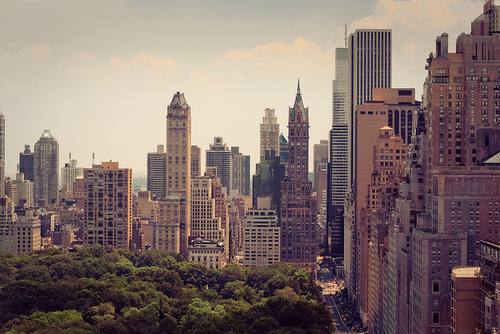 Last week I was in NYC for several days to celebrate the launch of a game-changing new book, The Work Revolution by Julie Clow.  I have gotten to know Julie through the process of the book launch, and both her ideas and her influence in my life have been life changing…but don’t worry, the book review is coming soon!

The last time I was in NYC it was a rough experience.  At 19, I’d never been to a city like that before and found it totally overwhelming- plus I was in a large tourist group, so it wasn’t the intimate exploration of one of the city I’d hoped for.

This time around I fell in love NYC:  Head over red-soled heels in love.

I realize I was in “vacation mode,” not every day can be spent roaming coffee shops & picking out celebratory champagne, but oddly, I felt at home.  I did most of my work from a local coffee shop and spent the days roaming the busy streets of Manhattan.  I felt grounded and excited-  despite the hustle and bustle I was ready to dive in.

Being in New York for those few days was a game changer- it illustrated the big “what ifs” that I’ve been attempting to ignore.  Not only was I hanging out with the amazing Jenny Blake and phenomenal Julie Clow  who are total inspirations, but I was able to maintain my workload from a coffee shop in between roaming the nooks and crannies of Manhattan- a dream come true.  My days were spent hopping from shops to salons to restaurants to the book launch party.   I was in heaven.  Even when I got lost on the crazy streets, I felt I knew exactly where I was going.

I’m at a weird part in my life.  I just launched my own business, Cake Mix Media for social media consulting and I blog.  As of now, my work is location independent.  Additionally, in less than 30 days I will be done with my Master’s Degree.  My lease will be up soon and I have absolutely no plans.

No plans, no defining ties and nothing to hold me back or push me forward except for an infatuation with a city most warn is too tough, too expensive and too crazy busy.  No matter what I choose from this point forward, there’s no returning to what I was a year ago.

When my plane took off, my heart sank with my departure- I knew I had the answer of what my heart would do if it was the only part of the decision process, but alas, there’s more to consider.

So, am I totally insane for wanting to move to NYC?  I’ve been warned it’s like Chicago on crack.  It’s insanely intense, even more so in terms of expense.  But, what if it’s worth it?

I figure I could just go as an experiment…two years tops.  If I hate it, I’ll go somewhere else.  If I fail running my own business, I’ll work at a coffee shop.  I really just don’t have the weird hang-ups I used to.

Trust me, when you fail at your grandiose plan of moving to Chicago- getting a Ph.D. and finding the love of your life…you’re willing to experiment without the fear of failure- one degree and one boyfriend lighter {which makes packing that much easier!}  I finished what I could in Chicago, do I need to stay?

What is tripping me up a bit is the worry that I won’t be able to cut it financially as I build my own business, but I’m willing to make sacrifices.  I’m also worried about the message it sends- my amazing family has always invited me back to the west coast if I should choose to return after grad school ends next month… but part of me feels horrible that I’m sending the message that “Shannyn’s really not coming home.”  I know they’ll be supportive (again, amazing family), but there’s the guilt, the worry and the sadness I’ll miss out on things.   I suppose the only thing I can do is to promise to do well financially so I can make flying home a frequent priority!

I’ve considered several other cities- Seattle, Portland, San Francisco and Dallas.  I think eventually I’d happily settle there to start a family or follow opportunity, but if at this moment the only opportunities I find are the ones I actively create, why not go to New York City?

The move scares me a bit. Finding a neighborhood and a place to rent that’s affordable but conducive to my needs (pug friendly, privacy for recording vlogs, good neighborhood, close to a Trader Joe’s- ya right!).

That being said- the possibilites excite me endlessly.  The people I’ve met thus far are pretty amazing.  Going to a city knowing it will totally kick your ass is oddly enticing.

I could come up with and extensive pro/con list to deliberate if this is the right move…but I just keep hearing again and again the simple truth:  “Why not?”

Please feel free to weigh in… I need your ideas, experiences, rambling thoughts and possibly your pickup truck.  😉

Why I Made Ballsy, Audacious Goals &…

Don’t Apologize For Your {albeit unfrugal} Bliss

PREVIOUS POST
"Go-Green Challenge from Alice.com {Week 3}"
NEXT POST
"The Importance of the Thank You Note"
9 comments so far.