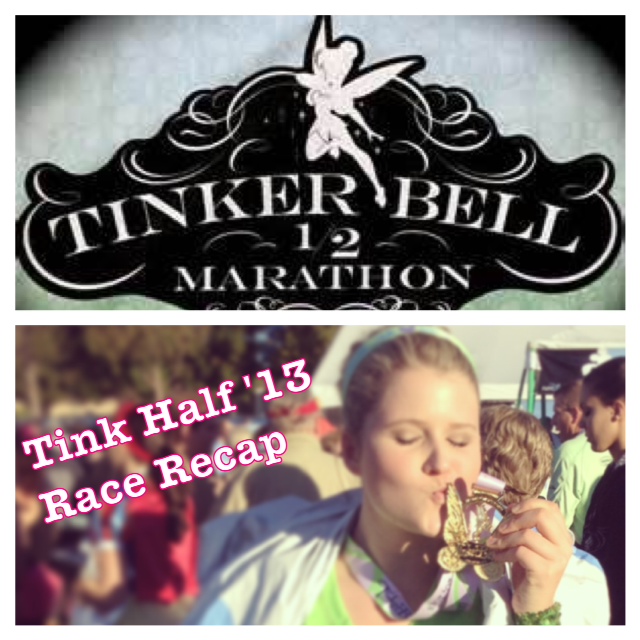 The Tinker Bell Half Marathon 2013 was nothing short of a redefinition of happiness.  If you ever wanted running 13.1 miles to feel like the dream of a giddy 5 year old instead of just “something adults do,” you haven’t known happy running until you do it with runDisney.

If you ever doubted you could experience the elation of completing your first half marathon, let my weezy-asthmatic self tell you that’s it’s possible.  In my journey to run the Tinker Bell Half Marathon 2013, which would be my first half marathon, EVER, I had my doubts, fears and insecurities, but there is no better place to face them down and run your first 13.1 than the “Happiest Place On Earth!”

My race costume consisted of my Mizuno Wave Runners, Team Sparkle Wings & Skirt, Pro Compression Socks in lime green, and the official Tinker Bell Half Marathon 2013 Sweaty Band I snagged at the expo.. oh yes, and sparkles for my arms and pom poms on my shoes- of course. According to Kelly had a great tutorial on running in wings and I used Pinterest to figure out an easy peezy sock bun! 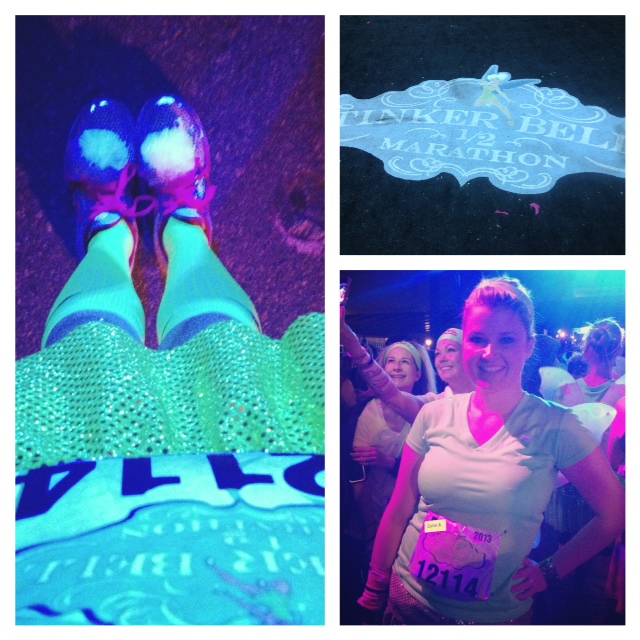 Though I didn’t get a million hours of sleep before the race, as I’d have liked (you know, because I’m a total grandma) I felt well rested and ready to go- I had a feeling I’d be running on excitement and adrenaline, but right after my cousin affixed my wings, I was running on pixie dust!  Lining up at the corrals was so exciting- I was also glad I got my corral switched to B instead of E during the expo because I was full of pep and ready to run that thing!

Sean Astin (please see my Tink Half Meetup post for my story on him) made an appearance, then TinkerBell herself did, and we were off and running!  I was so happy I realized I am asthmatic- using my inhaler an hour beforehand (not just 20 minutes) made a world of difference.. I ran the first 3 miles without any breathing problems, then refreshed and did once more at mile 8.  I am not sure if I should have used the inhaler that much, but I felt I needed it.  Having an inhaler turned my running experience around! Though I did have to walk a bit at parts, it was never because I was gasping for air, it was more of a matter of fatigue or managing my breath when I was on the verge of being huffy puffy.  It was amazing being able be breathe! 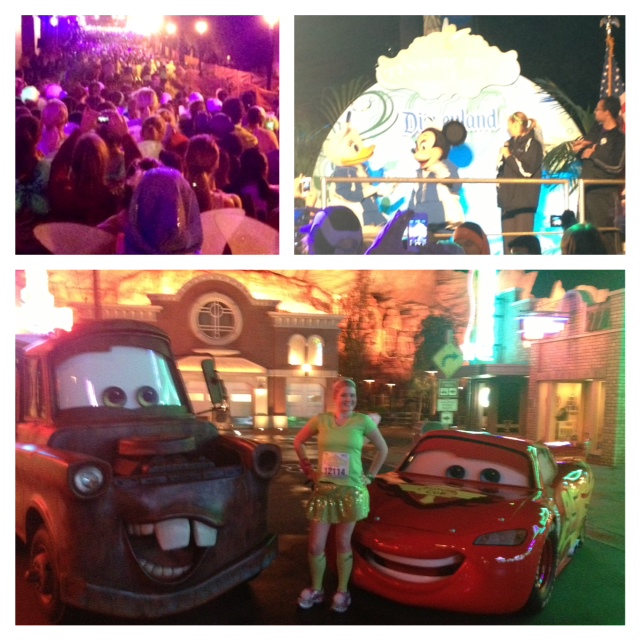 Of course, with all runDisney races, you will have the chance to stop and take pictures with an array of characters and plenty of cool landmarks.  By far, the spot that brings me the most joy is California Adventure’s Cars Land.  I’m a Route 66 fangirl and I knew I had to stop here for a picture!  If you haven’t seen Cars Land at night- do yourself a favor and stop by, it’s gorgeous!

There were plenty of other characters to pose with later- Cinderella, Jack Sparrow, Mary Poppins, Monsters Inc. and Merida just to name a few- but Cars Land was the only spot I stopped and waited in line for a picture… nothing makes my heart swoon like Route 66 so I knew if I were to take a moment to soak it in instead of just running during my first half marathon, this was going to be it!

Running the Tinker Bell Half Marathon wasn’t like a normal race- it was so exciting and filled with fun things to look at, you’d almost forget you were running a race, which, ahem, can sometimes be the most unfun, adult thing to do- even for those of us who love to run.  I usually am always so “in my head” when I run that it’s sometimes boring to run long distances- not the case with runDisney- it was by far one of the most fun experiences I’ve had ever, not just limited to running!  Sure, there were parts around mile 7 where I got tired, but overall, it was so much fun the fear and worry I’d had about running my first half marathon completely disappeared- I would highly recommend runDisney events for any first timers. 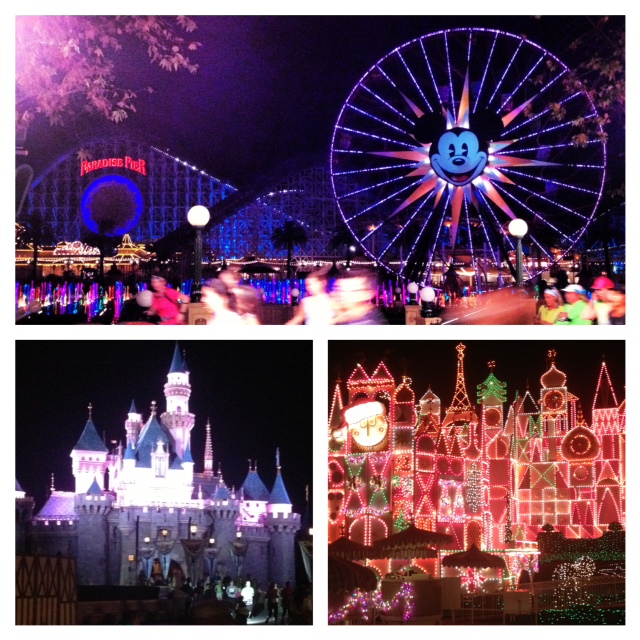 Running through the parks was gorgeous- it was probably more of a dream than a race!  The first 6 miles of the course were really great and mainly in the parks, the later half was a bit less fun since we were running through the streets of Anaheim, but there were plenty of spectators and high school marching bands (even some Michael Jackson impersonators) to keep the miles entertaining and provide some music.  I didn’t take pictures at that point, I was in the zone. 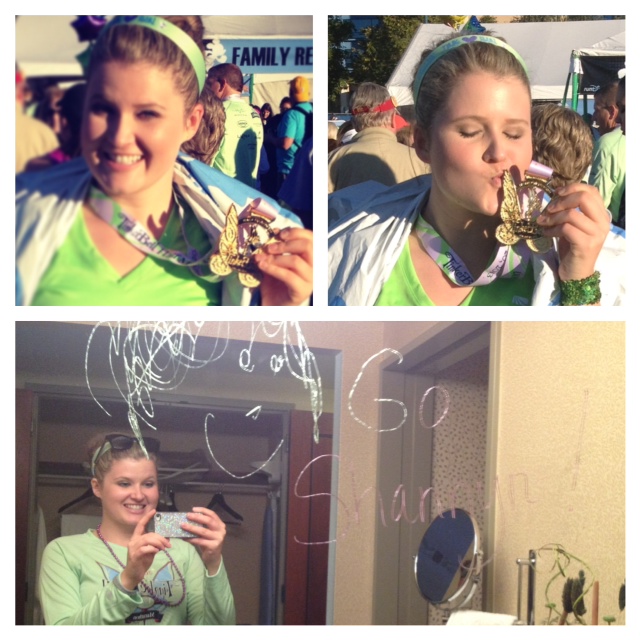 After the race, I got back to the Grand Californian to shower and was greeted by a surprise from my five year old cousin and her parents-  Well Jennah said it was from her, but I don’t think she’s that tall, and dang her hand writing improved fast!  Having my family with me for my first half marathon was such a blessing, their moral support and my cousin’s technical skills making pom poms and affixing pixie wings to my back are unparalleled.  Plus, they kindly got my medal engraved, thanks guys! 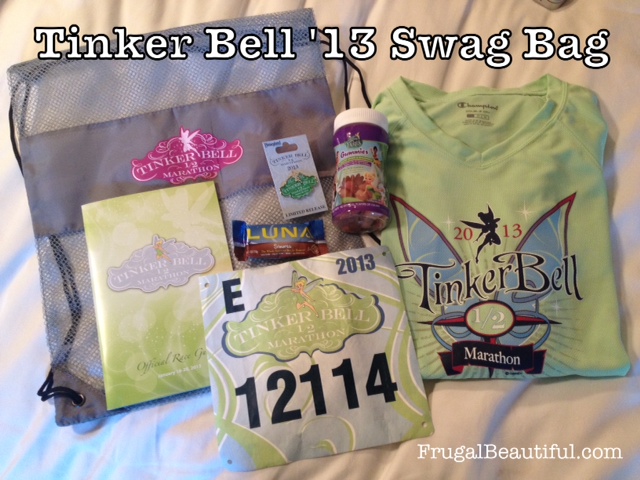 I’m not a huge fan of the mint green- I prefer neon-in-your-face craziness, but the overall look/feel of the race is pastel now, so that is that! It’s long sleeved so that’s a plus- when you start running races, you get a lot of short sleeves! I loved that runDisney gives you a commemorative pin and a nice drawstring bag to hold things in.

Overall- the Tinker Bell Half Marathon was great.  The race is what you would expect and more from a Disney event, you get a quality event and lots of fun surprises.  There were 14,000 runners, mainly women, and for such a large race, it was well coordinated and I didn’t feel claustrophobic on the course like some races. While there are plenty on the course with you, you have room to breathe!

Additionally, there were water stations every few miles and plenty of aid stations- you can bring your own water if you like, but this was by far the most hydrated race I’ve done!  I was very, very pleased with the quality and coordination of this race- it was pleasurable and fun the whole way through (even if my sore legs beg to differ) and runDisney did a great job of making the Tinker Bell Half Marathon memorable! 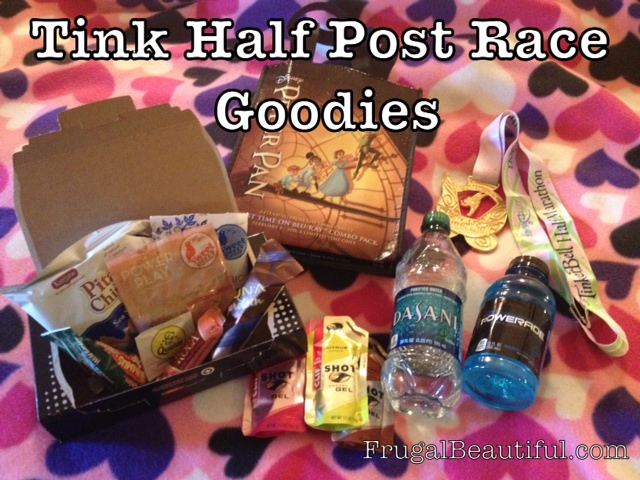 During the race, we were able to grab some Clif Shots Gels- I’m sure we were only supposed to grab one, but since everyone kept handing them to me and I was a bit delusional around 8 miles in, I ended up grabbing a few. (I mean, gosh, there were like 4 different flavors, and when someone said, “THIS ONE HAS CAFFEINE,” I was more enticed than courteous, ahem).

Post race, every runner was given a bottle of water, Powerade, banana and runDisney snack box with goodies inside after the race.  We also got runDisney mylar blankets to bundle with and a Peter Pan bag to hold it all in.  After you run through the finish line and get your goodies, you will also have the option to order medal frames and have your medal engraved with your name and time right on the spot for about $20. 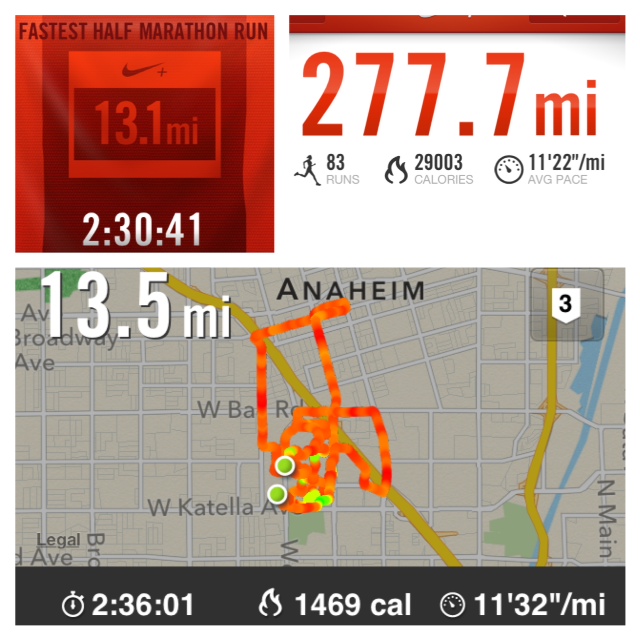 If anyone’s curious, I take a lot of outside turns, so that added .4 to the overall race.  I also finished my 13.1 in my target time, 2:30 – huzzah!  I did stop my timer during the potty break and picture break, so my official time with Disney is 2:40, but ahem, I only count the running of the race not the running to the bathroom.

So, there it is! From 0 to 13.1 in six months… the journey to the Tinker Bell Half Marathon 2013 changed my life.  From a girl who laughed at runners, to a girl who ran and laughed through the whole thing, this was a magical experience- from training on day 1, to feeling that medal hang around my neck!

Huge thanks to everyone who made this dream a possibility.

My first half marathon was amazing and I feel so blessed to share it with you here on my little blog.

Wish you all many happy miles!

Disclosure: I purchased my ticket for the Tink ages ago, but recently was invited to attend the Tinker Bell Half Marathon weekend as a media guest.  My hotel and park tickets were provided by runDisney, but I assure you, opinions are 100% mine and my exuberance and enthusiastic review are were no way influenced by a third party, my giddyness for runDisney  is all me!

That being said- expect some “budget friendly” posts from me soon.  If you want to do Disney on any budget, I will have some tips on how I saved up, planned ahead and made a trip to Disneyland work for my budget, before my media invite 🙂

28 responses to “The Tinker Bell Half Marathon 2013 Race Recap”