Packing Up: What I’ve Learned From My Two Years In Chicago 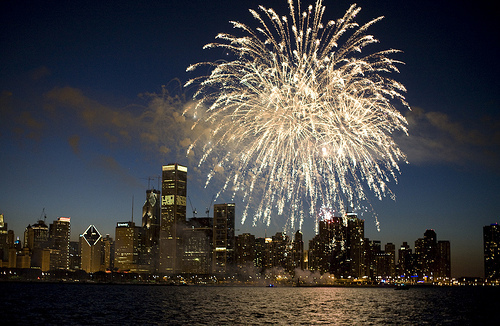 Some of what I’ve learned… Chicagoans get to enjoy free fireworks every week in summer that are shot off Navy Pier.  Sell your car if you’re low on cash, the public transportation is uber frugal.  Invest in a good pair of Sorels and long underwear for winter.  Check out Millenium Park for free shows in the summer.  Go to Hot Doug’s on a Saturday for duck fat fries and the best hot dogs you’ve ever tasted.  Be extra kind to CTA employees, it will pay in good karma on other occasions.  On the EL train, you’ll never know the source of the bad smell until you sit down next to it.  Don’t pay to go to the observation deck in the Hancock, go the Signature room and order a drink for the same view and better experience.

I’m packing my things up and moving to California in just a few days, ahh!”As I put on Doctor Who and Space Bag all my clothes, I thought it was a good time to reflect, be thankful and share my experience.  Now for the bigger things I’ve learned…

Even when things are at their worst or you feel stupid, it’s best to laugh. Chalk it up to priceless experience.

When you’re embarking on something new- whether it be graduate school, moving to a new city, getting married or planning for a baby, you can try and account for even the smallest details.  You can read books, ask for advice and Google til the cows come home- but truly, you don’t know what you don’t know.

I knew when I moved out to Chicago, that even with the best research there would be problems that simple “inexperience” would   have to account for.   For instance, when I moved out here, I had no idea my apartment would be on the fourth floor with no air conditioning.  After buying my Ikea furniture, I had no idea if it would all fit in the car.  I had no idea how long it would take to find a job, and I sure didn’t know that graduate school would be the biggest waste of life/time/money ever.

There were times my own ignorance or circumstance was so idiotic that you just had to laugh.  If you don’t laugh you’ll cry- and even if you cry, the best thing to do is to end up laughing.  We learn our best by failing fast, getting our hands dirty and sometimes, flying blind.  You don’t live and learn by researching what “could” happen on Google, you accomplish great things by getting out there and taking responsibility for even some of your less-than-ideal choices.  Have fun!

Take your bad experiences as “dues paid,” and refuse to get stuck.

I lived in California my whole life, moving to the Windy City for grad school was a challenge on every level.  I remember waking up to 0 degree temperatures for the first time in my life, I had to laugh.  A few weeks later, a record breaking blizzard hit, shutting the entire city down except for my work.  At 5am, I walked through hip-high snow to work that had no right being open, which turned out to be a 14 hour shift.

I worked a less than ideal job as long as I had to, then I got out.  My goal was to graduate with my master’s degree with as little debt as possible, and so I did just that.  It wasn’t easy, it wasn’t fun.  I was scared to quit that job and run my blog/consulting full time, but when I did I knew there was no turning back. Sometimes working a job that totally sucks is simply means to motivate you to do better.  Take a bad situation as a lesson-  even if you fail trying something new, nothing could be worse than where you started!

I caught up with a friend of mine who came to Chicago from California the same time as I did for medical school.  We had a good laugh about how frustrating it is to go on a date and explain that schooling is the most boring priority ever.  Most grad, law and med students are usually broke, stressed and strapped for time- it’s rare to find a partner that gets it. If I could tell myself not to bother hitting the dating scene while working to pay the bills and studying full time, I would.

Beyond that, I spent way too much time with guys that weren’t after what I was after.  I’m not necessarily looking for marriage, but I’m looking for a partner.  Far too many guys are too casual for my tastes, or something along the lines of “free milk.”  I’m not a cow, and I don’t give out free milk, sorry fellas.  I have learned in the last two years, if a guy isn’t looking for love & respect, don’t even bother.  You don’t always set out for love when you begin dating, but if there’s no chance it would happen- don’t waste your time.

Some of your best friends and best memories start out as random strangers and very random coincidences.

Living in the city is like a swirling social cauldron of serendipitous meetings and chance encounters that could change your life.  In my first month in the city, a young lady saw that I was trying to read the train map and looked a bit lost.  I was on my way to a first date, she was on her way home after a rough day at work that ended in her termination.  We exchanged numbers on a whim and she ended up being one of the coolest people I met in Chicago.  In our motley crew, we went around the city on a costumed scavenger hunt, drank wine and listened to free concerts in Millenium Park and had sunset picnics.

Fast forward nearly two years later, and the same thing happened to me during a beer tasting event I went to on a whim. I saw a guy sitting by himself, said hello and started talking.  That random encounter became a special connection which spawned my love of running, some of my favorite summer memories and more inside jokes than I can share in this post.  Good things happen when people take chances, and if it doesn’t turn out to be a love connection or friendship, it’s a hilarious story waiting to be told!

I can’t believe it’s been two years since I arrived and while I wish that sometimes the experience could have been different, it was my experience.  I lived month to month on less money than I thought possible, made the most of it and got my master’s degree.  I adopted a fabulous pug, Ralph and made numerous friends that have made it all worthwhile.

My last piece of advice- if your gut is telling you to go on an adventure, go.  You never know if you’ll end up where you intended to go, but it’s worth the journey.

Relocation 101: Tech Tools of the Trade

11 responses to “Packing Up: What I’ve Learned From My Two Years In Chicago”