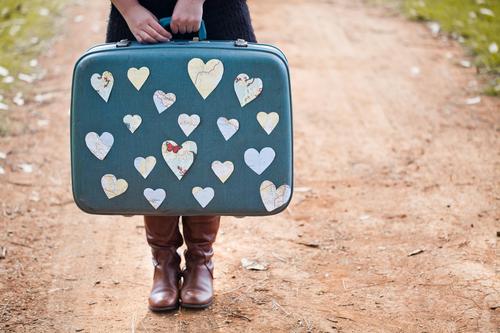 This week marks the end of July & a transition into August- so that means it’s time to mozey on out of Chicago, tie up loose ends with the landlady and secure the rental car!  I’ve already shown the apartment to a few nice lasses to take over my room and buy my furniture, but oh, so much to do!

I wish there was a class offered in college on how to wrangle a cross-country-move without losing your head.  Luckily for me, just two years ago I made the trek from California to Chi-city in a little Toyota hatchback with nothing but a long time friend, a ton of my crap and a roof rack bag!  Ah yes, I think I may be able to do this again, only this time, I have a pug in tow! 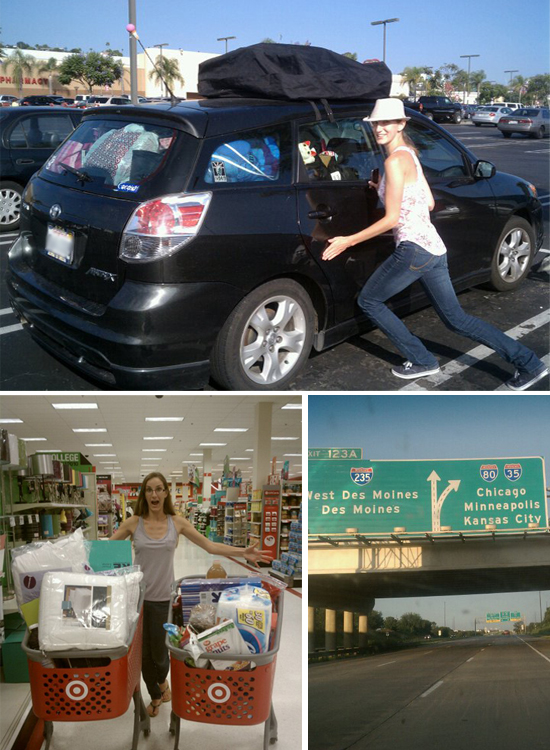 I’m a bit nervous about renting a car this time around- I sold the Toyota Matrix…actually, scratch that.  I drove the damn thing all the way back to California a few months after the trip out here to give it to my dad, thinking he could use it.  After Christmas break concluded he drove me back to the airport and traded it in ON THE WAY HOME FOR AN SUV.  Apparently, my gift wasn’t manly enough for him…oh well, better than it collecting rust here in Chicago (to be honest, it wasn’t much of a blizzard friendly vehicle and I took the train to work to avoid $18 a day parking rates.)

I’m now wondering, as I look into rental cars, if I should try and cram everything I can into a small sedan w/ roof rack (that I can get on Amazon for around $40 or if I should try and rent an SUV so the pug and I are comfy, and I don’t have to unload/load the roof rack every time I stop for the night?  It’s a price difference of about $300 so I’m really not sure how much a sedan holds…but I hope I can make it work.  That is, if the roof rag bag doesn’t rip open mid-drive like it did last time!

So my question is- what is the roomiest sedan to cram your cr*p in that you can rent? I NEED space for my stuff and the pug.  Oh, and me too I guess.

As much as I don’t want to alert potential stalkers out there that yes, I will be driving alone.   I do warn you that I will be well equipped with things to fight off attackers.  Mainly cooking pots and a pug that I may or may not arm as an attack dog when he isn’t napping. Well, that is if stalkers can even catch me.  I drive like I’m qualifying for NASCAR & I don’t sleep, like ever.

So, basically, if something doesn’t fit in the car, that’s it, it’s staying behind.  I’ve tried to be as careful as possible and donated about 6 bags of stuff (only to do some shopping afterwards that nearly nullified that progress, but oh well) but one thing I’ve learned from my stints of nomadism, you always have more junk than you think.  Seriously.

At this moment, I have about 4 decent sized tuppers, 3 boxes and some under bed storage stuff that I know will fit for certain.   Other than that though?  I have not a clue what’s going to make it, isn’t that exciting?

I’m selling off all my furniture, donated a slew of books and downsized as much as I could handle.  I still have a lot of stuff though- pictures, trinkets, and more nail polish than one single female that isn’t running a beauty salon should own.  To be honest, I know it will be fine, it’s always fine,  but I am a bit anxious writing this because I have no idea what car to rent  and I feel like I’ve downsized as much as I could at this point.

To be truthful though, I have the packing skills of a Tetris Wizard and I know about all the secret nooks and crannies one car can hold (thanks to years of being shuffled between divorced parents) and can squeeze things beneath the seats, in the arm rests, between the seats if need be.  The problem is, I don’t have a lot of time to pack and I will be loading my car in an alleyway….so I’m going to have to prove my skills this time around.

So, any advice for someone sedan-ing it across country? Should I just fork over the extra money and get an SUV?

Any ideas on how to score a deal on one-way rental cars?

Open Up Your Gifts…

PREVIOUS POST
"Training For My First Half-Marathon: It Ain’t Frugal, But The Medals Are Beautiful!"
NEXT POST
"August Bloom Ambassador Review (Part 1)"
12 comments so far.

12 responses to “Oh, Didn’t I Mention I’m Moving? From Chicago To California, Actually.”