On Love, Loss, Breakups & Divorce. A Personal Letter After Calling Off A Wedding 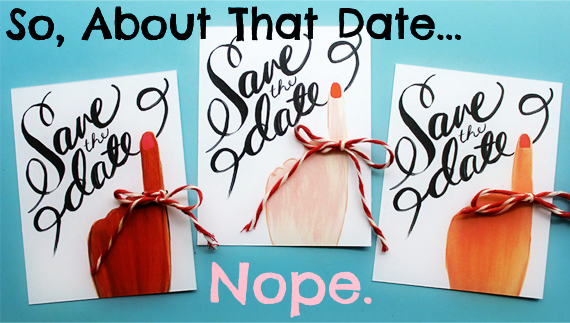 I stumbled upon an article after seeing it mentioned on George Takei’s Facebook page (which I tell you, is a treasure trove of both hilarious and heartwarming posts which is worth giving a “like” to.) and upon reading it, I was moved to tears.  The post was titled, “An Open Letter to My Ex-Husband’s New Girlfriend.”  To sum it up, a woman writes about her offering of inclusiveness to the new member of the family, her ex hubbys new lady, as a mother of the sons they will share.  Elegantly written, and with much grace, she explains her desire to embrace a blended family, and to band together to support their teenage sons.  Despite what could be a tense situation, she implored the new girlfriend to that both she and her ex-husband would overcome any old memories, strains or awkwardness in order to work together for a blended family, not just “his” and “mine.”  Truly, not the typical mindset you think of when you imagine an open letter from an ex-wife!

Though I only called off an engagement a few months ago, not a divorce, I felt her sentiments hit the nail on the head so perfectly. As a child of divorce myself, there are aspects of her letter that resonated with me.  My parent’s divorce was absolutely necessary, but their relationship remained totally dysfunctional and it left an indelible impression on me that perhaps influenced my decision to call off the engagement years later.

Simply put, when you’ve seen ugly divorces, you do your best to avoid one yourself.  Though we didn’t make it to the divorce stage, this was a preventative measure- and honestly, breaking off a wedding can mean justas many odd entanglements. We are all living in a world of blended families, where honestly, resentment, with or without children, serves no purpose.

When we called off the engagement, people were sometimes shocked that both my ex and myself weren’t very dramatic about it.  Here is the only thing I said on Facebook about the entire matter (and yes, it was totally weird figuring out how to word something like that, but you do your best to get the point across.)

Hi everyone, I have been getting messages and inquiries about how wedding planning is going (as some of you have to start planning your travel or are just curious to see what we’re up to), so I wanted to let everyone know that Chris and I have decided not to move forward with the wedding.

We appreciate your respect during this time as we don’t feel like discussing the matter publicly (and honestly, we probably won’t be discussing it via private message either, there really isn’t much to say at this point, sorry not sorry).

We do hope to remain friends and since there is no bad blood between the two of us, we also hope that our mutual family and friends will also hold themselves to that standard. Ain’t nobody got time for weridness, so let’s be cool. Thanks all.

At times, mutual friends attempted to cope with a very odd situation by imposing drama upon it. Surely, they thought, we had to hate each other. Surely, the other person was entirely to blame or needed to be associated with some negative epitaph to have caused this to happen.  Surely, in the minds of some, this must be so- people are either heroes or villains, but honestly, this time it wasn’t, and we weren’t. 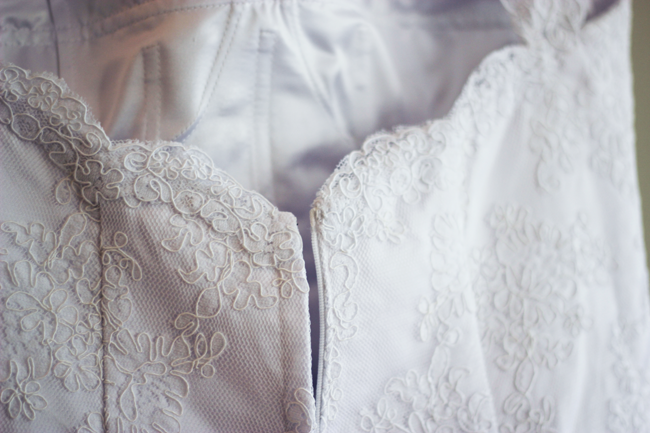 The wedding dress that was not meant to be.

For those of us without kids, we may not feel the need to be bigger people and maintain good relationships with our exes (married or otherwise), but I have always felt differently. Not only did I see how ugly things could be when two people split and continue to harbor hurt and resentment for decades after the fact (which I honestly attribute that attitude to contributing to my mom’s poor health and drinking that lead to her death a year ago), but let’s be real here- we live in the digital age, we are all connected.

Chances are, even if you want to be a jerk and hate each other, even in a big city like Chicago, I am still connect to my ex and we still run in the same circles.  We have two furry pug children together and we share many of the same friends and some of the same interests. It’s not only the right thing to do, to be kind and cooperative with one another, it was also the smart thing to do- although, at times, it was tremendously difficult (and perhaps that’s why some people don’t even bother.) 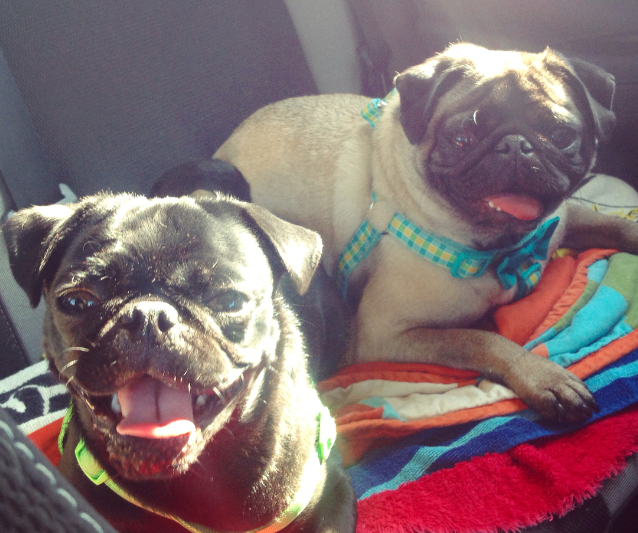 Matilda & Max. Our furchildren that we pug sit for each other now.

When my ex and I separated last fall, we had already committed to doing the Virtual Pug Run Fundraiser– the totals were nearly in and the medals had ben ordered. If we hit our fundraising goal, he had told everyone (ahem, so had I, as we had $7,860 to raise!) he’d run the Chicago Marathon in a pug wrestling singlet. Many times, we both wanted to run and hide, while pretending that the pug fundraiser wasn’t happening- but it was.

He had committed to running the Chicago Marathon in a pug singlet if we hit our goal, and I knew that I would need to be there to grab photos to thank our supporters and to cheer him on. He had been training for months, and I had been working round the clock to get the fundraiser together. He had never done a marathon, I had never tried to raise $8k in 30 days and we both recognized that despite our broken hearts, on an individual level- these were big things for us and we needed to support each other one last time and see this through.

That day, I gathered a group of our mutual friends at the 13.1 mile marker with signs and afterwards, I corraled my ex home, ran him a bath and got him pizza.  I then returned to our group of friends afterwards, went to the bar, had some scotch and watched as they left, without me, to go hang out with him (and apparently everyone being puzzled by the situation, didn’t invite me- ya, that stung but it was a weird day).

I did my duty, my job was done- we had both followed through with our obligations. At any time during this whole ordeal, he could have opted NOT to run the marathon in a pug singlet.  Looking back, I wouldn’t have blamed either one of us for giving up, hiding from everyone or taking some time to lick our wounds, but we both handled it like adults.    All in all, we’re both good people- I just know that we wouldn’t have been good married people, to each other.

It hurt like hell, but honestly, I’m glad we were brave enough to do what was right, and especially so, to always try and do what was kind.

After the day was done, I went home- which at the time was a friend’s air mattress in a guest bedroom, and cried a year’s worth of tears for a good two hours. Yes, friends, being “bigger,” during a breakup is hard work, but in a connected world- we must fulfill our obligations, do what is right, and sincerely and wholeheartedly insist on caring for one another- especially when it is difficult to do so. Also, it’s totally okay if you need to drink scotch and proceed to cry on an air mattress.  That’s also totally okay. 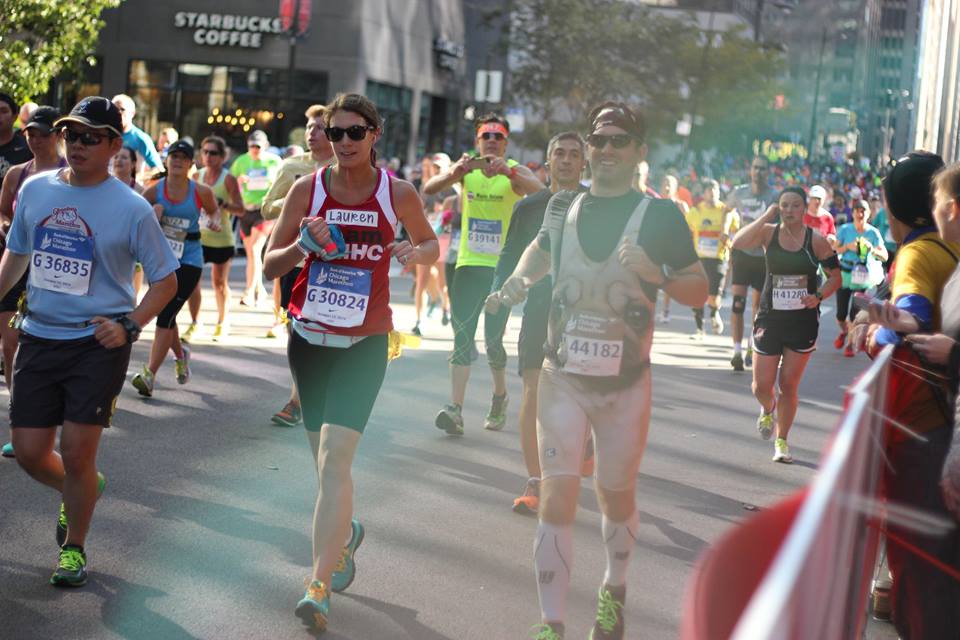 My ex running the marathon in a pug singlet as promised post-breakup. Handled it like a champ.

I’m wondering if someone will read this in the future, after Googling “Should I call off my engagement?” much like I did months ago. I was terrified I would be vilified, destroyed, sullied.  While at first, people attempted to do all of those things on our behalf towards the other- none of it stuck.  If you’re ending a relationship, calling off an engagement or facing divorce- it is not an easy time. I assure you though, be classy about it and you will thank yourself for it later.

Find the high road, and take it.  Sometimes people won’t join you for the journey, but sometimes they’ll come around later.  After reading this woman’s letter to her ex husband, so much of it resonated with me, even though I hadn’t been through a divorce with children myself.  Honestly, many times we have to face a very personal hurt in a very public way- our friends, family and colleagues are watching,and they take clues on how they should act based on our behavior.

I have learned that people are just trying to make sense of breakups, divorces and endings- and they’re struggling with it, just as we are.  As the author said, people asked her if sitting with her ex is weird.  Friends of ours have asked us the same question many times- “is it weird to be hanging out with your ex?”  and we’ve both responded “It’s weird but not weird.”  That’s how life is- it’s weird, but really, not that weird.   Life is short, and life is hard- what’s weird is when don’t realize what a battle it is simply to be alive, and instead, choose to battle amongst each other.

Life is much easier when you are amongst friends- weird as it may be at first. 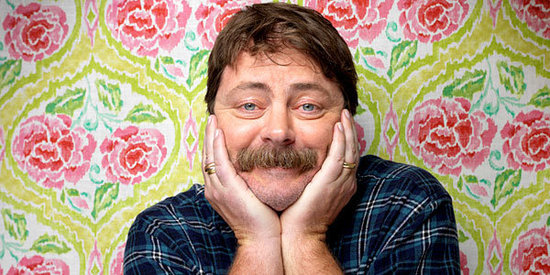 “Its better to have 8 guys with one beer each, than to have 8 beers to yourself”

There you have it. This world is tough, and we need as much help as we can find to get through it. Whenever possible, and a relationship can be saved (unless a partner was a real jerk), it’s better to have more friends than less friends. Truly, I’d rather have 8 people with one beer a piece, than all 8 beers to myself…even if that beer is being shared with a guy I thought I would be sharing a life with, but will not be. We have to stick together, and whenever possible, be brave, be kind, and do the “weird” thing and be friends.

Love & Money: How to Merge Your…

Why I Would Not Recommend EHarmony To…

Should Debt Be A Deal Breaker?

Love and Money: Are You Training People…

PREVIOUS POST
"Stretch. Everyday. #JustBeFlexible"
NEXT POST
"How To Ask For A Raise…And Get It!"
28 comments so far.

28 responses to “On Love, Loss, Breakups & Divorce. A Personal Letter After Calling Off A Wedding”