Life Lessons I Learned By Being A Broke Graduate Student

Two years ago, I started this blog as a broke graduate student on the north side of Chicago. I was living off of $800 a month and I was on a steep, steep learning curve.

It was a year of firsts for me- my first time living in a new part of the country, with of course, a first real winter, first time living with roomies I’d met on Craigslist.  It was my first time having high expenses in a very pricey city, with no money, no graduate school funding and a budget so tight I thought it might suck the fun out of my life forever.

I had no money, no car, no air conditioning, no elevator on the fourth floor and of course, no connections in the new city I called home, Chicago.  For awhile, I struggled to find the joy in it all. Once the newness of the experience wore off, I struggled.  Living on a very limited budget, far away from family and friends or familiar places challenged me in every aspect of my life. 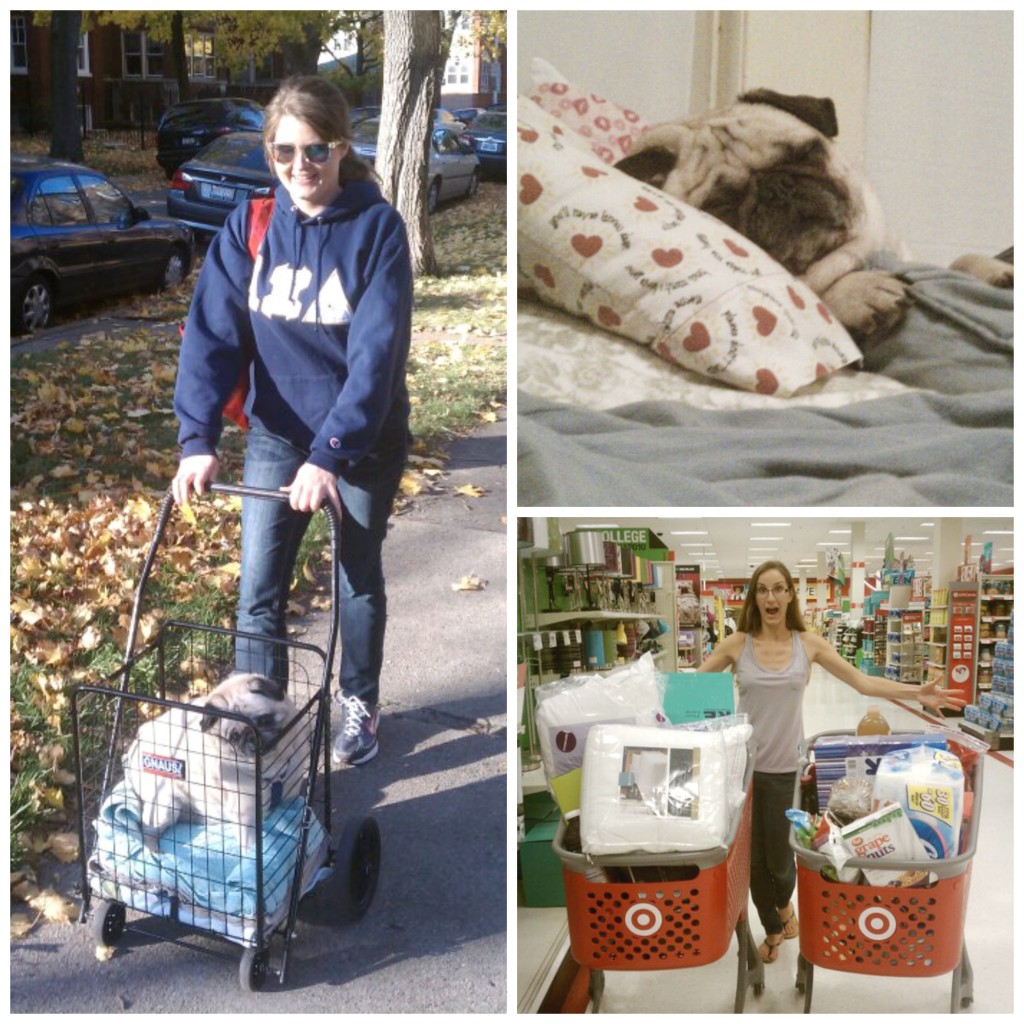 Pictured:  As a grad student, all I had with me was what could fit in my hatchback Toyota which I later sold.  I had to start from scratch- which meant a very expensive Target run just to get bedding, food & toiletries.  So, if Ralph needed to see the vet and couldn’t walk the half mile, I would push him in a cart.  We got stopped a lot since he was adorable.

Ralph, much like the shoes I’ll talk about later, was probably a very frivolous acquisition as a broke grad student, but I don’t regret it for a minute.  Even when you’re broke, your heart knows what it wants, and you’ll make room in your life for your priorities.

They say, that it takes heat and pressure over a long period of time to make a lump of coal into a diamond.  Also true is that it takes the agitation of a piece of sand for a clam to make a diamond.  I consider those two years to be my diamond and pearl years-  I got tough as diamonds and picked up a few pearls of wisdom.

When you live on a tight budget you to learn to be happy with what you have while you save for what you want.

One of the things I struggled with most was learning to be happy with what I had while I saved for what I wanted.  Learning how to find the joy in the struggle instead of merely suffering was one of the greatest lessons I took away from two years of extreme budget living while in graduate school. Learning to tell yourself that sacrifice is temporary for the greater good is one thing, but to allow yourself to celebrate, to slip up, to be joyful and to embrace that you’re in this chapter and appreciate it for what it is will be one of the greatest gifts you can give yourself.

When you’re living on a tight budget as a young adult just starting out, the craziest dreams are the ones that keep you going.

Within a few months of my new graduate program, I was miserable.  I realized very quickly, that going on to get my Ph.D. and working as a college professor was not the life I wanted.  I arrived at my new school to realize that the politics of smaller, private schools started to kill my passion for sociology and that I didn’t want to spend my time locked away in the ivory tower of academia.  I scrambled, and struggled, for well over a year to figure out what to do next.

Around that time, I started a blog, this blog, and realized that the things I loved about sociology weren’t for naught- but perhaps I could redirect my passion for analytics, social learning and community building from my field in a new way.  I began to get into social media and started building a small business to help pay my bills.  Instead of dropping out of the program, which would have been a relief, I knew I couldn’t put “half a master’s degree” on my resume and needed to finish.

I developed a crazy dream- if I could build my blog & business to a point it helped pay my bills, and I finished my master’s program, I just saw myself, walking across the stage to collect my diploma in a fancy pair of shoes.  In fact, the vision was so vivid, it was a pair of red soles I saw peeking out from beneath my feet as I accepted my diploma.  A pair of Christian LouBoutins cost about what I was making at the time per month- it was ludicrous to think I would be able to afford a pair, but I got to work. 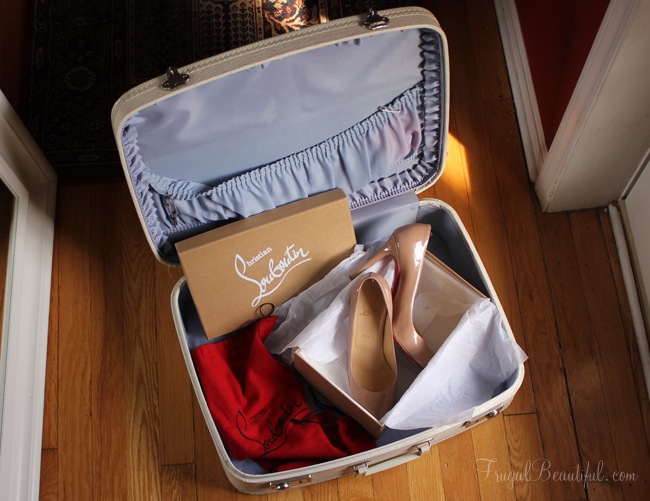 The day I saved up to buy these shoes was a special one- but the journey to get there was far better.

There isn’t a lot I can say that I took away from that time financially- I was a very, very broke graduate student who sometimes sustained herself on rice and beans for a few days at a time just to pay rent & save $20 a month for a crazy, totally frivolous, but motivating dream. I saved for well over a year so I could have a pair of red soles to wear at my graduation, but the memory I cherish just as much as the feeling of those special shoes on my feet as I accepted my degree was the work I put into earning them and paying for them in cash after saving for over a year and landing my first big social media client.

When I stopped feeling frustrated that other bloggers seemed to have closets full of fancy shoes and I did not, I learned the hard way to stop playing the comparison game. I simply reveled in the fact that I got my own, my own way- it was a joy I’ll never forget. 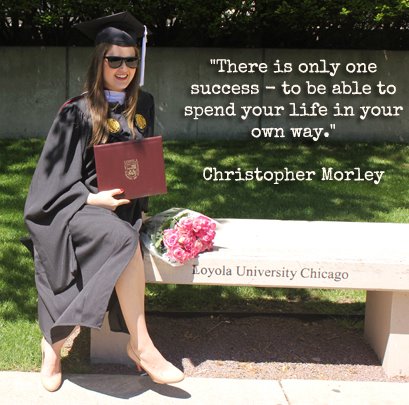 I don’t have a lot to show for that time financially, I got by each month by the skin of my teeth- but what I did learn was priceless.  Even if I graduated with debt to payoff and worthless thrift store and IKEA furniture, I left that period of my life with the knowledge that there is a true difference between being broke and being poor.

Being broke is an odd blessing, it means you’re working through a rough patch. Being broke is a time of sacrifice you experience while you work towards better things.  True, poverty though, is something I hope to help fight for others now that I’m past the point of being broke.  Being broke taught me the difference. 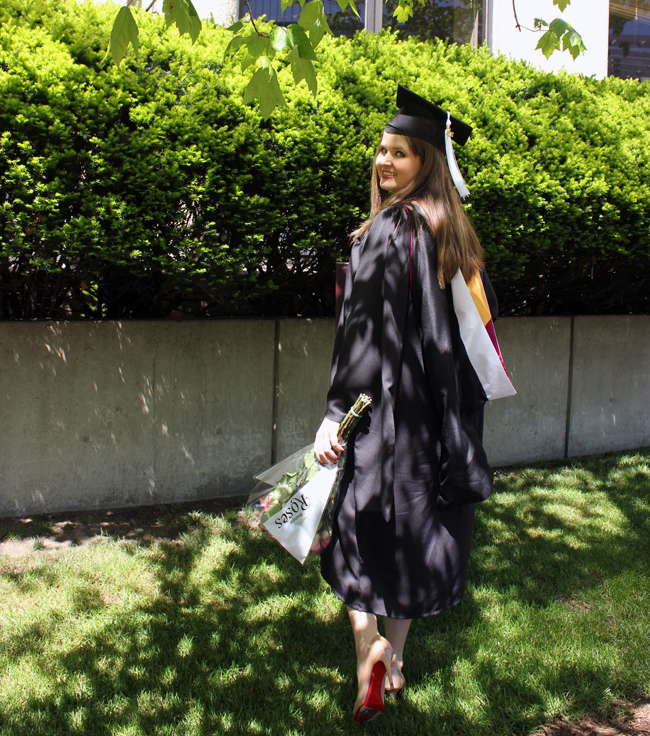 Graduating with the most expensive pair of shoes I’ll ever own.

I learned to count your blessings and found resolve in the fact that nothing in life, especially the sucky parts of it, are forever. I was fortunate enough to have the support of family and friends who kept my spirits up and sent care packages, and a degree that would help me find a better paying job…eventually that is.

Mainly, I learned that you will waste your life if you can’t enjoy the state you’re in while fretting over the next one.  You’ll be in a better state of life soon enough, and the last one, will be hilarious looking back.  Take it from me…memories become diamonds and pearls.

Disclosure: Compensation was provided by State Farm via Mode Media. The opinions expressed herein are those of the author and are not indicative of the opinions or positions of State Farm.