Home Is Wherever I’m With You: Our Engagement Photo Session 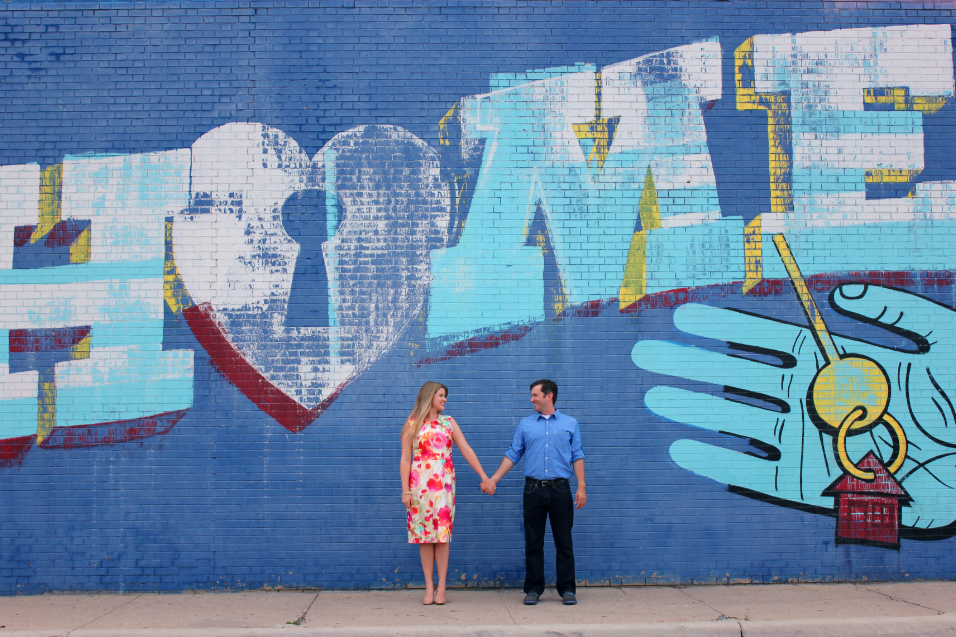 Each wedding is a unique little snowflake when it comes to what you want to spend money on.  We toyed with the idea of having a professional engagement session, but there were three factors that lead to an impromptu session with a friend and my camera:

#1 Location:  This mural we’re standing in front is in our neighborhood. When I flew back from California during our long distance relationship, I took the train in from the airport and when I came above ground, this was the first thing I remember seeing.  I was visiting the dude over the holidays to see if we were really the real deal and thus, if I should move back to Chicago from California.  Basically, beyond the colors that I love, the mural was a part of our story.

We tried to get photos in front of this mural three times, each time something went wrong. Construction took place on that train stop for two months in spring, causing a backup of buses in front of it.  Then, one day we tried to get the photos done, a CTA worker had parked RIGHT IN THE MIDDLE OF IT from 10-5pm…so hiring a photographer, as was my hunch, would have been even more stressful than it already was..you never knew if you’d luck out and the weather would work out while the location was clear. Sigh. 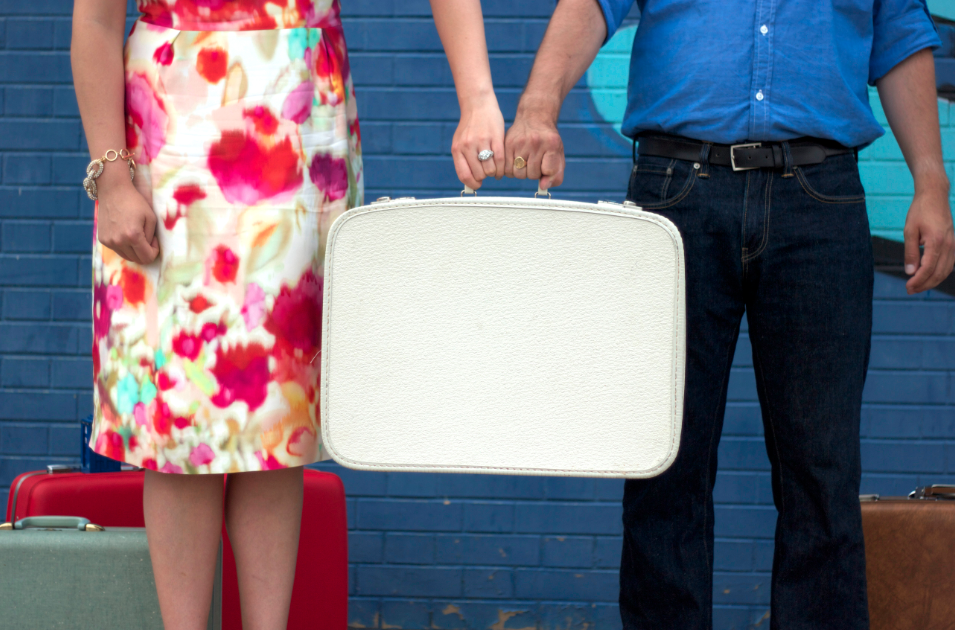 #2 Cost: Our wedding is already over budget. We originally tried to have a destination wedding in L.A. (where most of my people are from, including my Dad who does not travel) for $20k.  Since securing a backyard or a park was proving really stressful from 2,000 miles away- we opted for a venue that wasn’t going to take us to the cleaners.  Our budget is now, gulp, $30k (I know, I know… it’s not “frugal” but we are saving, making and cutting costs to get it back down) which includes the cost of our airfare, hotel stay and any services we don’t have bids for yet.

We’re hoping to cut costs on the invitations, flowers (DIY most likely), and my dress (which was overbudgeted for since alterations are a total scam from what I hear) and of course, any accessories I will wear.  I’m not spending $100 on a veil, sorry, JoAnn’s here I come!  Our engagement session was simply a few pictures in front of this particular mural and I didn’t feel like we needed a full session..I’d rather pocket the $400 towards the wedding day photographer. 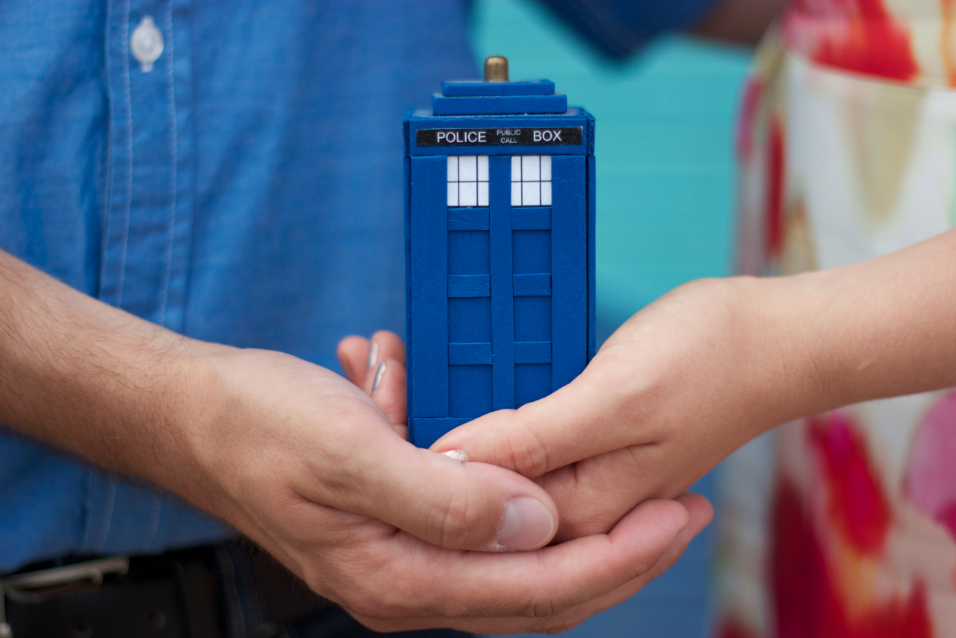 As stated, we had a few shots we really wanted, but beyond that, the shoot itself was really simple.  My awesome friend Lauren over at Champagne & Chambray came over after work and took the photos.  All day I fretted over whether there would be another stupid bus or car in front of the mural, or if it’d start raining, but luckily for us, it did not.  Originally

Haley from Fab & Fanciful originally trekked out to photograph us, but that failed due to a stupid car parked in the way all day (apparently city workers can do whatever they want even in a no parking zone and I wasn’t going to be the jerk that calls a tow truck), so, this time around I was desperate for the photos to happen and be done with!

We took a few photos with the TARDIS ring box my dude proposed with… Doctor Who fans out there, please give my man the appropriate virtual high fives.  We also used some vintage suitcases from the antique store. 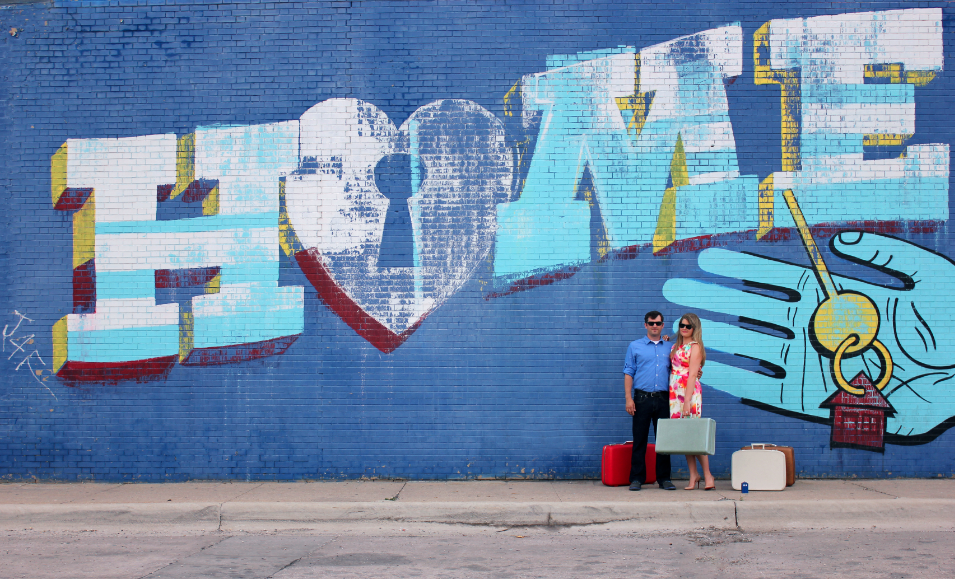 Funny story about wedding budgets, they are really a pain in the arse.  Case in point- the aformentioned vintage suitcases.  We went to 5 thrift stores trying to find one for this shoot, and to later use as our card box or decoration at the wedding.  We couldn’t find one anywhere, well, because all the antique stores bought them.  We finally found some at the antique store in the burbs…and one suitcase turned into four.  So, a budgeted “$10” project turned into a $120 project.

Yes, we paid $30 a piece for those stupid things…thus diminishing whatever savings we had by doing a DIY photo shoot.

Facepalm.  I am trying to get rid of the knots in my stomach by telling myself that the suitcases will also be used at the wedding and we will also be using them as decor in our house by stacking them as an end table.  Yes, I am totally grasping at straws here people.

Weddings are expensive, no, rather, stupid expensive, even when you try to MacGyver your way out of it, the glitter and pom poms for 175 people (includes kids) to try and save money is a tough road and nothing is free.  It may be cheaper, but put the word wedding in front of it and multiply it by over 100 people and expect to throw up in your mouth a little.

Anyhoo- our photo shoot was simple but filled with heart.  We’re planning a Route 66, “Home” type wedding with a lot of quirks, so I think despite my hard lessons in antique shopping and stupidity with construction, I think it came out alright.

What do you think?  Also, aren’t weddings stupid expensive?

How to Save Big Bucks on Your…

How To Save Money As a Bridesmaid

From A Bride Who Knows: How to…

11 responses to “Home Is Wherever I’m With You: Our Engagement Photo Session”