Are Home Delivered Meals Worth It? A Blue Apron Review 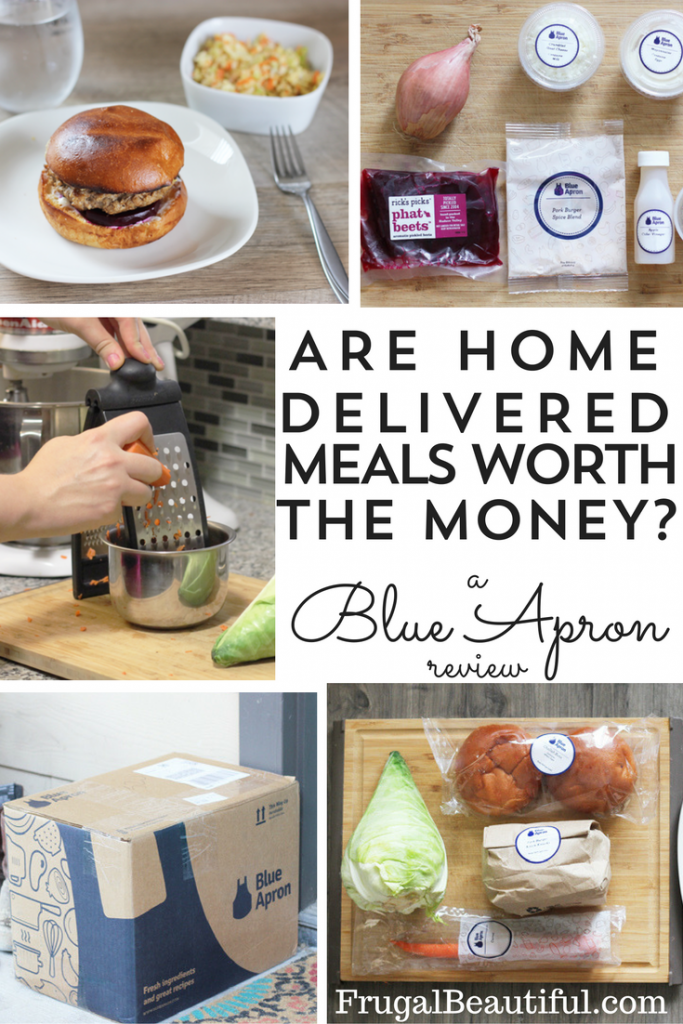 I have seen Blue Apron around for some time- having lived in various apartment buildings in Chicago and San Antonio, I usually see these little blue and brown boxes adoring the doorsteps of neighbors and have always wondered if it’d be worth it to try home delivered meals.

This year, I felt the push and pull between my reality and my aspirations.  The reality is that I’m usually busy and learning to try new things in the kitchen falls through the cracks, but I aspire to better at cooking (it’s honestly just a nice skill to have in your 30’s to really feel like an adult).  My attempts to try new recipes this year and stick to a meal plan have usually fallen flat with a few ill-fated Pinterest recipes.

If you’re like me, and you’ve had the good luck of finding Pinterest recipes that don’t pan out or take twice as long to whip up as the blogger indicates, you grow weary of new Pinterest worthy ideas and are vastly critical of recipes with poor instructions. We’ve had a few “30 Minute Casserole” recipes that took well over an hour and a half to prep and cook, even with cutting corners, and a few recipes we found online that were stated as being simple- but were anything but if you suck at chopping. 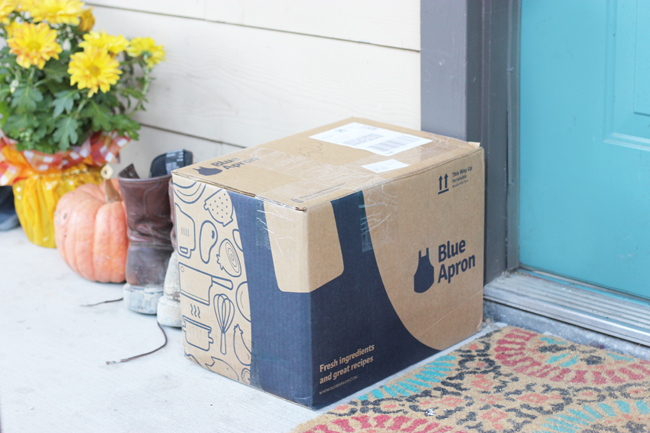 I was willing to give Blue Apron a try because I was hoping to bridge the gap between my cooking dreams and the dismal actuality of doing the work, especially because I usually forget at least ONE thing the recipe calls for when it’s new to me.  Seriously… every time I try a new recipe, some thing, usually a garnish, gets left behind.  Sigh.

At $59.94 a week for three home delivered meals that feed two people– I knew that a) the recipes would be well vetted and totally complete (no running to the store at the last minute because I forgot green onions) and b) I’d be forced to cook instead of relying on Lean Cuisines, since everything was perishable. 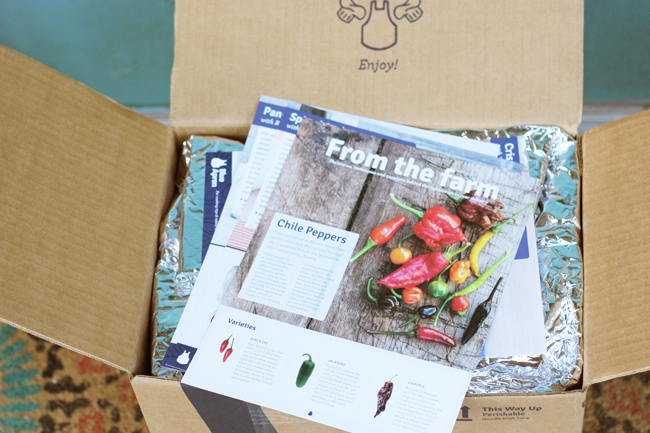 Preparing and Cooking with Blue Apron

Our first box arrived on Friday, so as I came home from a busy week- it was nice to know that my cooking explorations for the weekend would already be taken care of with little or no work. After a long day at the office, I strolled up to our front door, and next to my man’s concrete-clogged work boots were our meals for the next few days. Who doesn’t love a happy mail day?

As you open the box, each item included in your meals is labeled, with bulky items sitting in the box freely, and the “extras” are each bundled up in brown paper bags and clearly labeled. So you’re aware- if you don’t know the difference between an onion and a shallot (hey girl, I feel you) or cone of cabbage and lettuce, even the produce was labeled.

Yes, for those of us who aren’t domestically inclined, you can see below- even the carrot was labeled as such. I die. 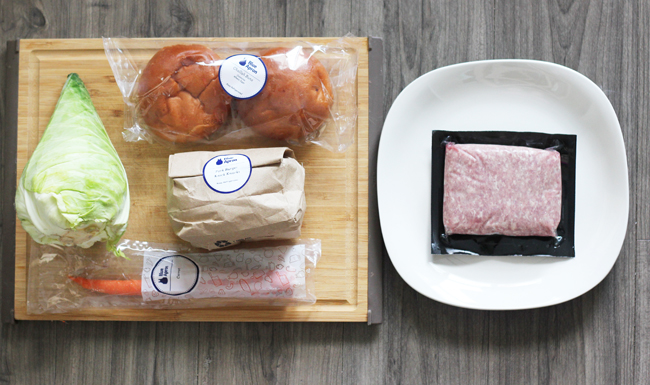 Our first recipe out of the gate were the spiced pork burgers with pickled beets & cone cabbage slaw. Who knew cabbage could come in cones? This girl didn’t. Not even remotely. 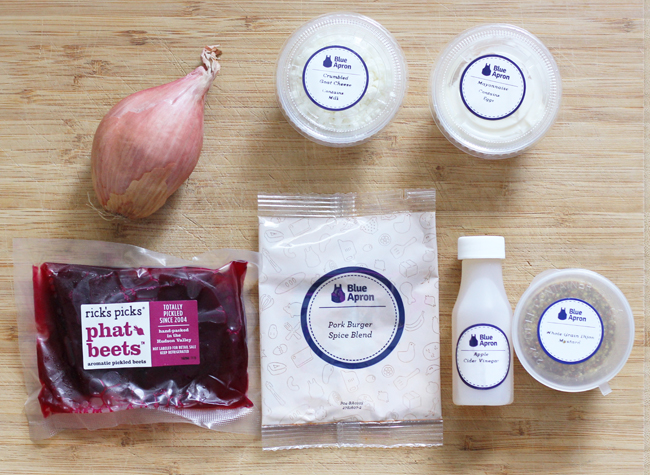 Even with fumbly hands and clumsy fingers, I was able to get through the recipe pretty seamlessly and within the time estimated provided on the recipe card (a biggie for me- recipe bloggers, stop lying that your casserole takes 30 minutes to prep, it never, ever does!) and I was happy. I messed up the cole slaw-  I dumped in all of the cheese instead of putting it on the burger, but it was still good! 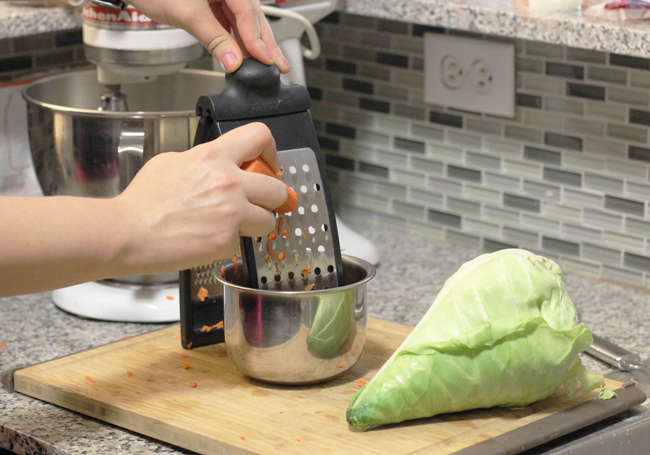 Fool proof, yay!  Even the fella was pleased.  It’s a win. 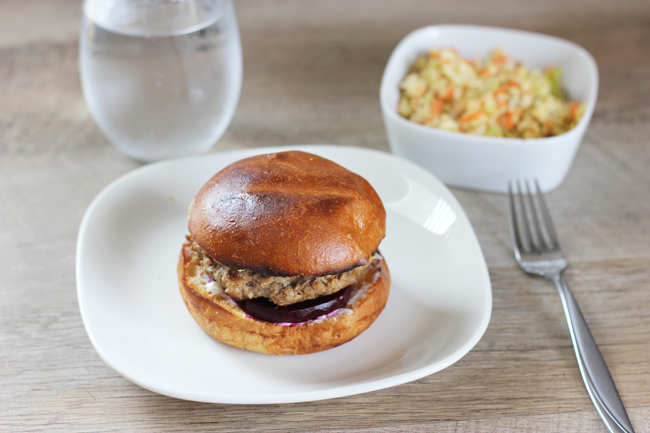 So what about the service itself?  For $59.94 a week, you can have some level of customization and you can easily skip a week if you need to. While you do have a somewhat set selection to pick from, you can choose what recipes are included that week- just make sure you make the deadline to skip or switch up your order!

What’d I think of Blue Apron?

I realize that going with home delivered meals isn’t the most frugal of options out there, but if you’re struggling to get over that steep learning curve in the kitchen, or you’re often falling back to bad eating habits because the store is out of the way or you’re working late, it’s nice to have a break in routine that actually simplifies things!

One thing I would say as feedback- is that I wish that the recipes were double batch- yes it costs more to send more product, but if you’re spending that much time in the kitchen and you’re not used to that much of a time investment, it’d be nice to have a bit of leftovers to show for it!

I made a delicious pan-seared chicken with roasted squash & apple, and I really would have loved to make a double batch since it was so good.

I’m honestly not used to cooking three days in a row to get through all the recipes, so there is a time commitment involved- so I couldn’t coast on leftovers between cooking days like I normally would, but it does help to get in the routine of batch cooking on weekends and incorporating it into your days off.

If you’re a solid chef or a pro in the kitchen who is used to meal planning- this might not be the plan for you. If you’re like me, and you still struggle after 5 years of living frugally to bridge the gap between Top Ramen on Wednesday and 3 hours in the kitchen on a Thursday night to make dinner, this might be a good fit.

The recipes were good, the meal delivery service was as easy as it can get, and it makes for a few creative date nights and skills acquired to boot.

If you’re looking for a meal delivery service like this- check out Blue Apron, and give it a spin! It’s competitively priced and a great way to get into cooking if you’ve had a few Pinterest fails like moi.

Photo Cards For Father’s Day Without The…

PREVIOUS POST
"What You Need to Know Before Going Car Shopping"
NEXT POST
"Styling With Remington Thermaluxe"
5 comments so far.

5 responses to “Are Home Delivered Meals Worth It? A Blue Apron Review”