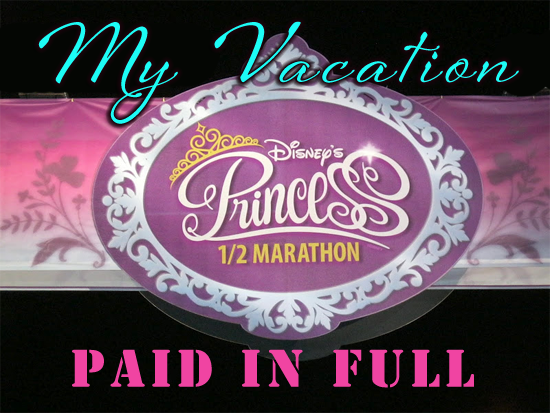 I’ve gotten a few reader questions about how I was able to afford my trip to Walt Disney World for the Princess Half Marathon.  I will have more tips on how I cut expenses really soon, but how I was able to fund this expensive trip, even after cutting costs is an article within itself!

As a frugal girl, I had total sticker shock when I began saving for the Princess Half Marathon.  While I cut costs wherever I could by planning on packing my own meals, looking for deals on airfare and splitting hotel costs with my running buddy- there’s no doubt about it, planning a trip to Walt Disney World to run a half marathon can be really expensive!

That’s even after I used as many discounts as possible & decided to pack my own food, DIY a costume & split costs with my boyfriend, it was still darn expensive!

I truly feel that frugal people can afford anything with the right planning, and planning is twofold:  plan to find deals as often as you can, but also plan to start saving money to pay for your travel far in advance.   Back in August, when I purchased my ticket for the Princess Half Marathon and booked my airline ticket (which I had to buy right away),  I knew it was going to take a serious savings plan to make sure I could pay off my runDisney vacation without relying on credit card debt to handle it and fund the rest of the trip in full.

The key to saving for any large expenditure, runDisney vacation or otherwise is to plan for a series of small, weekly saves and larger, impulse saves to boost your goals & sock away extra money to hit them faster.

I’ve been using ImpulseSave for awhile now to sock away extra money for a rainy day, but it was critical in helping me simplify my savings goals during the last six months to pay for my trip to Walt Disney World.  When I used the site to propel a goal I was passionate about, it was exciting to put money away instead instead of spending it!

Each week, I would put away around $20- the ImpulseSave interface instantly updates my weekly savings to approximate when I hit my savings goal.  Since I had already paid for my race ticket & booked my airline ticket far in advance to take advantage of earlybird deals (paid off), I still had about $650 of expenses unaccounted for.  My goal was to save at least $750 to pay for the rest of my trip and have it in the bank before I boarded the plane.  Looking at ImpulseSave’s timeline- I knew by putting away an automatic $20 a week, I’d have $480 of that saved automatically without much effort.

The other $270 would have to come from my “impulse saves,” of when I resisted temptation to buy something I didn’t need or was gifted some extra cash for Christmas.   Every time I earned extra money or decided to save money by not buying something I didn’t need- that money was quickly added to my ImpulseSave goal for my runDisney vacation.   I picked up some extra freelance work and sold some old books on Amazon to add money to my fund- Impulse Saving gets addicting when you see how quickly a few bucks shaves down your timeline! 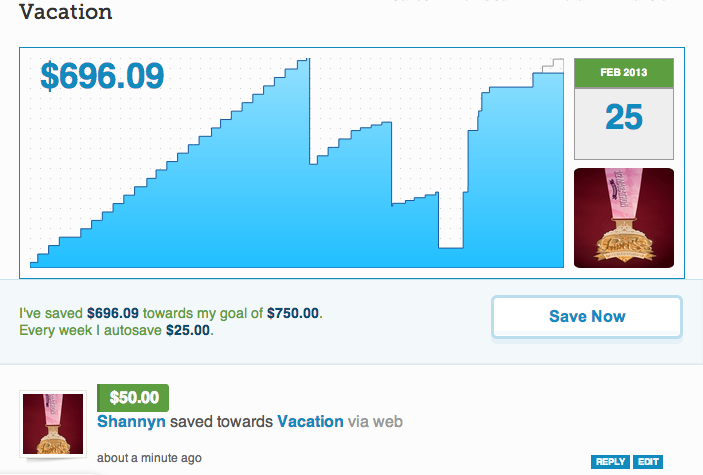 *Notice that dip? That was when I had an emergency funding issue, had to withdraw, and was so annoyed by my lack of progress I doubled my efforts to save that money back and will hit my $750 goal in time!

Honestly, I loved my experience with ImpulseSave because it helps you do two things:

1. It makes saving quick, easy and best of all- automatic. The money is transferred weekly before you miss it.

2. If you struggle with impulse shopping, the ImpulseSave interface makes it easy to reframe that behavior by saving instead of spending.

In all honesty, though I write a lot about finances, I am only human and previous to using ImpulseSave, I often faced big purchases unprepared since I didn’t transfer money to set aside for the future.  There are times when I know I need to save money for a major goal, to put cash away for an emergency fund or for travel expenses, but I simply don’t do it.  I couldn’t believe that I hit my $750 savings goal without the pain and frustration it normally takes to save.  Truly, if I see the money in my main checking account, I spend it- and when it comes time to pay for a major purchase I didn’t budget for, I’m caught off guard.

Using this system, I not only saved the $750 for my trip before I actually go on the trip (because darnit, it is fun to hit that goal), I’ve also set up new goals for my move to Chicago, an emergency fund and started a fund for a wedding (since I have more than enough time to save!).  Each account gets anywhere from $5-30 a week and I know exactly what date I’ll hit my goal and how much money I’d need to chip in to hit the goal ahead of schedule- so simple!

What money saving tips have you used to save for a big goal?

Disclosure: I have been a loyal ImpulseSave user for the past year and used their site to save for my trip to attend the Princess Half Marathon.  I recently had the opportunity to partner with ImpulseSave as a sponsor to talk about my user experience to save for this trip, but opinions and the data provided are entirely my own.

3 Fast Track Tips To Get Your…

Adventures In Frugality: September (Where I Still…