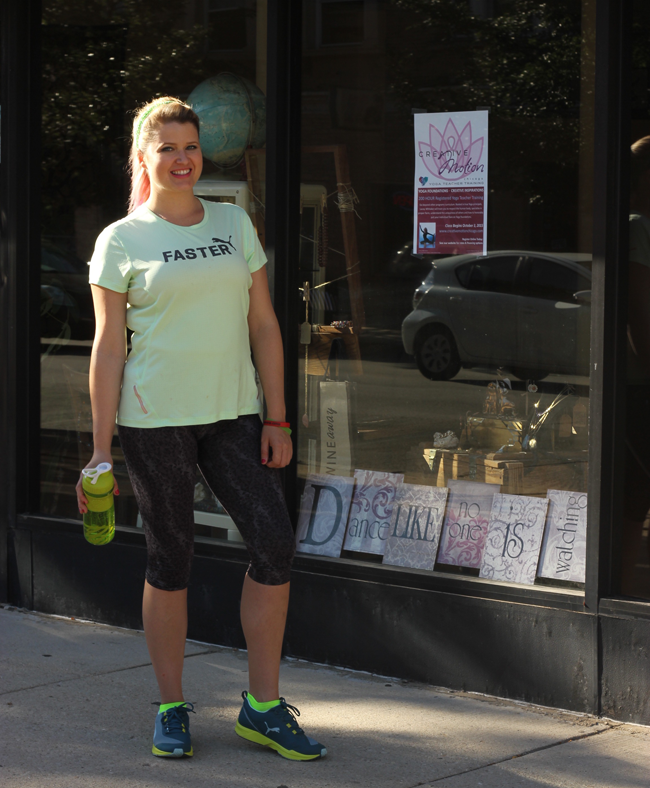 I have a love hate relationship with running. In 2013, I did over 13 half marathons and 2 triathlon sprints.  I was out running all of the time, and by the end of 2014, I was totally burned out.  It wasn’t until early spring of this year, when I ran the Shamrock Shuffle, an 8k, that I got back into running, but reluctantly so.

Over the summer, I wanted to start running again, but there are times that even being out there on the running path can be totally deflating.  For me, running has never, ever been easy. I’m honestly not a great runner, and still either do slow miles, or walk/run/walk method to get to a pace of what others would consider “normal.”

If I were to approach running the same way I did before, I’d get totally burned out, and quite frankly- I’m not at a point where running nonstop would be the quickest way to get towards my fitness goals and gear up before things cool off and the roads get icy again.  Plus, I’m not training for any long distance runs, and being out there for miles by myself isn’t as appealing as it used to be.   I am mixing things up this year- while I would typically just run and do fitness DVD’s at home, I’m adding in some fitness classes to the mix.

I recently got a Groupon for a local fitness studio that specializes in a fusion of yoga, Pilates, dance and bootcamp style workouts, so I’m really excited to use up a 20 class pass (it was $49 for 20 classes, that’s a silly stupid bargain!) and run to the studio and back.  The studio is about a half mile from my house, so I can get a jog in on the way over, do my cardio workout for an hour and jog back. 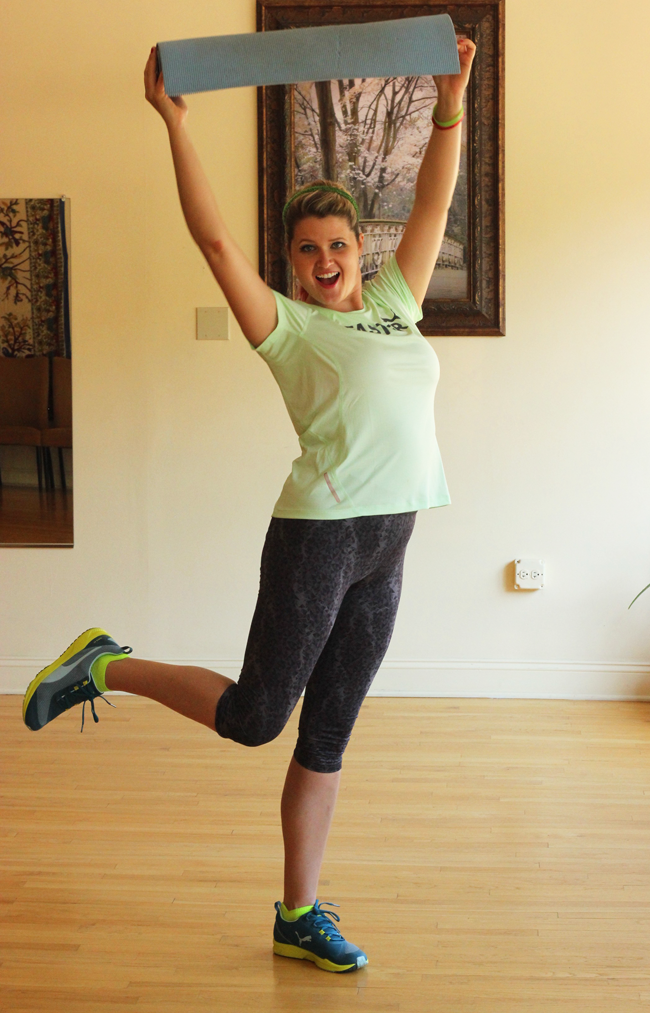 Fitness is a journey.  For a former couch potato and klutz, I’m challenging myself to be less shy about my fitness.

I was hesitant for years to take any fitness classes- thinking it would be expensive, crowded, or that I’d be the fumbly one in the corner who couldn’t stay balanced or hold a plank position for long enough, causing both the instructor and I much awkwardness when he or she decided to come over and give me encouragement, only to see I was woefully maxed out, leagues behind the rest of the class.

I figured that I could play catchup on my own, and by the time I came to class, I’d be totally ready for whatever they threw at me.  Seriously, we have weird things that play in our heads that tell us what we are or are not capable of.  I saw a Groupon for a group fitness studio that combined Barre, Pilates, Yoga and dance and decided it was time- sitting on the sidelines for the perfect time means that time never comes, so I signed up for a 20 class pass. 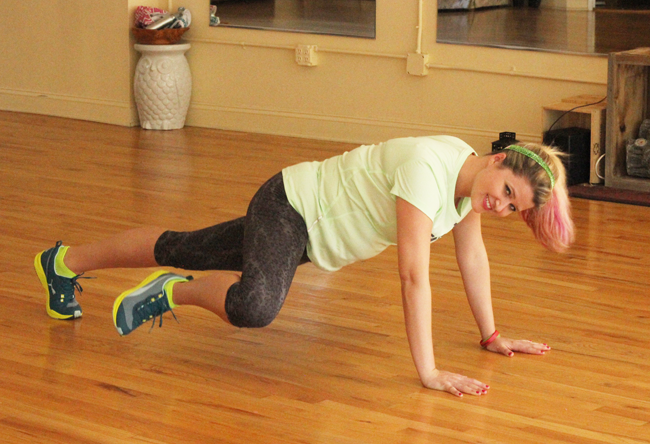 Funny story- when we were wandering through the neighborhood to take photos, the studio’s owner, who I’d taken classes with spotted us and invited us in.  Of course though, in total fitness instructor fashion, she also challenged me not to just stand and pose, but to get on the floor and do some moves.  The dance pose with the yoga mat above? Her idea.  Oh yes y’all, I’m out of my comfort zone and I kind of like being in this space!  I was bored with just running to the point that doing a mile was painful, but now, my mind and emotions are challenged.  Taking photos in a sloppy but totally genuine (I was honestly trying in the above photo!) hydrant/plank, is far beyond what I would have allowed a year ago… but that’s what happens when you hire a professional to help you with your fitness goals- they challenge you. If you could do it alone, you would have already.

I got the chance to try out some new gear from PUMA, and their new IgniteXT Training Shoe which is designed for enhanced traction, support, agility and energy return.  Since my new routine involves both running and high impact cross training and a bit of dance, I put them to the test: 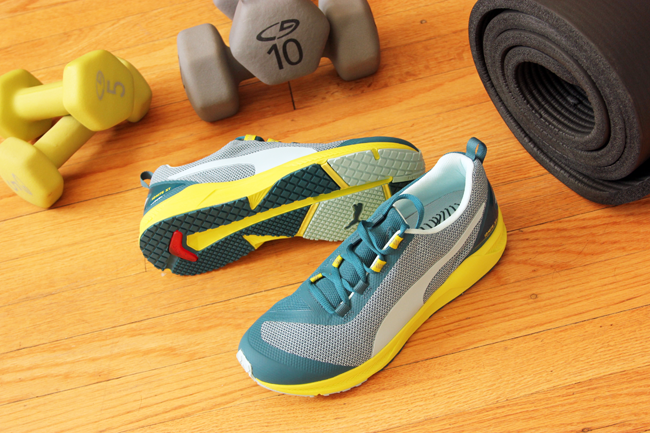 The shoe boasts features: a full length midsole for responsive, high-rebound cushioning, flex grooves on the outsole for fast dynamic multi-directional movements extra thickness around the heel to support lateral movements, and outsole pods that give traction without adding too much weight, which work well for the HIIT/dance combo classes I’ll be taking.

The shoes feel really grippy on the concrete, and had good traction inside as well.  The tongue is designed a bit different- it’s attached on one side, and the laces keep the shoe nice and snug, so your feet don’t slide out the back when you’re doing moves like jumping jacks or burpees. (God, I hate burpees.)  They’re a sporty shoe, but cute enough to wear outside the gym as well…which is another feature that I appreciate about PUMA, they’re always functional and cute! 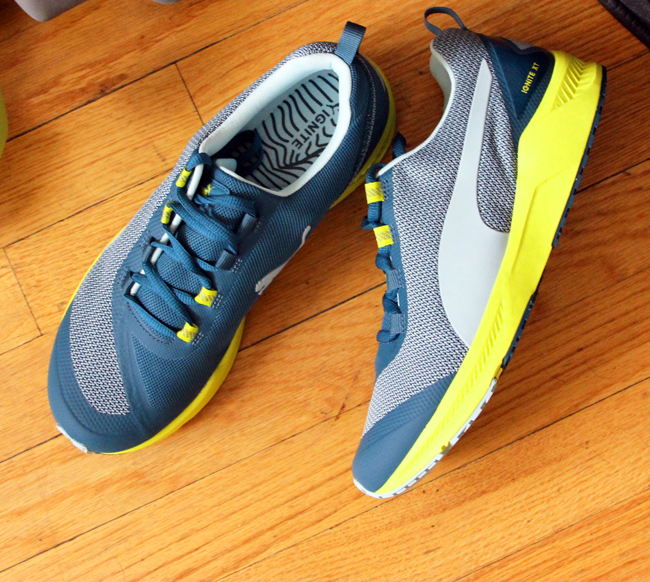 Check out the new IgniteXT Training Shoe to see if you’d like to add it to your gym bag. More resources are available for training, inspiration and product info at the PUMA training hub.

As for my new take on a fitness routine- we’re training for a 5k in Chicago on October 3rd, so I’ll let you know how it goes.

My running buddy and I will be doing some miles, but also folding in cross-training to get to our desired goal time, so stay tuned!  Honestly, I just want to stay consistent with fitness but really, have fun in the process.  Yes, some days working out feels like nothing like work, but I’d also like to dance a little 😉

This post is sponsored by FitFluential on behalf of PUMA.

How To Use Daily Deal Sites To…

How to Save Money on Craft Supplies

Need A Costume For Halloween? {A Review…

PREVIOUS POST
"How To Deal With The Fear Of Missing Out When You’re Forced To Be Frugal"
NEXT POST
"Frugal Living: Giving Back Is Part Of My Budget"
14 comments so far.