Is The Fear Of Going Broke Keeping You From Living? 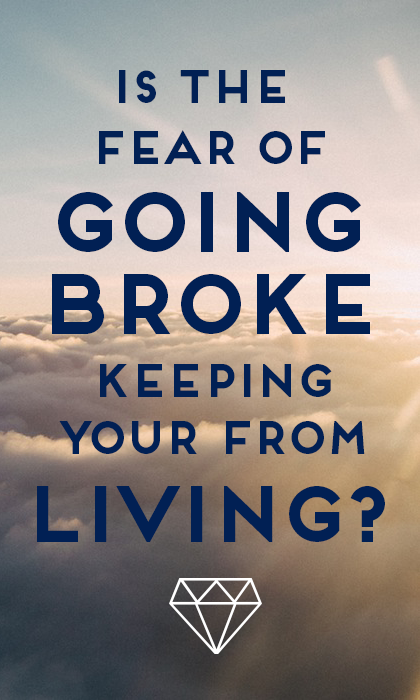 I was on a chat the other day with a good friend of mine that was telling me that she really wanted to relocate to a new city, but couldn’t do so yet because she was afraid of “not having enough money.” Before we delve into today’s post, let’s delve into the fear that surrounds having “enough,” and what it means to truly “be broke.”

Two years ago, I was getting ready to leave for graduate school which was a cross-country move with no job lined up. I didn’t get funding for my program and I was terrified of going broke. TERRIFIED to the point that I couldn’t sleep at night and I would start to draw up budget charts with Crayola markers as if that would help me better control each and every penny that came and left my bank account. I was micromanaging my entire life as if doing so would help me combat the fear of the unknown and most of all, the panic attack inducing fear of “going broke.”

Truth be told, if you would have asked me what “enough” money was, I couldn’t tell you. I vowed that I needed enough money to be comfortable and feel safe, but I couldn’t put a number to it. That idea, right there is the point of this post- unless you can put an attainable and realistic dollar amount to your fear, you’re letting it rule your life.  Most of us have never really been truly, hopelessly broke but the idea of being broke seem so scary that it guides our decisions.

When all was said and done and I finally started living in the city, I needed to make $1,000 a month to live comfortably. That would cover everything- rent, utilities, food, entertainment and of course money that might as well have been burned. Problem was, I rarely, if ever, made $1,000 a month as an unfunded graduate student working a part time job and I started to dip into savings.

The first few months I had to use my emergency fund, I went into panic mode. I started going over my Excel spreadsheets and guilting myself for not being able to live within the $800 a month I was making (yes, I realize now that was crazy, but when it was all I had, you can imagine I was going to try like hell to make it work and regain control!) My savings account got smaller and smaller- I could feel myself plummeting into my impending doom of bag-lady living, going destitute and being miserable. I thought life sucked now, and it was only going to suck more when I went completely broke.

Guess what? Two years later, I have LESS in my savings account than I did two years ago. I have nearly no money saved (not that it’s anything to brag about, but I am debt free and most of my student loans are nearly paid off.) I have about 3 months of living expenses set aside, and while that isn’t ideal, I want to make the point that I’m better than I have ever been.

Truth is, there are people living on half of what we have and they’re twice as happy.  We’re not as afraid of going broke & hitting bottom as we are of having “less” than someone else.

The main “demon” that I tackle on Frugal Beautiful is debt- especially consumer debt. The bulk of young women I deal with are grappling with debt from shopping addictions or fancy apartments they couldn’t afford in a down economy, the rest of us are simply trying to live with what we’ve got and are struggling to save up a nest egg. Yet, as I had this conversation the other day, I had to wonder, how many of us are hiding behind the idea of “having enough money” and it’s preventing us from doing what we really, truly want to do?

Some women never need an excuse to do what they want (usually though, this is in terms of buying stuff) yet there are plenty of us who grapple with guilt and punish ourselves for not having enough. Additionally, we may hide behind the fear of being a bag lady without a decent emergency fund to the degree where we never take a risk, relocate, go travel, start a business or quit a job we hate simply because we cannot fathom what it’s like to not have what we have now.

I can tell you from experience that if all the money you had now were gone, you’d be okay. It would suck, but you would survive.

There are plenty of people that truly are on the edge of disaster with their savings where one small emergency could lead to home foreclosure, a lawsuit or necessitating they sell off everything they own to have a roof over there head- I would wager that most of us are nearly not that bad off… the worst we would face would be canceling memberships, taking a second job or selling off *some* of our stuff.

I strongly feel that most people who have never experienced poverty have no idea how little they could really live off of.  I don’t think anyone that has had to actually “just survive” knows what true, simple survival is like-  but the idea of having to give things up, to change a lifestyle, to not live up to the standards of “well off,” that we’ve set for ourselves scares the bejeesus out of us.  We cannot truly be scared of living on the streets because chances are, that would never be an issue- the heart of the fear is change, uncertainty and feeling insufficient.

Most of us, even on our worst days would never actually be homeless- someone would always help out.  We would never be homeless and hopeless, that’s beyond comprehension for the average person, what we truly fear is losing our privilege and our minds are running amuck with doomsday scenarios that will never actually pan out.  The fear of sacrifice and living on less (read: NOT living on NOTHING) is what keeps us from quitting a sh*tty job, marrying our lover or relocating to our dream city.

We have nothing to fear but fear itself, because trust me, if you allow yourself to take a risk and sh!t hits the fan, you will amaze yourself at your own blood, sweat and ingenuity to make it right again.

Or, you can live in fear and never know what it’s like to feel free and self-sufficient, your choice.

The Best Advice On How To Survive…

PREVIOUS POST
"August Call For {Small Business} Sponsors!"
NEXT POST
"Yes, I Can’t Run A Mile But I’ve Signed Up For A Half-Marathon"
18 comments so far.

18 responses to “Is The Fear Of Going Broke Keeping You From Living?”