We’re Engaged! How We Designed My Engagement Ring 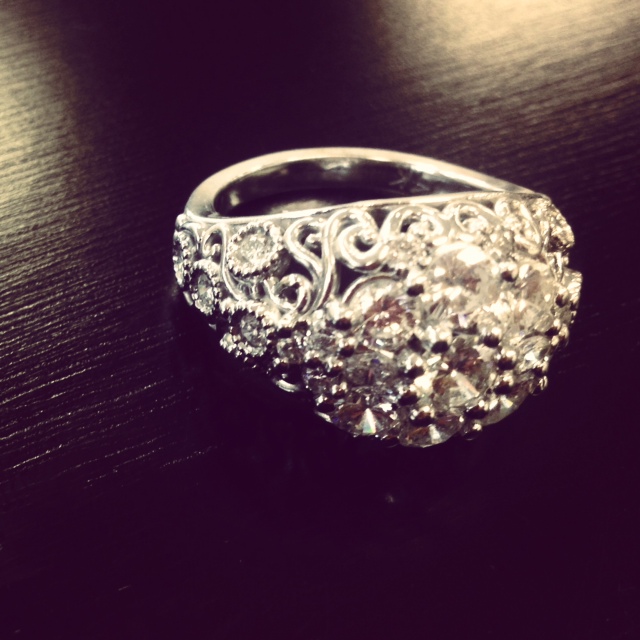 I’m really excited to blog about this news…. I’m engaged!  The engagement itself was a surprise, but the process of getting a ring ready took some time, as we decided to use some heritage pieces that were passed down through my family.  I’m very fortunate that I was given my grandmother and great grandmother’s engagement and wedding rings to use for my engagement ring and our wedding bands.

I wrestled with the idea of redoing the rings since they were such special gifts, but after talking it over with family and friends, it seemed just as fitting to celebrate their legacy by joining their two rings into one and being able to wear both rings as one piece as we start our married life together.  Initially, I was worried about changing their rings permanently, but being able to wear both of their rings instead of having them sit in a drawer for years and years, seemed like a special way to commemorate their legacy- I still see them every time I wear my new ring.

In the initial phases of ring shopping, we did look at settings that would either just use one of the diamonds or find a setting that would work with the diamonds that were given to me.  The process at first was overwhelming and frustrating- most traditional settings I liked had one giant center stone with teeny diamonds on the side and nothing seemed to work with the stones we were given. 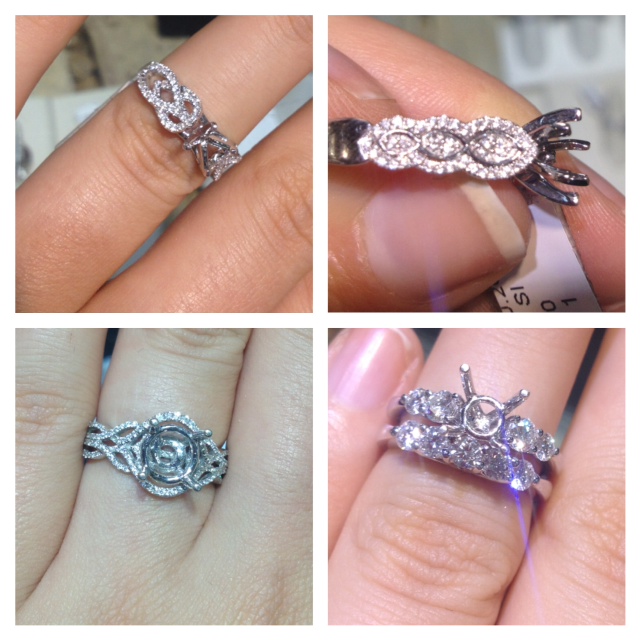 I tried on a lot of rings, and after a somewhat frustrating session, we decided to go home and think it over- nothing seemed right.  Choosing a setting that would only use one stone meant the rest would sit in a drawer for years unused- plus, any paving of teeny diamonds I didn’t already have would start to add up quickly- the savings we would have using some of the diamonds but adding others to work in an existing setting started to wash out.

We decided to sit down with the jeweler again a few weeks later- this time bringing in the rings and seeing what we could come up with.  Honestly, completely resigning two rings into one still made me nervous- I had no idea what would work with what we had to work with and was totally unsure if I’d be able to come up with something that…gulp… I would wear for the rest of my life. 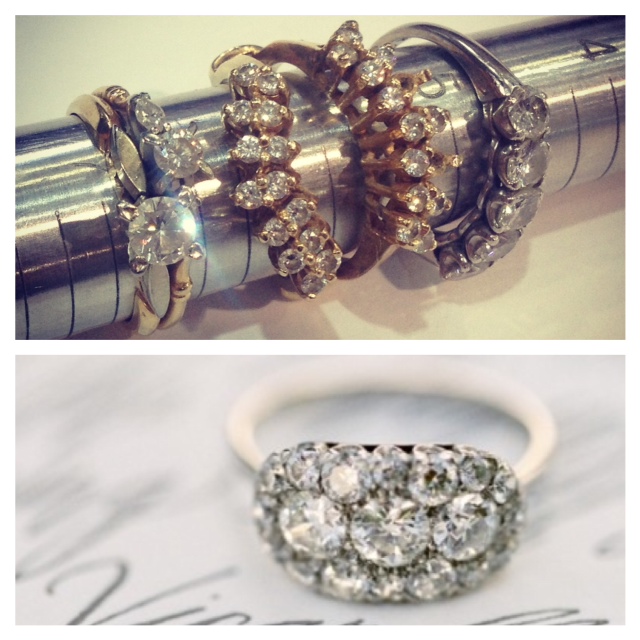 The picture above is of the rings I was given (yes, I feel so totally blessed) by my Gram and great grandmother.  The ring below has been on my Pinterest board for quite some time (see? pinning comes in handy!).  I never thought it would be useful until the jeweler asked me to pull up any random ring designs that could be useful.  Then, after seeing this one again at the jewelers- it made sense:  we would use all of the diamonds in a “hodge podge” look and see how it came out.

We left the jeweler that day with some random ideas and a whole bunch of different sized stones that wouldn’t work in a traditional setting. The jeweler came up with a C.A.D. (Computer Animated Design) and emailed us a mockup of the ring after a few days.  This is what we came up with: 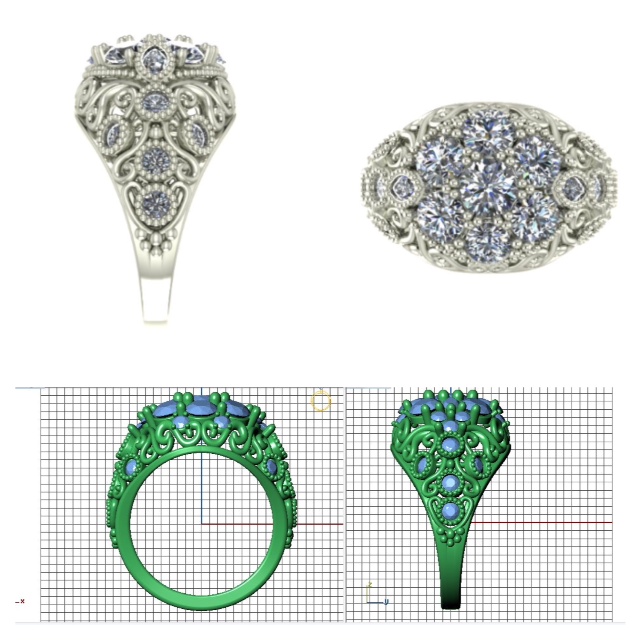 After some minor adjustments and emails back and forth, I came up with a design similar to this, but with less of a “daisy shape” on the top, and more of an oval shape using diamonds, and less embellishment on the top of the ring itself.

I was super nervous to give the final call and have my ring cast in wax, but knowing that I would be able to see it in person before we committed to having it set in metal was a huge relief.  Does everyone else agonize this much about their engagement ring?

After a few rounds and emails back and forth, the wax casting was made and we came in to try it on.  Typically, to preserve the shape of the wax and preserve the setting, you can’t try it on- but luckily they took pity on my nervous heart (what if it was too bulky or felt weird on?) and let me delicately try it on. 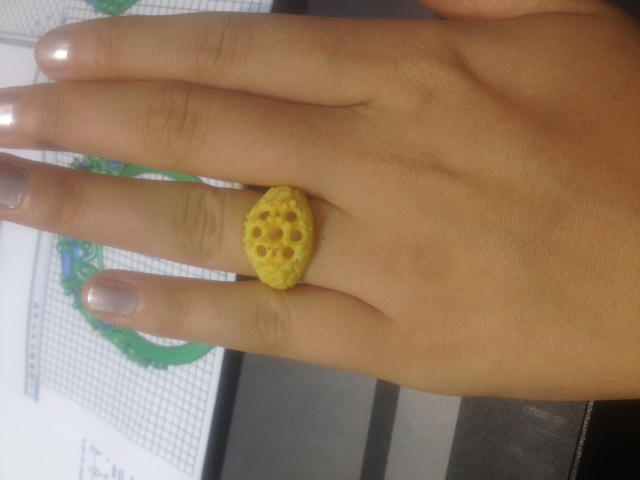 I got to try it on and a deposit was made.  We left the store and it was officially out of my hands until the Mr. decided to put it on my ring finger with the most epic question he could ask me.

I totally thought it would be a few months, but apparently, it was burning a hole in his pocket.  The weekend I was in Nashville, he picked the ring up and by Tuesday he had popped in a TARDIS ring box (yes, Doctor Who fans rejoice) to ask me said epic question.  He drove me to the spot where Route 66 begins in downtown Chicago and got down on one knee. 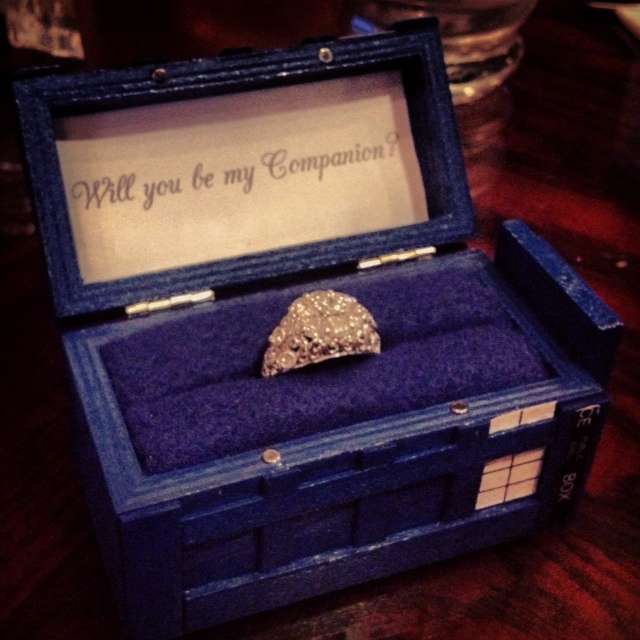 Of course, I said yes (like there was ever any question!) but man, after that I was pretty speechless.

Designing my own ring was a unique experience- admittedly, I was a bit nervous about creating something from scratch but it’s turned in to something special.

We used every part of my the existing rings- all parts were recycled into my engagement ring and our wedding bands.  The only thing we had to pay for was the consultation fee for the design, the white gold for my rings- but the rest was melted down to be his wedding band.  Honestly, I feel so blessed to inherit this gift.  We saved a lot of money by using materials in the family, and it’s extra precious to us as we start our lives, to know the materials that formed our rings have so much hsitory.

All in all- this process saved us a LOT of money.  We paid about $300 for the consultation and paid for some additional white gold to make the engagement ring.  So for about $1500 we created my engagement ring, his wedding band and my wedding band- a total blessing!

Obviously, not everyone receives this type of gift- but if you’re able to use any gold, silver or stones from your family, it can save you a lot of money or greatly reduce the cost.  You may end up with a different look than the “standard” three stone engagement ring or a different metal than you’d hoped for- but it’s a great way to save and to commemorate your family’s heritage if you have some materials you can recycle from brooches, rings, pendants or necklaces.

5 Ways To Make Your Frugal Wedding…

Why You Should Start Saving For Your…

My Plans For A DEBT FREE Frugal…

25 responses to “We’re Engaged! How We Designed My Engagement Ring”