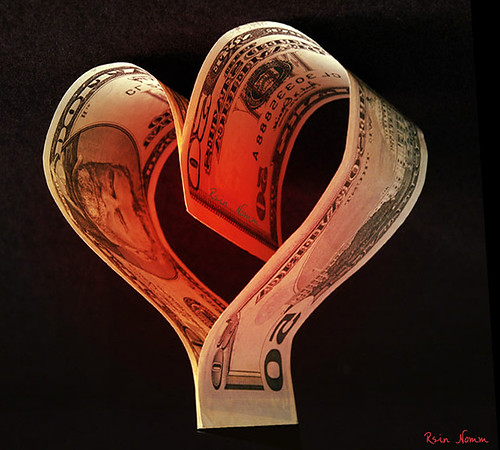 I recently finished reading Emotional Currency by Dr. Kate Levingson (see my review here) and in her book she helps readers identify their relationship with money by looking at their everyday purchases.

In August of 2008, I lost two very dear loved ones in the same 3 day period- my grandmother and a special mentor and friend, both of whom were like mothers to me.   After Gram’s passing, I was left with some extra spending money from our shared account, but no loved one.  I ran out and decided that I needed to fill up the emptiness and quickly spent a few hundred dollars on impulse buys of clothing, dinners out, videogames and books.  Part of the spending was also my attempt to craft a new identity in the loss of my role as “grand daughter” and “caretaker,” but I realize this wasn’t a healthy identity shift, more like a hurried rush to re-create myself with different clothes as soon as I rolled my shopping cart next to the rack.    There was no rhyme or reason to my tastes- I just consumed.

Simultaneously, I held onto whatever items that my Gram and I had purchased together to build a home.  I was able to part with her clothes and some of her accessories and furniture, but the things that seemed most personal- our holiday decorations and her knick knacks sat untouched for nearly 2 years.  It wasn’t until I decided to move to Chicago almost a year and a half after her passing that I was able to assess my behavior.  I was able to purge the items that weren’t able to “hold on” to my Grandma, but instead were holding me back in the grieving process, and was finally able to realize that I didn’t need to shop and acquire new things to hide from the loss.  It was powerful to be able to see how my actions were contradictory and unhealthy, but were sourced from the very same traumatic event in my family.

After I moved to Chicago, I started to see again, that my spending was tied to seemingly unrelated emotional needs and experiences.  By now I had been able to part with much of Grandma’s things, and donated nearly a truck full to one of her favorite charities.   Being so far from my family for the first time was exciting, but stressful.  I had to spend a decent chunk of change to get established- to have furniture, clothes that were suitable for cold winters, and items for school.  This time, my spending again was emotional, but manifested my feelings of loss in different ways.  I had no choice but to spend (try surviving snow without a coat and boots!) but I felt immense guilt and anxiety with every transaction.  My emotional ties to money had transformed- I now felt intensely guilty for spending my grandmother’s money, since I was now far away from the home we shared and donated many of her things,  Grandma’s money was symbolic of my memories of her.  Spending what she’d left me felt irresponsible- like my need for a coat, furniture or supplies wasn’t as good as having that number in the bank, a measurement of her legacy.

In some analysis, I realized that my emotional attachment was causing me a lot of stress and worry that wasn’t helping me make smart decisions or make the most of my time in Chicago.   I am now able to look at my purchases, and not just what I purchased, but how I felt about it afterwards to better understand the emotions that sometimes rule our financial decisions without realizing it.

Do you have any tactics that help you analyze the emotions behind your purchases or financial decisions?  Do you have a 30 day waiting period before purchasing, or do you try to run it by a friend?   What helps you identify your emotional currency?

Personal Habits That Helped Me Get Out…

PREVIOUS POST
"Stupid-Quick Money: What Is Your Stuff Costing You?"
NEXT POST
"Why I Blog:"
2 comments so far.

2 responses to “Your Emotional Currency”