Many people roll their eyes when they hear someone citing the “power of attraction,” or the importance of a positive mental attitude-  ever since the commercialization of The Secret and the commercialization of self-help by what feels like a million “self help gurus,” many of us are rightfully annoyed by anyone piping up about all that “power of attraction” mumbo jumbo, I myself, am one.

For the past year, my life has undergone a complete overhaul.  This time last year, I was getting ready to graduate with my master’s degree in sociology and was totally deflated about the idea.  I had moved to Chicago two years prior to get my M.A. with the idea I would earn my Ph.D. and become a college professor, but within weeks of starting the program, I realized that I was walking down the wrong road.  I could see the path before me, crumbling at my feet as the economic and political realities of working in my “dream field” began to sour before my eyes.

By the time I was approaching graduation last spring (I finished the degree simply to get my money’s worth, apparently universities have a no-refund policy and you can’t put “1/2 a M.A.” on a resume), my whole life was in tumult.  I knew I didn’t want to be a professor early on in my program, so I began to build a blog and discovered a more applied sociological approach to work- I wanted to work in marketing, not academics.  I built the blog up enough to get me through school and launched my own social media consulting business, Cake Mix Media.

I knew that graduation was coming fast and that moving on from the rough patch in my life as a graduate student meant serious and swift change.  I was unsure of what would come but I had to have faith that anything would have been better than the life I’d been living-  on $800 a month, on dates that went nowhere, unsure about my career and hoping for more.

I had dreams I didn’t want to admit-  I wanted to have a partner I could depend on (yep, I wanted a boyfriend..and not just any boyfriend..a damn good one!), I wanted work that I loved, a place I could call home and the ability to travel, explore and experience the world.  Coming from two years of rough living on low income and endless course work I didn’t find fulfilling, this seemed like a lofty venture, especially to myself.
I wrote the below “Future Me” letter in February, 2012. I scheduled it to send on a random day a year later and totally forgot about it.  The email arrived in my inbox, the day I started my dream job as a social media coordinator for a racing company I’ve admired since I started running last year… (cue creepy music here). 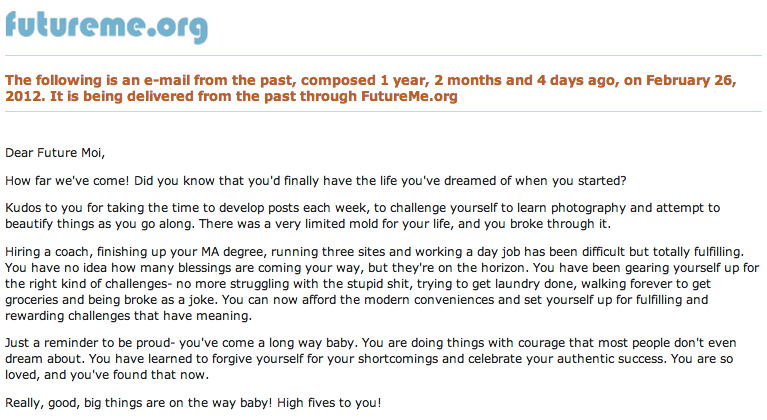 As I write this letter- things in this note came true.  The email arrived on a date I randomly picked over a year ago- not knowing what the future would hold, and it arrived the day I started at my new company.

A year ago I was deeply dissatisfied that my life was “frugal” but not very “beautiful.”  I had been working multiple jobs as I grew my freelancing gigs, I was chronically underpaid and was living in a less than comfortable situation.  I often envied other bloggers that had a home of their own (even if it was rented, they made it feel like home) or had the extra income to do fashion posts, or chronicle their family vacations and fancy dinners.

At the time, I had to walk four blocks with a suitcase full of clothes to do my laundry- rain or shine.  I didn’t have insurance, a reliable air conditioner, a car and going to my favorite place to shop (Target) was a 40 minute train ride…and yes, I would carry everything back to the apartment.  Not to whine, but I longed for convenience, security and the things that most other people took for granted (like not having to lug back toilet paper and dog kibble in the snow after a long train ride, haha!)

I don’t write this post to boast- I am here in awe of how much things can change in a year if you sit down to admit what lacks in your life and commit to changing it.  I write this post to give you hope- if you’re not happy with how your life is going, own up to it.  If you “should” be happy, but you’re not (as I felt wanting to get a day job when everyone else seemed to be trying to strike it out on their own and bucking against the idea of a “day job”)  own up to your dissatisfaction, without judgement, and commit to changing your life- a year from now, you’ll be so surprised at how far you’ve come.  A year makes a world of difference…it’s a long time from now, but will seem like the shortest and most worthy year you’ve changed when you look back.

So…how has your life changed in a year?
Have you ever written a “future me” letter?

The World Domination Summit 2012: A Pair…

The Craziest Week Of My Life…A Death,…

PREVIOUS POST
"The Nike Women’s Half D.C. Race Recap …and a Tiffany Obsession Amplified"
NEXT POST
"Some Runners Will Never Be Fast- Words of Encouragement From A Slow Runner."
15 comments so far.