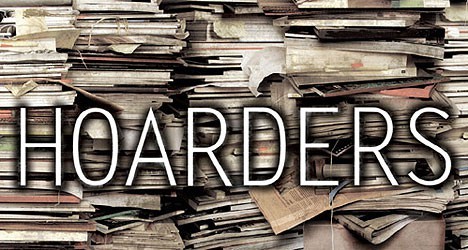 Hoarders is a show that’s as disturbing as it is fascinating.  So why do people love watching this show?  Are we just sick individuals who like to watch the dysfunction of others? Or are we simply fascinated by human behavior as it collides American consumerism?

There is some debate as to whether hoarding is hereditary as a mental illness or simply the result of socialization or trauma.  As you watch the show it’s clear that hoarding is the result of poor parenting, mental illness, personal trauma and behavioral issues that manifests itself in compulsion.  At first I felt terribly guilty at what seemingly seems to be a tv-peep show of human suffering until I had the realization that I was watching because the show hits a little too close to home.

I grew up in a hoarding situation so I can completely understand how some people are raised to be hoarders.  In a hoarding household, children learn an unhealthy attachment to things as being irreplaceable markers of emotion, identity and memory.  Things suddenly become unreasonably real and unbelievably personal- a pair of shoes that have been outgrown and unusable become embedded with attachment and warm memories.  The child begins to associate the events and feelings experienced with the item as the item  and parting with even a broken, dirty or unusable item feels like a betrayal of what it represents.  Emotions like guilt, loss, regret are entangled with the item itself.  Just as a Rosary or crucifix is a representation of something sacred, personal and divine- all items in a hoarder’s life start to take on this strong symbolism.   Items begin to be cluttered as they represent the person’s past.

Additionally with hoarding, items become irreplaceable representations of self and the person’s past- but they also become bargaining chips for the future that a hoarder uses as an escape.  Letting go of anything feels like you’re betraying your past happier days and losing grip of better tomorrows you hope the items will bring.

Clutter quickly turns into hoarding to justify a strong need to find usefulness in everything, or to “waste not, want not” and to cope with life’s traumas. Hoarding occurs to fill one’s life with the potential of what could be since often their current situation can feel hopeless or occurs to cover up a sense of loss.  As I mentioned- I grew up in a hoarding situation- it’s just the way it was and I didn’t know any different.  All of the triggers for hoarding mentioned above seemed to come into play into my childhood and hoarding was just the way we lived.

I didn’t realize that I had a problem until I decided to leave home and go live with my Gram at age 16.

It was then, after filling a truck full of stuff for the move- much of it truly meaningless, I started to pitch all the knick knacks and the failed intentions they represented.  I had become a hoarder and a mindless accumulator who had assigned unhealthy meanings to the stuff I had accumulated, even junk  was personal and clothes that didn’t fit had an emotional hold over me.  I felt powerless and overwhelmed by the massive amount of things I had collected over the years.  I simply didn’t have the energy to deal with it, and I began to let it go. Truly not just the things themselves but the powerful emotions I had previously insisted be attributed to them began to smother me. I wanted to be rid of the things and the painful memories I had previously felt charged to keep- no more.

It’s taken years to let go of the unhealthy attachments that I was raised to attach to things.

In 2007, my frame of mind completely shifted and I found myself facing the habits of my upbringing directly when my Gram and I were evacuated due to wildfires.  Fire came uncomfortably close to taking everything we owned and for the first time shook my relationship with “stuff.”  At the thought of losing everything to fire, my life was re-prioritized but it wasn’t until 2010 when I moved to Chicago that I really had to face the music and purge.

After years and years of having an unhealthy relationship with stuff I finally feel it’s under control- my apartment is a bit cluttered but it’s organized, comfortable and I know I could survive if I lost it all tomorrow.  I don’t have the emotional attachment that I used to, but in watching Hoarders I am reminded at how emotion and experiences entangle themselves with the meaning we attach to our things and how easily it can get out of control.  Even now, it’s hard for me to admit my “past life,” on the blog  or to anyone- thinking of how bad it was still looms over my head and I feel lucky to have been able to forge my own healthy path.

So do you watch Hoarders?   What has the experience of the show been like for you?

PREVIOUS POST
"Love and Money: Are You Training People To Treat You Poorly?"
NEXT POST
"XoXo- Radiant Cosmetics Lipstick Giveaway"
30 comments so far.

30 responses to “Confession: I Watch Hoarders…and I Was One.”