Is Black Friday Actually Worth It? 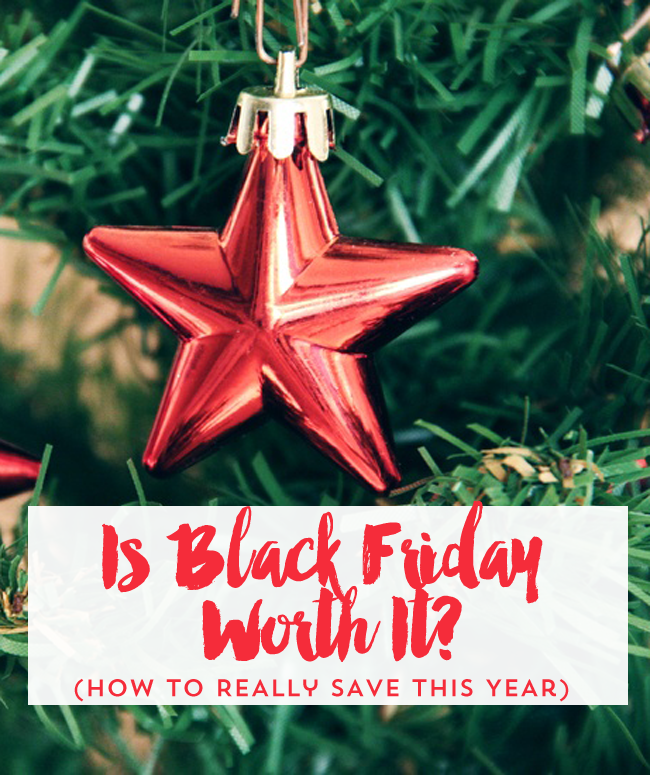 Please don’t hurt me for talking about Black Friday now, but to be sure you’re smart about the holiday marketing that’s coming our way pretty much….since Halloween, it’s good to be prepared to cut through the hype as it starts hitting even before Thanksgiving.  My local Target already has the Christmas section up, so I figured it’s time to fight back with some anti-marketing!

I’m going to be honest here- I have never waited in line during Black Friday to get a deal.  While some of my friends are giddy to take a quick powernap post-turkey and pack up to camp out in front of Target after Thanksgiving, I’ve never actually taken part in this tradition.

Honestly, I find it just too ironic that the DAY AFTER (sometimes not even then, just hours after) we break bread to give thanks and celebrate the things in life that money can’t buy, people line up to shove each other out of the way and spend gobs of money to prove how much they love their family…when that is sort of…anti-Thanksgiving in my book?

Regardless, I’m not a big fan of the Holiday Hunger Games, where we selectively take each other out to get the prizes in the center of the stadium, but looking at the research, it seems that it’s all for naught.  To the point, looking at the numbers, it seems that regardless of how fun it is as a sport, Black Friday is a total gimmick.

Yup, the numbers show Black Friday is typically a ripoff.

– Chances are, to get the best deals, you need to be one of the first twenty people in line.  Stores have super limited qualities of the best deals, so they know that most people who don’t get them still won’t leave empty handed, and will in the heat of the moment, snatch up subpar deals.

– Black Friday inventory (especially with electronics) are usually comprised of parts that are cheaper or limited features.

– Markdowns usually mean that things were marked up to begin with, with only the perception of savings.

So, how can you save this holiday season?

– Plan now to ensure you’ve scoped out a real deal. Is there something you really want to get a good deal on- like a Keurig, TV or Cricut machine.  Do a price comparison now and see if cheaper options are already available as a refurbished piece or as a closeout.

– Take notes of what things cost now, and see if they’ve been marked up to “markdown” later.  Going in with a plan ensures you aren’t buying a perceived deal, but an actual deal.

– Sites like Gizmodo and the WSJ have compared BF deals and find that the same items are listed year after year at the same prices.  That being said, you can map out a solid plan, if you choose to participate in Black Friday- by simply looking at last year’s deals.  Additionally, most sales are “leaked” before Black Friday so you can determine if you’re really getting a bargain.

– Skip the lines and participate in Cyber Monday instead, which readers and experts have said typically have better deals, plus, you have the ability to comparison shop rather quickly from home.

– Be very aware of the emotional triggers and deceptive tactics marketers use to get you to buy on Black Friday. If the item you’re shopping for isn’t a good deal or is sold out, know you’ll be surrounded by other items that are intended to play on your survival/hoarding instincts to stock up on stuff you don’t need that isn’t a deal at all, just be aware! It’s sort of like how the checkout register is stocked with candy and lip balms, it’s designed to get you to buy more.

– Local boutiques and small businesses also take part in Black Friday, and you can save quite a bit by shopping local and they don’t have the marketing teams geared to snag you into overspending…plus, they’re nice people.

What’s my strategy to save instead of shopping at Black Friday?

I know the markups are typically pretty steep in order to create the perception of deals around Black Friday and Cyber Monday, so I’ve already started with a list of things I’d like to snag at a discount just in case they go on sale-  A Nespresso machine for me, a Keurig for Dad and a Kindle Fire HD for someone on my list.

Hint:  The great thing about flash deal sites like the two I use is that you can also get referral credits, and this is how I usually save $100-200 a season, simply by sharing the link with friends and family.  Zulily offers a $15 credit per sign up and Hautelook offers $20.  That adds up fast!

I also do all of my shopping online.  I snagged some new Tory Burch flats last year on a Black Friday deal, and even got a free pair of Tory Burch Sandals out of the deal, pretty cool huh?

I’ll have more ways to save on Black Friday & Cyber Monday if you choose to participate as deals are released this year..but if you have any tips, please leave them below so we can learn from you!

My Fancy A$$ Christmas Wishlist….Santa, I’ve Been…

How to Save Money on Craft Supplies

PREVIOUS POST
"Give Thanks, Laugh A Lot, Smile. Teaming Up With St. Jude + KMart #TheGivingHat Giveaway"
NEXT POST
"Our Ultimate Zip Lining Experience With Vallarta Adventures"
4 comments so far.

4 responses to “Is Black Friday Actually Worth It?”