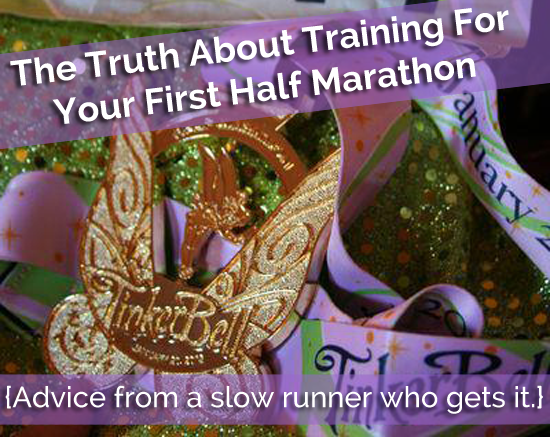 You can read all the blogs (like I did) that has scores of advice for new runners and first time half marathoners, but until you get out there and start clocking miles, you will feel as awkward as you did when you began to walk.  Running is a process, and you have to fumble through it for the first few months, even well over a year until you feel like a runner in your core- regardless of what you call yourself.

Running is as mental as it is physical.  Being a runner is a social process and a deep, quiet inner reflection.  It will challenge you to your core if you take it seriously and choose to race-  the act of running balks at your stereotypes, your preconceived notions of what’s possible (and who it is possible for) and it requires you to override the tape that’s been playing in your head time and time again.

Not Everyone Does Better Running With Friends

Running is both social and deeply personal.  Some thrive by having someone push them, others shut down and just need to run their own miles.   Sometimes running with a training group or in as part of 40,000 person race will make you feel part of something bigger and peer-pressure your way to a PR, or, it could make you feel totally stressed and shut you down.  One thing I always wanted when I started running was a running buddy- but as I got more experienced, I’ve discovered that while running with a partner serves as a pacesetter or motivator on long runs for some, it totally stresses me out.  Not everyone gets amped up by running with a friend, partner or colleague and that’s cool.

Some of us need to go through checklists in our brain and focus on the motions when we run-  it’s okay if you’d rather not worry about your running buddy and instead, fly solo to be completely focused on your pace, form and focus on not dying on mile 10- embrace it.   Some like to run in packs, others are lone wolves- it takes time to discover which you are.  As much as I love the idea of running with my friends and peers, I’ve found I usually worry about their pace and screw mine up, or I get distracted and forget my rescue inhaler.  During the Princess Half Marathon, my second half ever- I ran with my boyfriend and pulled my knee on mile 3, the idea of holding his progress back despite his many attempts to comfort me didn’t help- I felt guilty and stressed the entire race.

If you’d rather run alone, let your buddy know and realize that you won’t missing out on any bonding time if you’d rather just meet up at the finish line.  You can start together and (nearly) end together after the chip times are in, but the miles in between can be spent in your head- that’s OK.  13.1 miles is a long time to be fixated on something other than your running.

Running At A “Conversational Pace” Is A Cruel Joke

What is “conversational pace?”  I’ve heard of it many times, but I have yet to find it.  Apparently, it’s the pace where you could still have a conversation with another runner or at least get a decent sentence out without falling over.  If this were true for me, my conversational pace would be walking and we better hope there isn’t a hill… and yes, I’ve run 6 half marathons (this year alone) but I’m still weezy fo-sheezy.  Even if I wasn’t desperate to breathe, not everyone wants to talk about the latest celeb gossip while trying to tackle the miles.

If you feel bad you haven’t found the mystical unicorn of “conversational pace,” while out on a run, you’re not alone.  For must of us mortals, even the really fit ones, it’s a shiny myth and it doesn’t mean that you’re just not good enough, it just means you’re working hard and social chit chat is not why you’re running.  If you find a conversational pace without having to try, well, good for you- ride that unicorn to the finish line!

Building endurance isn’t just a physical endeavor, you’re also training your brain.  Your brain is learning not to get bored with repetitive motion for hours on end, and mainly, it’s learning to get comfortable being uncomfortable.   Your brain is going to process pain, boredom, fatigue, limiting beliefs and the other signals your body is sending you in unique ways, but like any muscle- it takes building.

If you want to be successful at running your first half marathon, know that as you build your mileage, you need to build your attitude, grit is made over time over many, many miles.   You may not have the mental strength to get through what your body is able to- you may get scared, tell yourself to quit, feel so bored or procrastinate to the point of quitting, but day after day, you build your brain to become an endurance runner. If you don’t train your brain and pay attention to the things your head is saying on runs, you’re missing the other critical key to your training. The tape playing in your head and the muscle memory is key to moving forward.

Appearances Do Not Equal Ability

I’m a mid 20’s, healthy lady with an average BMI and youth on my side- but I have been beaten by women twice my age and twice my size.  Sometimes seeing what “should” be a frail lady at 80 pass you can be defeating, other times it’s inspiring.  When it’s defeating, you start to criticize your own body- “why can’t I go faster?” “I’m young/lost weight/trained/didn’t smoke…why aren’t I faster?”  You may have friends that smoked and ate junk for years suddenly get on a fitness kick and blow past you, you also may see people just starting out on their journey to lose weight totally kick your butt towards that finish line.  Ya, sometimes bodies are lies and life isn’t fair.  It sucks when by all standards you “should” be ahead of someone, but aren’t.

Here’s the thing- everyone is on a journey.  You cannot compare your insides to their outsides- you don’t know where they’ve been and how far they’ve travelled, but more so, I want you to know, at this stage, you still don’t know how far you can go and how much better you can become.  One race is not an indicator that you’re an out of shape failure, but it is a milestone of the journey you have just begun to see so don’t sell yourself short.