The 5 Things I Learned About Student Debt In College 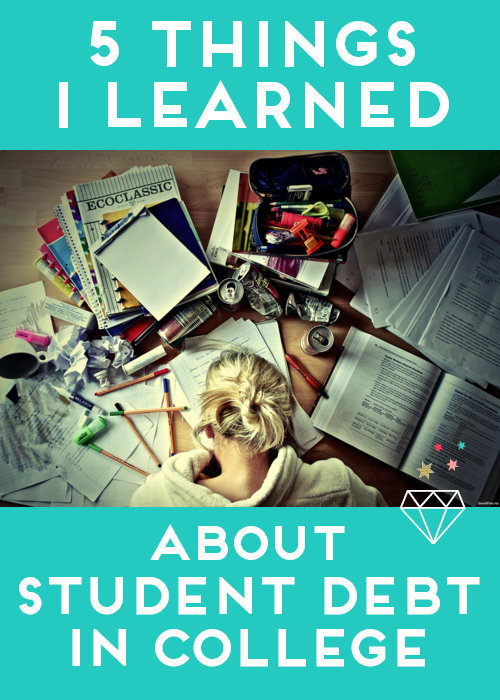 1.  Colleges are like large shopping malls- your college is a brand like any other with merchandise to match.

I remember how shocked I was when I saw advertising for my college all over the city- on buses, on billboards, and yes, on PANDORA radio.  Universities are a business like any other-  many students are buying the “label” or the name of a school without understanding if their particular degree from that university will be worth the price tag.

Don’t worry, school branding (and the cost) doesn’t stop at your acceptance- you get to buy the lifestyle and the merchandise to match!  I’m not sure how we stack up to our parent’s generation, but today’s bookstores are stocked with “designer university” gear to show the whole wide world you’re educated with complete branding from head to toe:  University branded stickers, water bottles, t-shirts, teddy bears and $80 “designer inspired” couture sweatpants with your school’s logo (I kid you not.)  A student doesn’t just attend, she “wears” her school’s brand- and typically, it’s paid for in student loans and credit cards.

Looking back, I always had an inferiority complex because my school wasn’t as prestigious as those of some of my friends.  Knowing what I know now, I graduated with less than 1/3 the debt they have and they didn’t fare any better on the job market than I did.  Not all degrees, school names or majors are created equal- don’t by the hype, know what you’re paying for. You want to make sure you have a quality grad certificate.

2.  Tuition & Living Expenses Are Rising-  Return On Investment For 4 Years Of Educational Investment Is Slow.

The American Dream isn’t so much about home ownership anymore, but now is sold early: attend the “best” university you can.  The dream has been bought and sold without students truly understanding if their career choice will enable them to pay it all off before retirement time.  The fact is that many students are unrealistic about how long it will take to pay off their debts.

“I’ll be able to afford it,”  or “My career advisor told me that I have to go into debt into this career field.  It’ll pay for itself,”  and my favorite of all time “Everyone’s in debt, I’ll deal with it when I graduate.”  These are some of the most common lines I hear time and time again when I ask students and former students about their debt.  Some act as if they didn’t have a choice, and truth be told- some low income or first generation students don’t have a choice.  It isn’t so much that students are in debt but that they are in way too much debt without the ability to pay it back in a reasonable amount of time.

What scares me the most is that many students don’t realize that student loan debt is not dischargeable in bankruptcy-  it is the one debt that sticks with you.  What scares me nearly as much is the common attitude that you have to go into gobs of debt to get a “good” degree and thus a “good” job, but we’ve seen that this equation isn’t flawless and most all, even with a good job, debts never seem to get paid off as soon as one hopes.  When kids graduate with $100k in student loans for a B.A. or M.A., the debt doesn’t stop there- they get further backlogged by other expenses like cars, weddings, homes and medical bills. Student loan debt gets compounded by “life,” and things don’t get paid back as tidily as many students predict.

3.  The Dichotomy Between Rich & Poor Is An Illusion Upheld By Access To Credit.

In reality, something purchased on credit that you cannot pay back is not something you truly own– when you’re in debt, those things you buy own you.  Debt means living on borrowed time that is translated from borrowed money.  Students  are often forced to live beyond their means due to the high expense and investment of schooling and being able to bring in income, but many are living far, far beyond their means because they have access to credit cards.

When I moved to Chicago for grad school, I was shocked at how many of my fellow students were on government assistance (A.K.A. food stamps.)   all of these folks worked at least part time and still couldn’t make it past the poverty line even with scholarships & assistance. These students were getting by on a mix of student loans, scholarships, assistance and part time jobs with the occasional help of a credit card to get by month to month.  At the same time, I’d walk across campus to see kids with designer clothes on, eating fast food & living on campus housing furnished by IKEA or Pottery Barn.   While some of those kids had rich parents, some of them were surely masking the reality of their situation with consumer debts.

What happened to the cliché of college kids living on chump change, eating Top Ramen off of furniture composed of cinder blocks and plywood?  Those kids still exist, but the only thing  separating them from the kids who “had it all” weren’t necessarily rich parents, but access to credit and the willingness to use it frequently.  Just like out in the real world- being “well off” is an illusion purchased on borrowed time for many college students who are dodging the collector.

4.   Many students are in nearly as much consumer debt as student loan debt.

As mentioned, at both my undergrad in California and my stint as a grad student in Chicago, I saw a variety of realities-  but was always shocked at how nonchalant young people were about their debt.  At the time I attended my undergraduate institution, tuition and expenses were still competitive for a state school- averaging around $2,000-$3,000 a semester.  In comparison to my graduate school- that was a bargain!

What astounded me is talking to my sorority sisters and colleagues from social clubs on campus is the fact that while they would take out $10k to cover tuition and books, their consumer debt was sometimes equal or greater to their student loans and at triple the interest rate!  Students would sometimes shrug off their consumer debt and attributed it to the nature of the beast- just a normal part of “college life.”

What I found shocking was the number of kids who went to a more affordable state school to save money, but would end up matching or exceeding their subsidized student loan debt with consumer debt at double the interest rate.   Many would save money on tuition only to make up for it with car loans, shopping, summer vacation trips or expensive housing packages and off-campus apartments.

5.  Most students don’t realize how deep their debt is and continue to spend until they’re faced with a bleak job market.

What I’ve learned from college is that this is the critical time when spending addiction takes hold.  Students who are excited about living on their own are suddenly approached with credit cards, freedom and endless shopping choices.  Pair that with the mentality that they’re “already in debt,” and have “four years to worry about it,” can sometimes means students get a taste for what they can’t afford.

Student loan debt can be deferred due to financial hardship, though it will still accrue a 6.8% (or higher) interest rate during deferment.  What I’ve seen time and time again, is that many students don’t understand that not all debts are created, or thus, penalized the same.  Many rack up huge consumer debts or attend schools out of their price range- sometimes going into debt into the triple digits thinking that “they’ll pay it back,” when they get a job…but what happens when you can’t find a job?

I’ve been told by conservative estimates that one should expect to search for a job for at least 6 months.  If you’re lucky, you’ll have a paycheck by the time student loans are due, otherwise, go into deferment or if you’re also in consumer debt- you might default!

A year after graduating, I started to talk to some of my college friends who admitted to having to make drastic cuts to their lifestyles to be able to handle their debt load- with what some might argue, perks they shouldn’t have had to begin with:  gym membership, salons, cable t.v. and regular trips to the mall.  Many thought they could make it work or that they’d come out on top despite the bad economy.  I’ve seen more than my share of desperate Facebook posts & Craigslist deals from overspending recent grads who have to sell off their stuff, and fast.

What lessons did you learn about money & debt from college?

What do you wish you’d have known?

Is The Fear Of Going Broke Keeping…