The $10k Scholarship Was Rigged

I was very happy to be selected as a finalist for a $10,000 blogging scholarship.  What wasn’t fun was finding out that in under 12 hours, several people already had thousands of votes and it was growing by a cool 100 votes every hour (consistently.

In less than 24 hours, some folks had 1,500 votes.  In less than three days some people (with an Alexa Rank in the millions and less than 10 RSS subscribers) had OVER 35,000 votes.   I even got guff from a contestant’s friend on Twitter that I was being alarmist and underestimated the size of the internet.  You know, since there is absolutely no way to plug in predictor variables into a formula to be able to predict with some level of certainty what is plausible given a limited number of factors.

THE INTERNET IS MAGIC AND PEOPLE ARE HONEST!  Take my degrees- they have been rendered irrelevant!

After I stopped laughing since I know that while it IS PLAUSIBLE for someone with 3,000 Twitter followers to have 45,000 votes in less than 72 hours, doesn’t mean it was LIKELY, I then resorted to wanting to throw the laptop against the wall since aside from being totally hilarious it was awful at the same time.  Oh did I mention that almost consistently the same few people were getting 75-100 votes an hour?  Apparently I have no faith in miracles if safeguards/screening procedures aren’t in place. 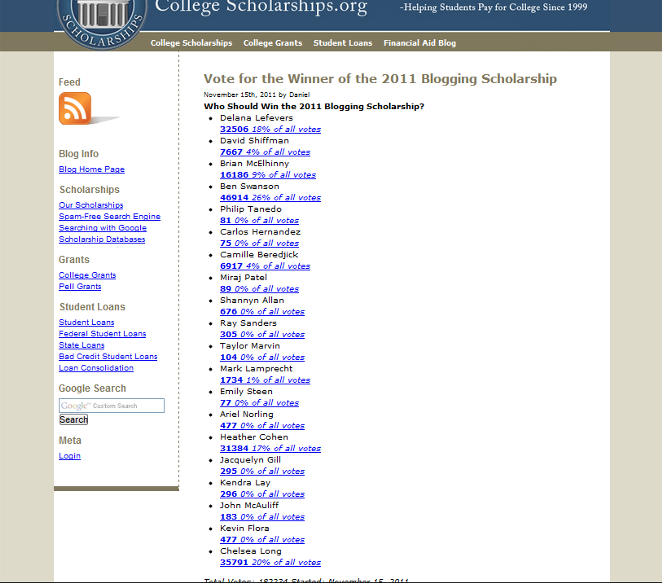 I got an email last night that they’ve re-calibrated the voting and we start from scratch.  It’s apparently “much harder” to cheat.  We’ll see.  They also now allow voting once a day and show percentages, not actual voting numbers (perhaps so it’s harder for us to cry foul?)  Not sure how I feel about tweeting and rallying the vote again after that.   There is still no email validation, no captcha and though I haven’t tried, but I bet if you clear out your cache you can vote multiple times.

Or, if you’re cool, you can have your bot vote you. I’m not cool.  The only non-human that I would let vote for me is Data from Star Trek but that’s neither here, nor there.

Regardless- here is the link to vote for me at CollegeScholarships.org.  You can vote once daily.

It is hard to prove who cheated (though I don’t think so) so everyone that had the population of a small town in votes still gets to run.   I’m sure they learned their lesson, right?

Of course, this is the internet and people are transparent, honest and say kind things on people’s blogs!

And also- this is America.  If I want to cry foul, I can.  The internet may be big but I’m a statistician and this cr*p and PREDICTION RATES are quantifiable.  God Bless the Interwebs.

Are You A Giveaway Maven (Or Do…

Ads Are Ignored & The Mad Men…

10 responses to “The $10k Scholarship Was Rigged”